Seniors deserve some slack, but Louth can no longer claim to be proud after 'worst performance of the season' 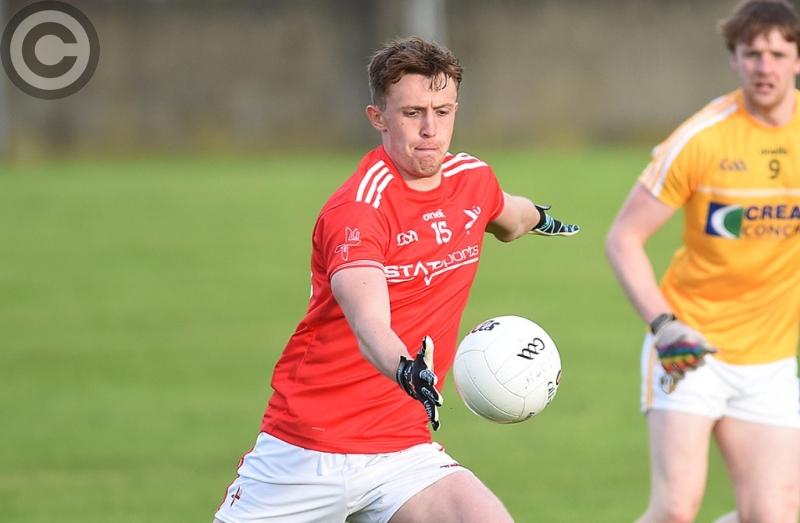 Ryan Burns has an effort at goal during Louth's All-Ireland SFC qualifier defeat to Antrim at The Gaelic Grounds, Drogheda, on Saturday evening. (Pic: Arthur Kinahan)

Can we now conclude, without fear of attack, that Louth football is in a desperately low place? Worse than is on record.

The seniors have to be cut some slack in that their league effort, considering the state of affairs when Wayne Kierans took over, was better than expected and the players have worked diligently with the team management all year. It’s not through lack of preparation that their season has come to an end rather shudderingly.

It’s the rest that’s simply a mess. No leadership from the top, clubs unwilling to intervene, underage structures that are a waste of resources and woeful results at all levels. Is it any wonder that followership of the senior team has dropped off as a general air of apathy has engulfed a once proud county, Louth and proud et al?

Losing to Antrim could perhaps be the final straw. After all, it followed relegation for the hurlers and the U20s’ demolition earlier on Saturday - three defeats, albeit in drastically different circumstances, that follows a miserable campaign for the minor footballers and the juniors’ exit from Leinster to Meath.

“We can definitely improve our overall structure, but, to be honest, I wouldn’t feel right commenting on it today,” Kierans said post-match, as he used one of The Gaelic Grounds’ tunnel walls for support as disappointment dripped from his face.

“I’d have a lot to say on it, but maybe not today, because we didn’t do our job today.”

Emotions were running high. Simmering, rather.

The game turned over a five-minute spell in the first half. Having conceded the two opening points, Louth’s burst of 1-5 to no-reply included a palmed goal from Andy McDonnell in the 15th minute - Sam Mulroy the provider after gathering a desperate kick-out from Antrim’s Pádraig Nugent.

But a pair of three-pointers from Matthew Fitzpatrick tilted the affair on its head. And it wasn’t as if the Antrim man was made to work overly hard for either as the Louth defence parted.

There was something of a revival coming into half-time that saw the Reds end a quarter-hour barren spell with Declan Byrne among those to register, but Ryan Murray’s third of the half sent the Saffrons in with a 2-5 to 1-7 lead.

Yet the second half turned into a nightmare and gave Kierans plenty of scope to call it his side’s “worst performance of the season”.

“For some reason we were flat, sluggish and didn’t get the basics right after the first 15 minutes.”

An accurate summation. Although Louth were in contention towards the end of the second half’s opening period, trailing by two, they hit another lean patch after Conall McKeever’s 48th minute point as Antrim tagged on six in succession to bound clear.

Louth hit the post at the beginning of both halves - Ryan Burns and Eoghan Duffy the effort takers - and that was touched upon afterwards by several stakeholders. However, nothing in the performance would suggest the outcome could have been anything different.

The general mindset looked skewed and certainly not in a state aligned to winning a championship match.

“We didn’t make the right decisions and we’d no composure in the game,” added Kierans.

“If you take the composure we had in the game against Down in the league, compared to today, it just wasn’t there.

“We made bad decisions and had poor plays - they all accumulate into a performance that’s really nowhere near winning a Division Four game or a Division Three game never mind a championship game.

There is really no avoiding the topic of discipline and not for the first time this year. Having finished five of seven league games minus the full complement, a nasty streak once again bore its head in the closing 10 minutes.

Fergal Sheekey saw red having appeared to strike an Antrim player in the goalmouth, while Declan Byrne was dismissed for two bookable offences. The latter was unlucky to a degree as his challenges were honest, just off, but Sheekey evidently lost the head through pure frustration.

“We lost the discipline, we ended up with 13 men,” the manager observed.

“Had that been a tight game we would have lost it anyway, similar to the Longford game (in the league). It’s another disappointing factor - one of many.”

The entire match was comparable to another Longford encounter, though; the one from two years ago, Colin Kelly’s last in charge, when three Louth players were sent off and the Reds received a hiding at home.

Indeed, that was a season of promotion through Division Three and a convincing defeat to a big-hitter, Meath, in the Leinster Championship. The qualifiers almost seemed to be a hindrance to the players getting back to their clubs and so Longford steam-rolled their way to the second round.

“The record is there, you can’t deny the results or the stats.

“I was sure that this group would be able to have a good run in the qualifiers, but with performances like that, we’re just a million miles away.”

A million miles away on several fronts, it would seem.