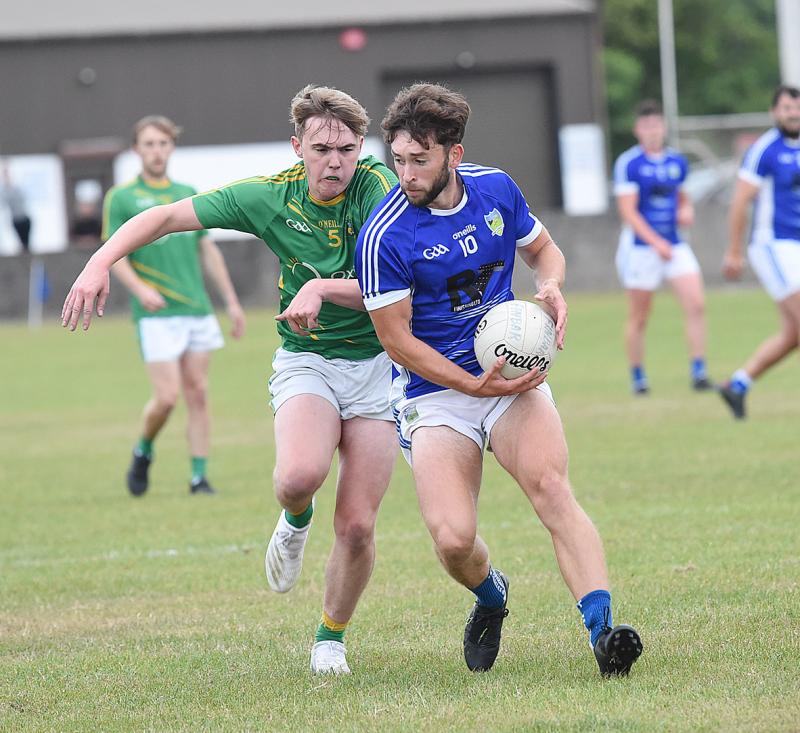 Roche Emmets did what they had to do against O’Raghallaigh’s at home in Rathduff to secure a place in the top six for phase two of the league. With the Drogheda side already secured a place in the promotion pack, Roche had more to play for and that motivating factor showed it in their play.

The hosts were in control throughout and led 0-8 to 0-6 at half time. Shane Byrne was excellent with seven points on the night as Jamie O’Hare’s side suffocated the free scoring Ragh’s down the other end, with county man Gerard Browne catching the eye.

Kyle McElroy and Ben Rogan tried in vain but Glen Stewart’s three points from the middle of the field held the hoops at bay.

Roche needed that gap because they very nearly pressed the self-destruct button when Barry Flanagan made it a nervy one-point game with a late goal. Emmets would hold out to deservedly take their place in the top half dozen of Division Two.

A controversial end to this clash in Pairc Eire Og  saw the teams share the spoils after what proved to be a well-contested Division 2 clash.

At the final whistle the referee declared the game a draw despite the fact that many in the ground were of the opinion that the Young Irelands had prevailed by a point.

Despite the confusion, the result didn’t alter either team’s position as the Plunketts ended the first phase bottom of the table, while Young Irelands were safely in the top six having only needed the draw to advance.

Peter McStravick made the difference for the hosts as he finished with 1-3, while Dermot Mone weighed in with five points. The only goal of the game came in first half injury time to see the Dundalk men lead by 1-7 to 0-7 at the break.

Cian Brady was in fine form for the visitors and his seven points ensured that the Drogheda outfit were always in the game. His final score came in the last minute of the game and proved to be the equaliser.

O’Connell’s gained what could be two very valuable points going into the second phase of the league when they had a six-point victory over Kilkerley in Páirc Chill Choirle on Saturday night.

Cathal Bellew got the first point of the game and a free from Tadgh McEnaney put the home side two in front. Robert Quigley got the visitors first point and Quigley and Darren Geoghegan shared the next two to make it 0-3 to 0-2 after ten minutes.

Quigley landed his third point to level the game but the Emmets then hit a purple patch, scoring 1-3 without reply, with the points from Bellew and a brace from McEnaney and the goal from Bellew to put the hosts 1-8 to 1-5 ahead at the break. Jackie Agnew replied with a goal for the O’Connells.

The O’Connells got back into the game with a goal from Bernard Osborne and after the teams traded points Dean Stanfield ran through to chip the keeper and put his side five points clear.

Kilkerley battled to get back into the game, but the impressive Robert Quigley secured the win when he brought his tally to the evening to ten points.

It was father against son at the Ecco Road last Saturday night where Cathal O’Hanlon’s Dundalk Gaels came out on top against son Sean’s Clan na Gael in a keenly contested Dundalk derby.

As a result, the visitors maintained their six-point advantage at the top of the table going into phase two, while Clans are still nervously looking over their shoulders as they hover close to the relegation zone.

As expected, it was a closely contested affair in the first half with both side creating chances, with the most important score coming from Thomas O’Connell whose goal sent the Gaels in at the break with a 1-6 to 0-7 lead.

The hosts upped their game at the start of the second half and levelled the match before a Mark McGeown goal had them three in front.

However, the Gaels were determined not to let their unbeaten run come to an end at the hands of their neighbours and a second goal from O’Connell along with scores from Jordan Keating, Dylan McKeown and Jason Clarke saw them make it ten wins for the season.

New St Joseph’s coach Colin Kelly picked up his first win with his new charges against a gutsy St Finbarr's side, who had goalkeeper Andy McCann to thank for remaining in the contest for so long.

The Togher net minder pulled off three great saves in the first half and a massive one in the second as Naomh Fionnbarra dug their heels in to come back and dramatically take the lead.

Joes’ goals from Thomas Smyth and Conor Neary in the first half had the hosts leading 2-6 to 1-4 at half time. Conor Osborne with the opening goal for the visitors.

Two goals in the 39th minute had the Finbarrs ahead. Thomas McCreesh along with Hugh Osborne stunned the hosts. Conall McCaul palmed to the net with less than ten to play.

Defiant McCreesh would make the Dromiskin supporters sweat to the finish with his second goal but the hosts held on to win by two in the finish.

A hectic finish in Philipstown saw St Kevin’s appear to be cruising to victory only to salvage a draw due to Hunterstown Rovers great second half comeback. Both sides were happy to come away with a point in the end.

The hosts led by six at half time with TJ Doheny pulling the strings and Keelan Maher finding the net in a dominant first half display for Thomas McNamee’s men.

Hunterstown importantly kept in touch and gathered momentum so much as to take the lead in the second half on the back of Ryan Burns’ nine points.

Rovers thought they might have won it at the death with a point from substitute Benny Lennon, but the Kevins stalwart Seanie Crosbie levelled it in injury time.