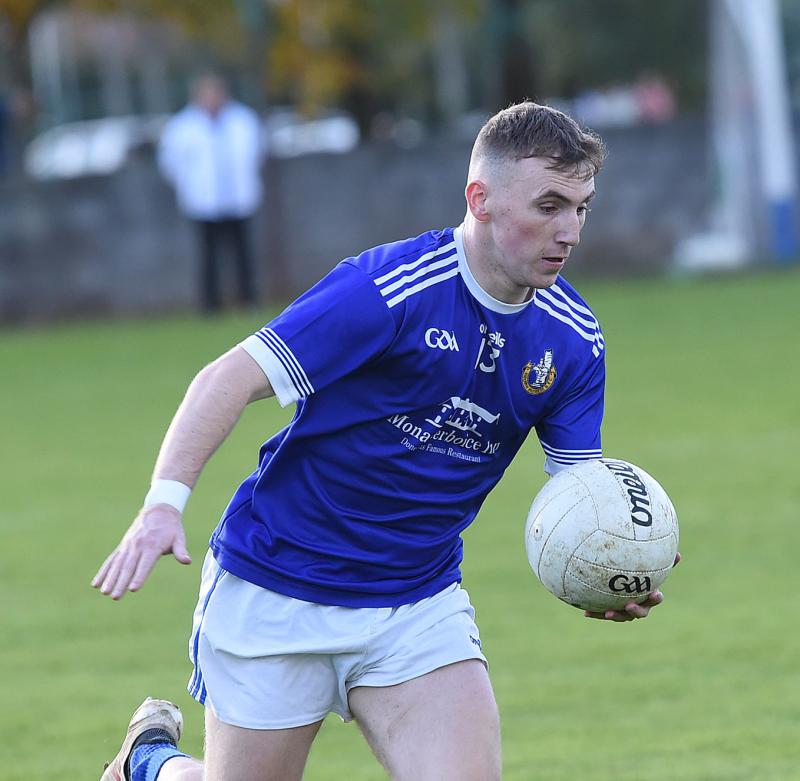 Hollywood Developments Division One Round 11

Naomh Mairtin came from behind at the interval to take both points at Pairc an Chuinnigh on Saturday evening, to secure a place in the top six, where they will joined by St Brides.

Conor Whelan was the star performer for the winners as he kicked seven points after being introduced off the bench on 25 minutes.

St Brides, who finished fifth, fielded a weakened squad but it didn’t show as they were in front after 11 minutes by a point, 0-2 to 0-1.

The Jocks improved their game and scored four unanswered points before Bernard Laverty grabbed his second score of the match on 18 minutes to leave two between the sides.

The Reds had a lucky break when the ball landed at Michael Keane's feet and he slotted home the game's first goal on 21 minutes.  Both sides exchanged minors before the hosts took the lead for the first time when Keane pointed on 23 minutes.

Further scores followed for both sides and the match was level again with half time approaching. However, an added time goal by Sean Marry left the home side well in control at the interval with a 2-6 to 0-9 lead.

After the restart the Monasterboice men moved up a few gears and scored five unanswered points. Sean Marry ended this 'purple patch' with a converted free kick to reduce the deficit to a one-point margin with just over a quarter of an hour to play.

St Brides started to get back into it, but the Jocks finished strongly and ran out comfortable winners.

Both sides went into this affair needing Naomh Mairtin to slip up and the winner would take the Monasterboice’s side's spot in the top half.

St Patrick’s would do their part in the bargain after an excellent opening half display against the men from Termonfeckin, but as it transpired the win would be meaningless come the end of Saturday night with the Mairtin’s taking the final top six spot on offer.

Cathal Grogan shot five first half points and with a strong wind and that fulcrum in attack, the hosts were well on top in the opening half. Despite Niall Devlin showing well once again for the travelling Fechins, they would trail 0-11 to 0-4 at the break.

The second half was all Termonfeckin as they dominated possession, the impressive Joe Corrigan found the range in a desperate effort to gain parity. The hosts only registered one second half score from Joe Connor, the opening half salvo was enough.

It was a disappointing conclusion for a Blues side who suffered their second successive defeat after going unbeaten over the course of their first nine outings.

The Mochtas had the better of the opening half in terms of chances with Smyth prominent once again as they went in at the break with an 0-8 to 1-3 lead. John Kermode scored the opening goal of the game to keep his side in contention.

Smyth continued his exploits in the second period as he found the net to bring his total for the evening to 1-6, while Craig Lennon also raised a green flag for the Louth Village men.

The Blues battled throughout and a goal from Robert Car kept them in with a chance, but it was the Mochtas who held out for the win.

Mattock Rangers finished phase one of the Division 1 campaign on a high with a four-point win over Dreadnots in Clogherhead on Saturday evening.

The Collon men had already ensured their place in the top half prior to throw in, but their sixth win of the campaign proved to be another blow for the Dreadnots who remain in the relegation play-off position.

There wasn’t a lot to choose between the sides in the opening half but it was Mattock who took the initiative when Cathal Fleming scored the only goal of the game from a penalty to help his side lead by 1-4 to 0-4 at the interval.

The home side struggled to find any real rhythm throughout the game and rarely looked likely to mount a comeback in the second half.

With the help of points from Ben Watters and Terry Donegan, the visitors stretched the lead to seven points at one stage. Although Jay Hughes and Craig Shevlin pointed to reduce the gap, it was Mattock who held out comfortably for the win.

Geraldines ended phase one of the Division 1 league campaign on a high thanks to a nine-point victory over Sean O’Mahonys at Haggardstown on Saturday evening.

After recording an impressive win over Newtown Blues in their previous outing, the O’Mahonys were unable to repeat that performance. The Gers took advantage with their fifth win of the season to move further clear of the relegation danger.

Ben Gartlan was the man in form for the hosts as he grabbed two goals and chipped in with three points in a fine individual display, while Michael Rogers also found the net for the winners.

Gartlan’s scores helped the Gers take a commanding 2-7 to 0-4 lead into the break after his side dominated the opening period. The O’Mahonys fought back in the second half and Stephen Kilcoyne raised a green flag but the home side were not to be denied and deservedly came out on top.