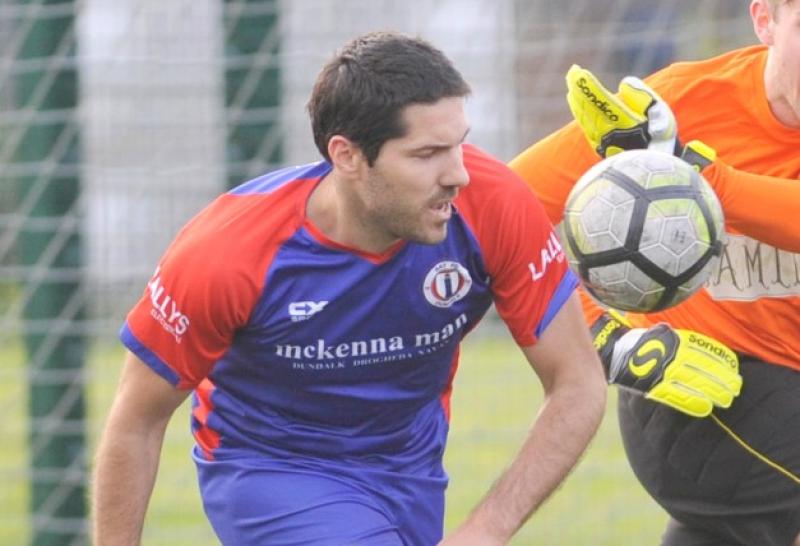 It was a big game for both teams on Thursday night with Bellurgan sitting five points ahead of Bay in the table, but Bay having two games in hand on the Peninsula side in the Dundalk Premier Division.

Bay got off to the perfect start when Alfonso Crespo played Sam Ezenwaka in, the striker drove straight at goal and smashed a shot in at the near post to put Bay 1-0 up afer just two minutes.

Bay were two up before the ten minute mark when Alan Dyas was unlucky to see his shot hit the post, Gavin Donnelly picking up the rebound and slotting it home.

Bellurgan came more into the tie after that and tested keeper Sean Nolan from range, before reducing the deficit with 10 minutes to go to the half. Bay gave up possession in the middle of the park and Emmet Rogan fired an effort from 20 yards into the net.

Bay however restored their two goal lead when Donnelly played Dyas in, the striker neatly rounded a defender before firing home. The home side had the chance to kill the game in first half injury time when Ezenwaka was hauled down in the box but the striker fired his penalty off the inside off the post.

With just five minutes gone in the second half Bellurgan were given an opportunity to get back into the tie when they were awarded a penalty. Tadgh O'Connor stepped up, but blazed his penalty over the bar, much to the relief of Bay.

Bellurgan held the lions share of possession but the stop start nature of the half prevented them getting any real momentum going, with Bay's defence being more than resolute to prevent Bellurgan's comeback.

In the dying moments Conor Maguire broke through and lashed a strike against the post, the ref then bringing an end to proceedings with Bay FC picking up a valuable three points.