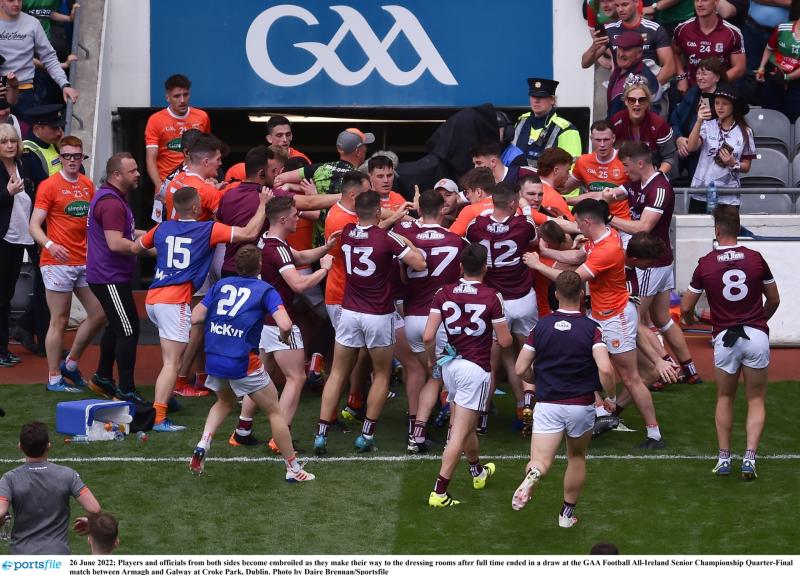 Never before has there been an All-Ireland quarter-final like the one that opened Sunday’s two-match programme at Croke Park, Galway up against Armagh. It was the first ever to have extra-time and a penalty shoot-out. And a result that couldn’t have pleased any neutral in the 71,000-plus crowd.

There was more. The row that took place at the tunnel as the teams made their way off at the end of the 70 minutes had more handbags than hard hits, but there was one particularly nasty incident in which Galway full-forward, Damien Comer, was eye-gouged. Anyone who missed it on television had only to glimpse the following day’s papers. There it was in all its gory detail.

What a pity such an epic encounter that began at 1.45 and was still going on over two hours later should have been blighted in this way.

Galway got the decision, beating Armagh simply because they were better able to convert penalties. But had it not been for the GAA’s decision to compress the championship season, there would have been no extra-time, no penalties, and instead a replay that would be anticipated like no other.

This was the third of four quarter-finals held over the weekend. The others went according to form, but although the big two, Dublin and Kerry, got the expected wins, neither was overly impressive.

Derry, on the other hand, couldn’t have done it better in their rout of Clare, and this, plus a semi-final meeting with Galway, will have many Oak Leafers thinking of having two more trips to Croker before the competition is over.

Armagh will have many regrets, and all won’t centre on two of their spot-kickers’ failure to convert in a tension-filled closing passage. They appeared to be dead and buried when going seven points down with the game well into time added on. Giving up, however, is not part of their make-up.

Though down to 14 with the dismissal of Greg McCabe, Kieran McGeeney’s men plucked a goal from nowhere and then another. There was more. With time added on being played and massive support behind them – anything up to 50 percent on the crowd was in orange – Rian O’Neill came up with an equaliser for the ages, his pointed free kicked from beyond the 45-metre line.

Armagh could have defended better after a third goal put them two points up in the second half of extra-time, but didn’t. That will surely figure prominently in any post-mortem. Almost immediately Galway claimed a goal at the other end.

The sides were on terms when Armagh went on the attack in the very last passage of play, and when in possession well inside the Galway half, had a real chance of victory. It was spurned, however. Niall Rowland’s shot went to the wrong side of the post.

In a phase that was foreign to Gaelic games up until this year, one of Armagh’s shots went wildly over the bar, while another hit the post. Galway were dead-on with each of theirs and so made it through to the last four in the most dramatic fashion.

As many would see it, justice wasn’t done. But for a change in the rules, Armagh would be getting another chance, no more than they deserved.

Nothing to compare in the game that followed. Probably too much to expect. Still, Kerry and Mayo could have done much better, though in their defence, a heavy shower made it difficult for players to hold their feet, contributing to many mistakes.  It was even enough in the opening half, but without ever living to their pre-match billing, Kerry pulled away for an easy win.

Much the same can be said of Dublin in their defeat of Cork. A win was always on the cards for the raging hot favourites, even when Cork were matching strides with them in the opening half; but it still wasn’t a win to set metropolitan pulses racing. The absence of playmaker, oftentimes scorer, James McCarthy was felt.

And what of Derry, huge winners over Clare? This was another confident step in the parade marshalled by Rory Gallagher, and, as said, there could be more than just one further game to come.

They put a marker down early on, and game as Clare were, they simply couldn’t match the Ulster champions in any facet of the game. There’s another huge weekend to come.