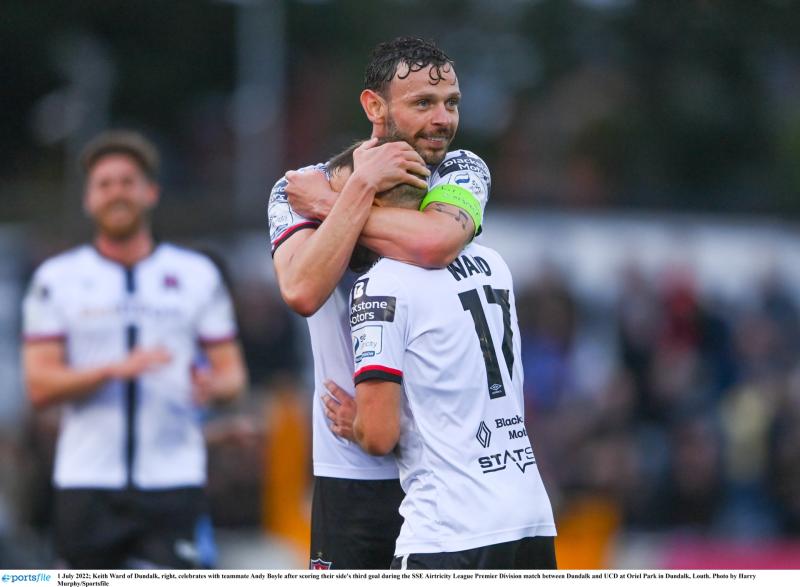 Dundalk FC continued their amazing home form with an easy 3-0 win over UCD tonight, keeping pressure on Shamrock Rovers at the top of the SSE Airtricity League table.

A forgettable first half was followed by a Lilywhite rampage in the second, with David McMillan and Keith Ward getting on scoresheet in between a Mark Dignam own-goal.

Dundalk made one enforced change from their scoreless draw away to Shelbourne last week as Steven Bradley, listed on the original teamsheet, was replaced by Joe Adams.

Also named in the starting line-up for The Lilywhites was defender Mark Connolly, whose loan arrangement from Dundee United had reportedly concluded a day earlier.

UCD made two alterations from their narrow 1-0 home defeat to Derry City, with Adam Verdon and Thomas Lonergan both named in the XI for Andy Myler’s struggling side.

The dismal weather conditions were in line with the fare being served up out on the pitch throughout a poor first half, which was as uneventful as any witnessed at Oriel this year.

As one might expect, Dundalk were dominating possession, but it took them 36 minutes to fashion the game’s first chance, when ex-UCD man Paul Doyle unleashed a shot from outside the box which had to be superbly palmed over the crossbar by Kian Moore.

Another former UCD alumnus, Greg Sloggett, forced Moore into another good save three minutes later, with Michael Gallagher clearing any potential danger from the rebound.

It was a game that badly needed a goal, and that’s exactly what happened six minutes into the second half when after some good work by Daniel Kelly out on the right, David McMillan turned and finished inside the box to score his first goal in almost a full year.

Dundalk made it 2-0 on 57 minutes when Robbie Benson’s corner from the right was headed onto the bar by Connolly, but pressure from Sloggett caused Dignam to score an own-goal, although Adams may have gotten the final touch before it crossed the line.

The Lilywhites sealed the points three minutes into stoppage-time when John Martin did well on the right before pulling it back for Ward, who produced a neat side-footed finish.