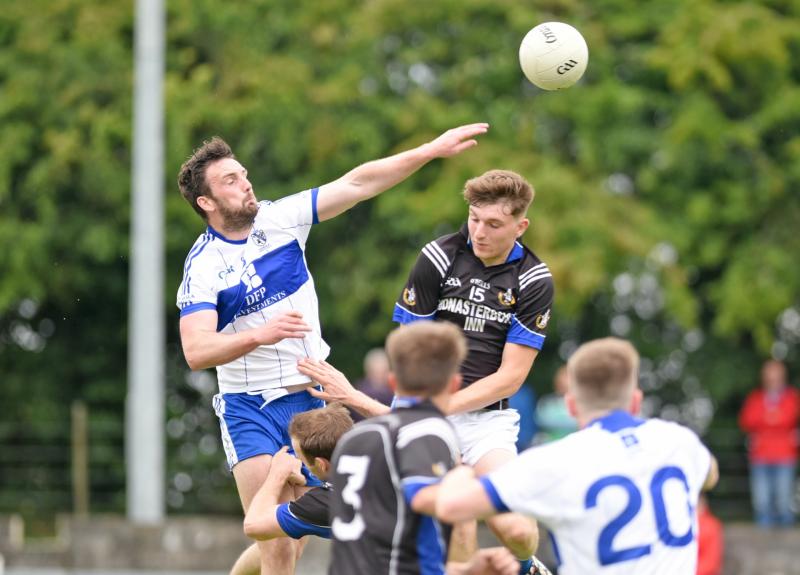 Derek Crilly climbing for a high ball during his time with Dundalk Gaels. In 2022 he transferred to Stabannon Parnells and grabbed 1-6 in their most recent victory

St Nicholas got back to winning ways in Dundalk last Saturday evening as they claimed a five point win.

In a tight first half it was the home team who struck first from a free. A Phillip Kirwan free brought the Nicks all square. Both teams went point for point for the half; two from Paudi Downey, one each from Kirwan and Fionn Meagher were the Nicks scorers.

A late Dowdallshill goal chance was put onto the crossbar and over the bar by Shane Finnegan in the St Nicholas’ goal, leaving it all square going in at the break, five points each.

The point for point scoring continued into the second half with a Brian Carter fisted effort and an Aaron Flanagan point for the visitors.

Paul Gill and Cathal Sheridan kept the Hill in touch but midway through the half the Nicks began to extend their lead through Downey, Kirwan and Sam Reilly points.

Dowdallshill kept chipping into the Nicks lead and kept it within three until the final ten minutes where St Nicholas extended their lead to five and saw out the final minutes to leave with the two league points.

Sean McDermotts picked up their first win of the season in Mountrush against Cuchulainn Gaels. The win was worth the wait as McDermott’s turned on the style in an excellent performance.

Lorcan Myles found the net twice over the hour and Marty Duffy shot 1-9 at the edge of the square with corner man BJ Matthews slotting away the rampant Seans’ other goal.

At the other end, Lorcan Ludden was immense at the back as the visitors didn’t score in the second half with the hosts leading 2-6 to 0-6 at half time.

Mícheál McCabe top scored with five in that period but there would be no denying the Churchtown men's maiden victory.

Wolfe Tones had to come from behind at home in Páirc Bhoilfe Toin to edge out John Mitchels in Division 3B. The game was effectively a four pointer with the visitors looking to go joint level with the Drogheda men on the table.

Darren Weldon’s consistency again was the main reason for the hosts’ win. The forward kept his side in the game in the first half with their entire tally. Weldon swept the goal into the net after the Mitchels keeper had made an excellent stop from Niall Smith.

Mitchels were dominant and deservedly led by two at the break 0-8 to 1-3 thanks to Carl Courtney and John Gallagher, but six points in a row from Tones after the break swung the game.

Points from Chris Cudden, Trevor Walsh and the improving Eoghan Brennan pushed the Tones over the line despite two late points from Gallagher.

Despite being without a number of regulars, Stabannon Parnells proved too strong for Annaghminnon Rovers on Saturday night.

Goals from Derek Crilly and Bobby Butterly helped the visitors in Stonetown to maintain their three point lead at the top of the table.

The opening half proved to be a closely contested affair as Annaghminnon turned in another good display. However, just before the break Butterly forced home the opening goal of the game to give his side a 1-6 to 0-4 advantage at the break.

The game was effectively settled just minutes after the restart when Crilly added a second goal and despite a battling display from Annaghminnon, the visitors went on to win by nine.