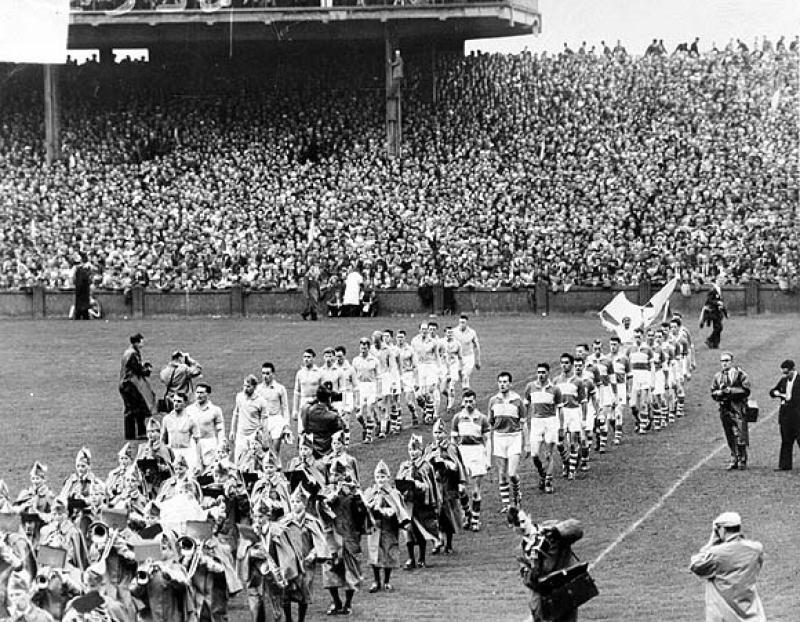 Dublin and Derry line up for the parade prior to the 1958 All Ireland Football Final. Should they both win at the weekend, this pairing could meet again in the final in 2022

If Kerry and Derry come through this weekend’s semi-finals, the pairing for this year’s All-Ireland football showpiece on the last Sunday in this month will be something entirely new. All others have been seen before, Kerry and Galway meeting most often.

There have been seven meetings of these rivals, the most recent in 2000. This tie went to a replay, victory for Kerry making the score 4-3 in their favour.

They met twice in the mid-‘60s when Galway were in their pomp. The great three-in-a-row side had Enda Colleran twice accepting the Sam Maguire, John Donnellan doing the honours on the other occasion. 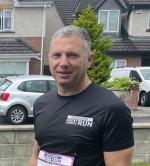 In support of the Irish Motor Neurone Disease Association

There have been six meetings of Dublin and Galway, the most recent in 1983. This is the one that’s most readily recalled, but not for all the right reasons. Dublin took the field with fifteen players, but finished with just a dozen.

Brian Mullins, Ciaran Duff and Ray Hazley were sent off by Antrim referee, John Gough, who also dispatched Galway’s Tomas Tierney. There was as fight in the tunnel that day as well, but despite finishing shorthanded, Dublin still managed to win, giving them a 5-1 advantage over their western rivals.

There’s been just one Dublin/Derry clash. That was in 1958, the year Louth handed back Sam. This county’s bid for two-in-a-row came unstuck in the Leinster final. A game played in Navan – because the Hogan Stand was under construction – went Dublin’s way, 1-11 to 1-6.

The semi-finalists that year? Dublin, Kerry, Galway and Derry. Dublin were paired with Galway, and having been led for most of the game, squeezed home with just one point to spare.

Derry, who were celebrating a first-ever Ulster Championship win having previously made it to just three finals, were rank outsiders for their tie with Kerry.

But the Oak Leafers had a real ace in Jim McKeever. Northern consensus was, this most elegant of midfielders would be more than a match for Mick O’Connell. He was, and more. McKeever was the main driving force as Derry came from behind to win by a point, 2-6 to 2-5. A young Sean O’Connell finished top scorer.

McKeever was again in his element in the final, himself and Phil Stuart eclipsing the best efforts of John Timmons and Sean Murray. Dublin moved Lar Foley from right-full to try to offset the Derry dominance in this most vital of areas, and it worked. Yet, Dublin still needed a fortuitous Paddy Farnon goal to turn the game in their favour. It ended 2-12 to 1-9.

Just how dominant McKeever was that year, in Ulster as well at All-Ireland level, is reflected in him being named the country’s best footballer, the first to receive the Texaco award. Had there been All-Star awards then, he’d have been a shoo-in for either 8 or 9. No-one better has emerged from Derry since.

So, here we are coming up to the weekend for the 2022 renewal of the All-Ireland semi-finals. The game that’s played nowadays is much different than the one of McKeever’s day; but whatever about its faults – and in your writer’s view there are several – the level of fitness required today couldn’t be achieved by only doing laps, sprints, exercises, and, what was added to the training sessions of yore for a bit of fun, leap-frogs.

Gyms were foreign to players back then, and if players sat down to a big fry on the morning of a game, there was no-one to say they shouldn’t. It could be that pasta had still to make its way into this country, never mind finding a place on a footballer’s plate as part of a special diet.

But there was collective training – until it was banned in the 1950s. This had teams preparing for All-Ireland semi-finals and finals living as a group for maybe a fortnight before the match.

Omeath’s St Michael’s College was Louth’s base on the lead up to the 1950 All-Ireland final, and part of the daily routine was a walk from this village to another of the Cooley Peninsula’s, Carlingford. Twice-daily training sessions were also part of the routine.

Galway and Derry are meeting for the first time at this stage since 2001 having also locked horns in the semi-final in 1998 and both, no doubt, will be fancying their chances.

Same with Dublin and Kerry – fancying their chances, that is. Derry sauntered through their quarter-final – Galway finished their’s leg-weary.

Dublin and Kerry had similar outings, neither of them overly impressive. They have more to offer, of course, and that will be evidenced in this latest set-to. Dublin to win, setting up a meeting with Derry, thus reviving memories of 1958.