Gerry Malone's thoughts on the Bohs game, current LOI facilities and his recent trip to Warrenpoint 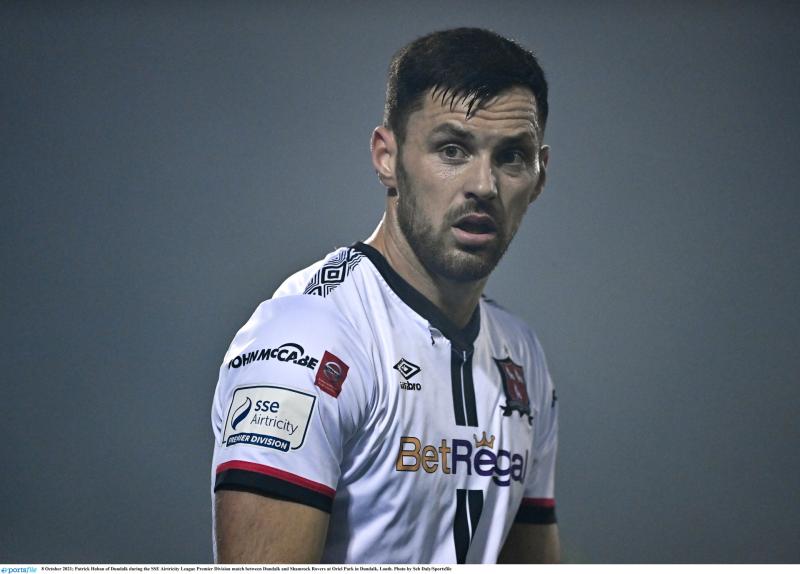 Dundalk's Pat Hoban, whose fitness is yet to be determined at the time of writing following an injury picked up in the draw with Bohemians. (Pic: Seb Daly/Sportsfile)

A late Georgie Kelly penalty for Bohemians against Dundalk at Dalymount snatched a precious two points away from the Oriel Park men and resulted in Vinny Perth’s side being dragged back closer to the dreaded playoff spot again last Friday night.

They dropped from sixth to seventh in the league. They are now only three points clear of Waterford who are in the playoff zone at present but who have a game in hand on Dundalk. Finn Harps come next in the eighth spot just two points behind Dundalk but who also have a game in hand.

Dundalk is now sitting in the seventh position on the table. Drogheda’s win over Longford puts them back into sixth place, a point clear of the Lilywhites but with a game in hand on their arch-rivals. Should Drogheda win that game in hand they will be safe.

During the post-match interviews, Vinny Perth was asked about the result being a setback on their hopes to get into Europe. I was surprised to hear the question because as far as I am concerned, Dundalk’s route to Europe is through winning the cup.

Their playoff worries would have been eased had they got all three points. But a point apiece was the fairest result, although Dundalk was the better team.

They went ahead on 29 minutes. Pat Hoban and Bohs keeper James Talbot collided accidentally in the box following a poor Tyrek Wilson header as a pass to his keeper. Sami Ben Amar latched on to the loose ball and fired to the net. Minutes later Pat Hoban was off through injury.

When I asked Vinny Perth how Pat was, he said he would not know until during the week. Vinny said to let people speculate as they generally do about injuries.

For Dundalk, Vinny said it was just an injury. Perth did say Hoban got a dead leg in the same area where he collided with the Bohs keeper that led to the goal. Any doubt over Pat Hoban’s fitness would be a major worry for Dundalk going into this week’s cup semi-final with Pat’s in Inchicore.

Hopefully, he is ok but I would think Vinny Perth was taking no chances with just a few days to the big cup game.

Bohemians levelled the game a minute into injury time when Daniel Cleary was judged to have fouled Bohs defender Ali Coote. It looked more like an accidental collision. Amazingly referee Damian McGrath gave Dundalk a free out.

As the Bohs fans roared in disbelief McGrath spoke to his linesman and then turned and pointed to the spot. The decision did not really surprise me. Up stepped Georgie Kelly to convert a penalty that Peter Cherrie nearly got to and maybe should have.

But Cherrie was a hero on the night yet again making off a series of top-class saves as Bohs pressed for the equalizer. It was great to see both David McMillan and Daniel Kelly get a run in the Dundalk team and it certainly will do no harm given next week’s cup semi-final.

Darragh Leahy starred at the back while Will Patching was also outstanding. Andy Boyle was magnificent yet again, getting back at one stage to clear the ball off the line.

Greg Sloggett had a great night at Dalymount. Sloggett, usually a midfielder, had to play full back as Cameron Dummigan and Ravis Jurkovskis were both suspended.

Referee Damian McGrath had a poor night at the office with his decision making leaving a lot to be desired for both teams.

I was amazed that Dundalk fans continued to let off smoke bombs at Dalymount on Friday night.
The bombs were let off periodically in the first half, spouting dark, toxic, smoke that floated across the pitch. It was not as bad as the previous week in Oriel but that is no excuse.

In the second half, there was nothing at all thankfully. Dundalk has still failed to warn its supporters to desist from the practice. They must do so immediately.

Dundalk will travel to Inchicore to take on St Pat’s in a cup semi-final that should be televised just as much the Bohemians and Waterford game is set to be.

Usually, the games are shown live separately on TV. Last year one semi-final was shown on a Friday night. Dundalk’s semi-final against Athlone went out on that Sunday night.

Cup semi-finals used to be played at neutral venues. I strongly believe the games should be played at Tallaght Stadium on different days.

The ticket allocation should be split equally between both clubs at this weekend’s game despite St Pat’s being at home. Instead, the vast majority will go to St Pat’s with Dundalk getting the minimal amount.

This is a disgrace as it’s a semi-final, with the revenue from ticket sales set to be split equally between both clubs at the game with the FAI taking a percentage of the sales.

Yet although both teams at Inchicore on Friday night are playing a semi-final, Dundalk fans are not getting equal ticket distribution. This should be the case. The Dundalk team will be lucky to see more than 250 of their supporters in Inchicore on Friday.

This is just not fair. If the FAI refuse to return to neutral venues, then there should be two legs.
Dundalk beat St Pats in a two-legged semi-final in 1988.

Barry Kehoe put in one of his best performances for Dundalk in the 2nd leg when Turlough O’Connor’s side put in a blistering performance.

I have brought up the toilet facilities at League of Ireland grounds during the lockdown early in 2020.
I have highlighted Oriel Park and how much better the toilets could be. I mentioned work would be needed to be done on them to make them Covid safe as far as possible.

A lot more should be done but at least they put in portaloos for away supporters when they had nothing previously. There is soap in the stand toilets but no hot water. Overall the facilities are still not satisfactory, but they are better than they were.

I would hope that the women’s toilets would be in pristine condition. But I have no idea. Ladies in that horrible away end used to have to go into the stand and use the toilets there as there was no outside ladies’ loos. Now at least there are portaloos.

While Oriel’s facilities have improved they are still not good enough. If you think Dundalk’s facilities are bad, visit United Park in Drogheda, Dalymount Park in Dublin and Finn Park In Ballybofey and the facilities at Inchicore. Compare Oriel to these and it’s like walking into the Ritz.

Shamrock Rovers facilities are excellent along with Galway, Sligo Rovers and Athlone. Only Tallaght have the proper facilities for this pandemic I reckon. It’s just not good enough. Unless clubs are going to be provided with a deadline to improve facilities, then their grounds should be shut.

League of Ireland toilets pose a serious health threat especially with infections very high once more. Most clubs have done nothing about these facilities for their supporters since the pandemic began. It is incumbent on the public health authorities to act on this as soon as possible.

I visited Milltown on Saturday, the home of Warrenpoint FC. They were playing Linfield. Chris Shields was immense for the Irish League champions. He scored a penalty early on, while minutes later created a second goal.

Linfield got a third goal not long before the break. They took their foot completely off the pedal in the second half. It was such a relaxing second half that Linfield did not have a shot on goal. Warrenpoint were exceptionally poor and the club look set for relegation.

I spoke to quite a number of Linfield supporters at the game. They said they could not believe why Dundalk did not wait until November to release Chris Shields when his contract was up. They said that he was obviously Dundalk’s talisman. I said he was.

I’ve said it here before, after reflection Shields should have been kept as he was so badly needed to help Dundalk avoid the drop to the playoffs. John Gill was also at Saturday’s game. The former Dundalk boss is a first-team coach along with manager Barry Grey.

Sadly the Point has won only one game this season and look destined for the drop. Former Dundalk keeper Arron McCarey, now with Glentoran, was sent off in an Irish League game on Saturday after getting involved in an incident.

The Republic of Ireland had a good 4-0 win over Qatar at the Aviva last week. I was delighted for Stephen Kenny. He is giving players a chance at an international level that that other managers would not do.

Former Dundalk player Jamie McGrath was excellent while Daryl Horgan also played his part. Ireland played in blue as it marked the centenary of a 26-county soccer authority being set up and breaking away from the Irish League.

The new 26 county league was run by the FAI. The first colours the 26-county team played in was blue. But to me, that was nothing to commemorate as it was the partitioning of Irish soccer. It should never have happened.

Dundalk is set to play their seventh cup semi-final in a row this coming Friday night. It would be a club record to get to the final seven years in a row. With a bit of luck, they will. If the game ends in a draw the replay is at Oriel next Monday. Have a safe week and please be careful out there. 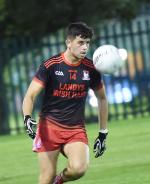