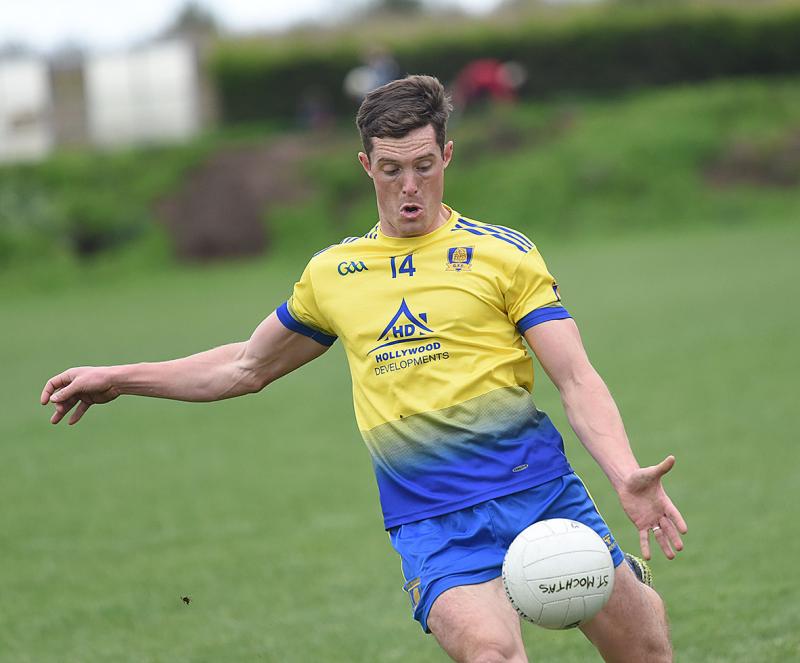 There were dubious scenes in Haggardstown on Sunday afternoon as for the first time in their 92 year history, St Mochtas did just enough to see off the challenge of Ardee St Marys and book their place in the Senior decider.

Once more Sean Kelly’s Ardee men found themselves behind, a brace of goals from Philly Englishby and Craig Lennon helping the Louth village men into a five-point lead at the final water break.

Just as they have done throughout this championship, Ardee dug deep to put themselves in pole position to at the very least force extra time when clawing the deficit back to within a point going into injury time. But the final score went the way of Declan Byrne sealing a memorable win.

The men in Yellow came out all guns blazing in the opening few minutes, but their enthusiasm was not matched by scores on the board. An effort going wide, another dropped short and one hit way too low in a nervy start for the Mochtas attack.

Despite notching the game’s first wide, in comparison Ardee looked clinical every time they got within scoring range, some superb shooting from Johnathan Commins seeing them take an early two point lead.

The tactics of both sides was soon becoming clear. The Mochtas were looking to move the ball fast and since they kept most of their bodies in defence they hoped to utilise the fielding prowess of Ciaran Byrne who was deployed for much of the first 20 minutes as their lone attacker.

The Mary’s too favoured a kicking game, doing their upmost to get Commins on as much ball as possible, knowing he could take his man on and tee up another or happily slot over score after score himself.

They needed to be patient with their approach play, as the Mochtas were well drilled defensively, many of their forwards tracking back to make Ardee’s approach to goal as tough as possible.

The Mochtas banked on getting forward quickly when creating turnovers, but time and time again, despite the prowess of Ciaran Byrne in the air, he was left isolated as support just didn’t arrive quick enough. This is something they soon rectified to be in the lead marginally at half time.

At the water break they trailed by 0-3 to 0-2 as two points from Ciaran Byrne negated somewhat a score from Tom Jackson, but the tide soon changed when Declan Byrne was kept back more to support his teammate.

They hit three of the next four scores in a mini purple patch as scores from Declan Byrne and Danny Kindlon left them up by 0-5 to 0-4 at the break. All to play for at this stage.

Philly Englishby had been given the freedom to roam freely up and down the pitch in the first half, but in this role he felt anonymous and lacked any impact. Yet once deployed more up the pitch he became a lynchpin to anything good about the Mochtas attack.

After notching a point apiece, this was soon followed by the opening goal of the game. Declan Byrne and Englishby managed to cut open the Mary’s defence with a quick one-two before Englishby rattled the net with a superb strike on 34 minutes to put his side four ahead.

However from here the scoring dried up for them, one missed opportunity from Gerry Garland their only shot on goal for the next nine minutes. With the help of substitutes Carl Gillespie and Ronan Carroll Ardee managed to draw the game back level.

But with a chance at making a first ever final so close, The Louth Village side fought back strong with 1-1 in quick succession to regain their foothold on the contest.

After winning every single one of their own kickouts up to this point, The Marys finally lost one on 44 minutes and this led to a succession of four in a row turned over by a highly charged Mochtas attack.

One such interception led to the decisive second goal, Englishby rising highest to regain possession around the middle. This led to some good link up play from Ciaran Byrne and Jamie Farrell that teed up Craig Lennon for a vital second goal that put them five ahead going into the final quarter.

They could have been home hosed only for a series of missed opportunities from placed balls, thus keeping the doors open for an Ardee comeback.

Following the final water break they regained control of their kickouts, allowing them to venture forward more and this led to four in a row from Tom Jackson, Carl Gillespie (2) and Carroll as they managed to get within a point of their opponents as the tie entered injury time.

But it was the Mochtas who eked out the final score, Declan Byrne holding his nerve to open up a two point lead that was never pegged back. An historic first final awaits them now, either against the Newtown Blues or reigning champions Naomh Mairtin in a couple weeks’ time.