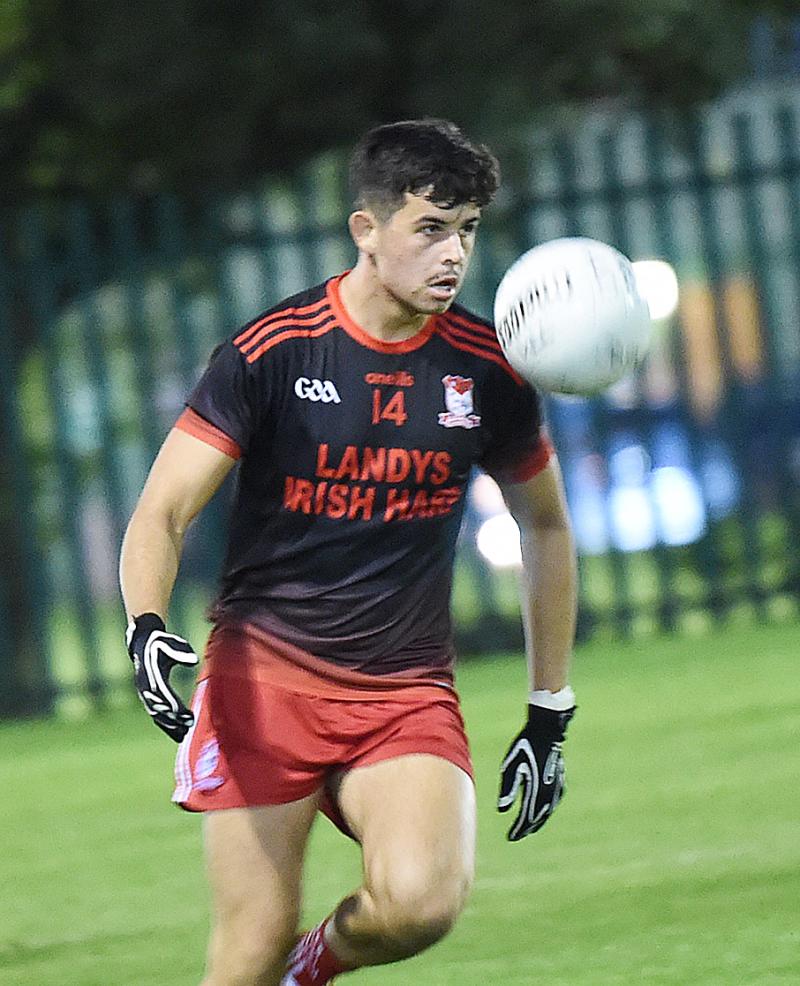 This thrilling Junior Championship semi-final boiled right down to a winning John Gallagher free kick along the sidelines for his side, as John Mitchels advanced to the final at Na Piarsaigh’s expense.

Having just levelled the game with a free from his hands, it cannot be understated the level of difficulty on Gallagher’s sweetly struck kick on the left-hand touchline.

He decided to kick the winner off the ground and it had to have accuracy and distance, but he judged both to perfection to see the Ballybailie men into their first Junior final since winning the Christy Bellew Cup in 1998.

Shellshocked Na Piarsaigh looked to have done enough when substitute David Boyle came off the bench to give them a slender lead minutes earlier with an excellent point. In what looked to be the winner, it would have been redemption for last year’s penalty shoot-out heartache.

The night was awash with superb scores right the way through. John Bingham countered up the field for Mitchels to bury past Adam Molloy in the Na Piarsaigh goal for the first score of the game after a nervy opening fraught with overcooked balls from both sides.

With Mitchels defensive style, they were happy to defend but John Garvey’s troops were well versed on keeping the width and as a result quickly drew level thanks to Robbie Murphy, Mark Larkin and the first of two gorgeous first half efforts from Paul Mallon.

Mitchels efficiency was needed when they forayed up the field. Gareth Kane then chose to defy physics with a shot from the right corner that went over the bar. Gallagher, quiet up that point entered the game with a chip lift and wonderful strike to find the back of the net to make it 2-1 to 0-3.

In the opposite corner of the field another promising youngster Mícheál Begley also introduced himself to the game with his first. He was excellent throughout, the Louth U20 star added two more points in the first half but was a constant menace all night for the Mitchels.

Mitchel’s have been steadily improving in recent seasons and their game plan revolves around hard work. Kane and Gallagher were up top and that duo are well able to carry that mantle.

They both added to their tally before Begley (free) and Ciaran Murphy made it a one point game at half time, 2-5 to 0-10 in the Mitchels favour.

Na Piarsaigh was dominant in the third quarter and looked to have done enough to have turned a corner in that period. The Rock Road men landed another three unanswered points with Begley again to the fore.

However, Mitchels final tilt was well timed as Kane again stepped up to the mark to level the game and sidekick Gallagher which gave them the lead.

But Mitchels ability to stifle and soak up the pressure made Na Piarsaigh more conservative, especially when Boyle gave them the lead after Vincent Chorley clipped over his second point of the night.

And so it would be left down to Gallagher’s ice cool heroics to lead the John Mitchels to the Junior summit. A chance to bridge that 23-year gap when they face Glen Emmets in the decider this Saturday in Dunleer (Throw in 4PM).