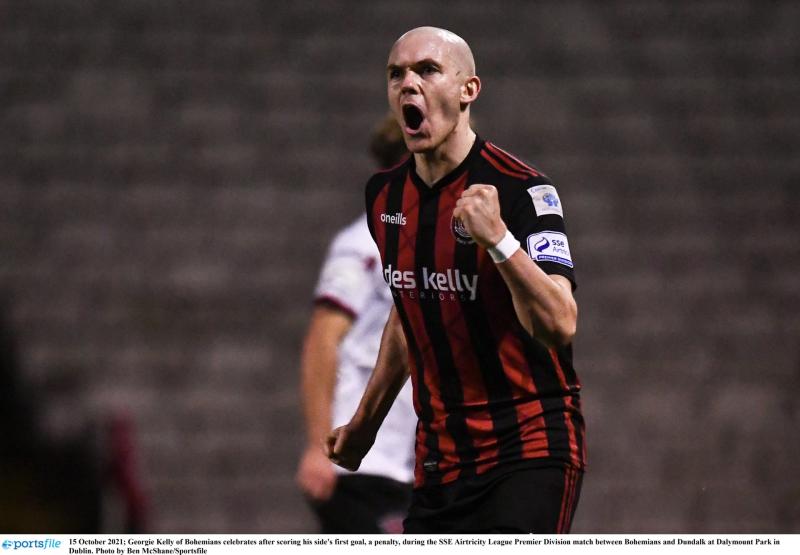 Bohemians Georgie Kelly reacts after his late penalty clinches a draw for his side. (Pic: Ben McShane/Sportsfile)

Dundalk had some chances early on, with Michael Duffy’s effort going straight down the throat of James Talbot, before in-form Sean Murray drilled a shot well wide of the mark.

At the other end, Bohs were beginning to assert some authority, and Andy Lyons saw his attempt deflect off Dundalk captain Andy Boyle and out for a corner, which was headed over by the league’s top marksman, Georgie Kelly, who was left unmarked in the box.

However, it was the visiting side that hit the front on 28 minutes when Liam Burt’s header back to Talbot saw the Bohs goalkeeper collide with Patrick Hoban, with the ball falling kindly to Ben Amar, who then scored what was his first league goal for the club.

Bohs sought an equaliser, and Tyreke Wilson’s free-kick was gathered by Peter Cherrie on 34 minutes, before the full-back fired over from distance on the stroke of half-time.

The Gypsies continued to press after the break, but Ross Tierney sliced his shot miles wide of the target; not long before Wilson dragged another shot wide of the mark.

Playing at right-full for Dundalk was Greg Sloggett, and he volleyed into the arms of Talbot from close range, while Murray lifted an effort over the Bohs keeper soon after.

Dundalk haven’t been beaten since Cherrie was reinstated between the sticks and the veteran Scotsman pulled off a remarkable save to deny Promise Omochere.

The Lilywhites should have doubled their lead when Will Patching’s shot stung the hands of Talbot, with the returning David McMillan blazing over from the resulting rebound.

But, Bohs were awarded a penalty in stoppage-time after Daniel Cleary committed a foul on Ali Coote and Georgie Kelly made no mistake despite the best efforts of Cherrie.