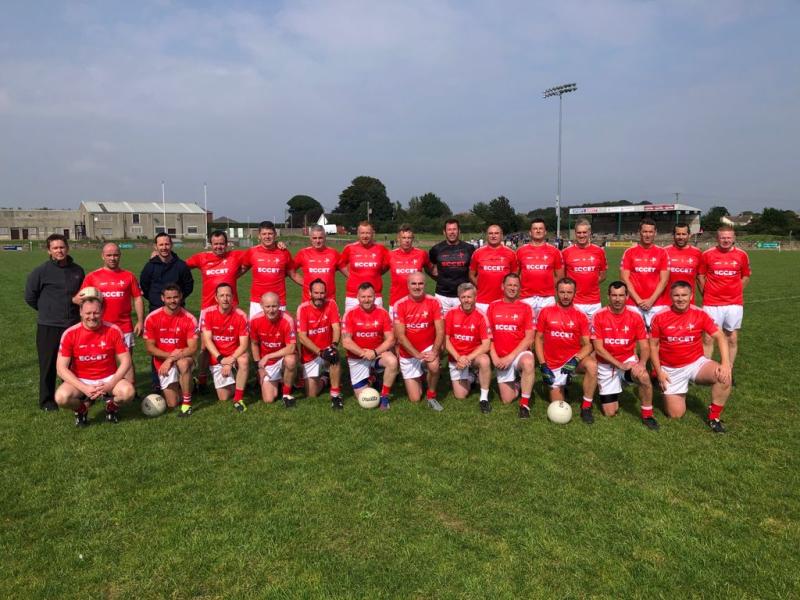 The Louth team before their encounter with Cavan in Haggardstown

Louth Gaelic Masters will play Tyrone in the Dr. Loftus Cup this Saturday 16th October for a place in the All Ireland Final. This year marks Louth’s first season back in the Gaelic Masters Competition, an inter county competition for players aged 40 and over.

It is highly competitive and well respected with 16 counties taking part. This year’s format in a change from previous years consisted of four groups of four counties playing each other on a round robin basis with your final placing determining the knockout competition you ended up in.

Louth finished top of their group which resulted in them entering the Cup semi finals along with Dublin, Mayo and Tyrone. The Louth squad is made up of approximately 30 players representing 16 clubs from within the Wee County.

The semi final is fixed for St. Tiernachs Park, Clones (throw in 3PM) and is set to be one of their toughest battles to date with their opponents boasting ex county stars such Stephen O’Neill and Ryan McMenamin among their panel.

The boys in red began their championship at home to Cavan in a grueling affair in McGeough Park, Haggardstown where the home side had to dig deep to bring the game to extra time. Backed by a strong wind the Breffni men led by 1-7 to 0-6 but louth bounced back to record 2-11 apiece draw come the final whistle.

The tie could not be decided following two five minute periods of extra time, resulting in the game going back to the old soccer rule of golden goal, the next score be it a goal or a point sealing the victory. Up stepped the Newtown Blues Robert Carr who showed nerves of steal to fire over a free to bag a 2-16 to 2-15 win.

Their second tie was away to Longford/Leitrim, where they narrowly went down by three points. Their earlier victory over Cavan was however enough to see them finish above both sides and Westmeath who they did not end up playing in the group stages and thus become the shock fourth team into the Cup Semi-Finals.