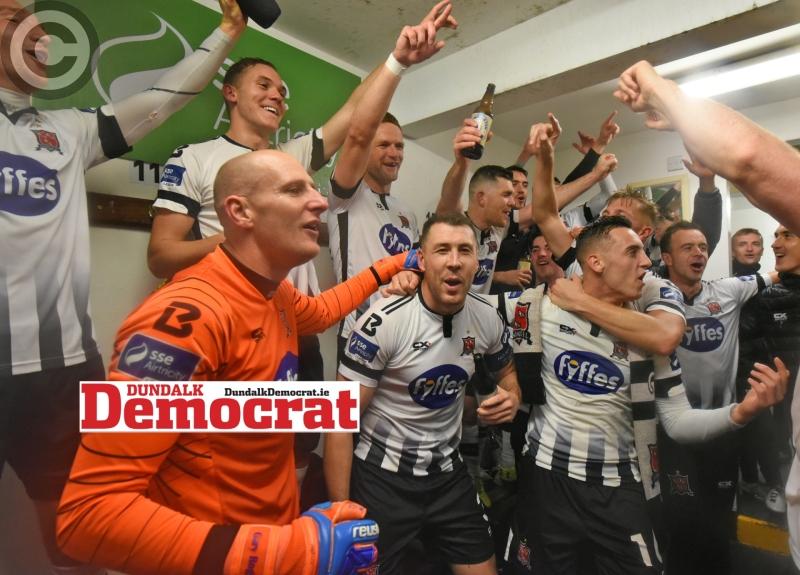 Dundalk FC manager Stephen Kenny has hailed his players as being amongst the league’s “greatest” after securing the club’s 13th League of Ireland Premier Division title on Friday night.

Patrick Hoban scored a late equaliser against St. Patrick’s Athletic at Oriel Park to ensure the Lilywhites earned the point required to seal a fourth crown in five seasons.

And the success was made yet sweeter shortly after full-time when star winger Michael Duffy signed a new two-year deal  to end months of speculation over his future.

The Foylesider joined ‘keeper Gary Rogers in committing himself,  the Meath man having penned a one-year extension on Thursday.

“These players are amongst the greatest players ever to play in the league and they proved that by getting to the Europa League and winning matches at that level,” he said.

“We’re not saying that we’re better than anyone else, but we’re amongst the great teams.”
Kenny’s time at Dundalk has produced two Irish senior internationals in Daryl Horgan and Seán Maguire, while 2015 double winner Richie Towell could be set to add his name to that list following the Rotherham midfielder’s inclusion in the squad for the upcoming Nations League fixtures.

Indeed, it has brought Kenny some considerable satisfaction and he believes there are future national team players in his current panel.

“I remember being in Abbotstown three or four years ago doing a colleges’ thing and saying that I thought several players would be capped.

“It seemed like a very far-fetched statement then, but Richie, if he goes on, will be the third out of that team and we’ve a few in there easily good enough.”