Dundalk FC are champions of Ireland! 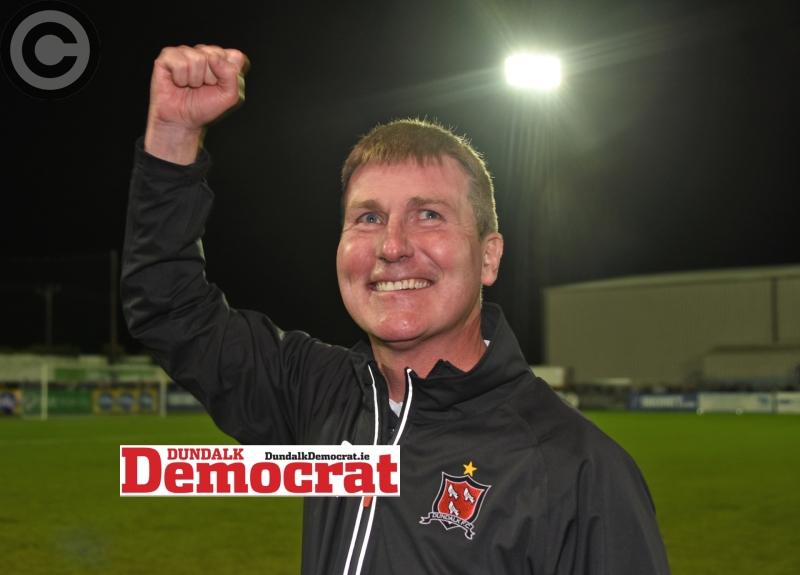 Stephen Kenny closed to within one major trophy of Jim McLaughlin’s record at Oriel Park on Friday night as Dundalk FC secured a 13th League of Ireland Premier Division crown.

Under the lights, the Lilywhites were far from their best against St. Patrick’s Athletic, but Patrick Hoban’s stoppage time leveller ultimately gained the point they needed to make sure of a fourth league victory in five seasons - a return which draws Kenny level with Pat Fenlon on five titles.

The legendary McLaughlin was present to watch the Dubliner win his seventh piece of silverware as Dundalk boss with the potential for an eighth in next month’s FAI Cup final at the Aviva Stadium. And who would bet against the man known as ‘King Kenny’ surpassing the feat in the years to come.

On the field, Pat’s more than held their own against the champions, who rattled the goalframe twice and bulleted another narrowly over in a tight first half. Robbie Benson and Patrick McEleney both saw efforts come off the woodwork in quick succession, with the former suffering an injury in the process. While, shortly before the break, Dylan Connolly’s rasping volley sailed inches over the top.

But, those instances apart, Pat’s were resolute, almost breaking through themselves, only for Daniel Cleary to curb the threat with a vital last-ditch challenge.

A goal did come, though, on 52 minutes and it was a former Lilywhite who put Pat’s ahead. As the ball broke around Gary Rogers’ area, Conor Clifford poked home to stun the hosts.

In what was also referee Robert Harvey’s first return to the Carrick Road since controversially awarding Shamrock Rovers a last-minute penalty last month - which, after being converted, inflicted Dundalk’s first league defeat 14 attempts - the whistler failed to endear himself to the Lilywhites once more. Hoban looked to have been blatantly pulled to the ground just past the hour, but, bizarrely, the whistler refused to point to the spot.

Thereafter, Dundalk launched attack after attack, though Pat’s came closest to finding the net when Ryan Brennan’s snapshot whistled by the upright.

Thus, it looked set to end in an away victory, but Hoban put pay to that notion with a sweet finish, sending Oriel into raptures.

A fitting end to a fantastic campaign. Dundalk FC, champions of Ireland.