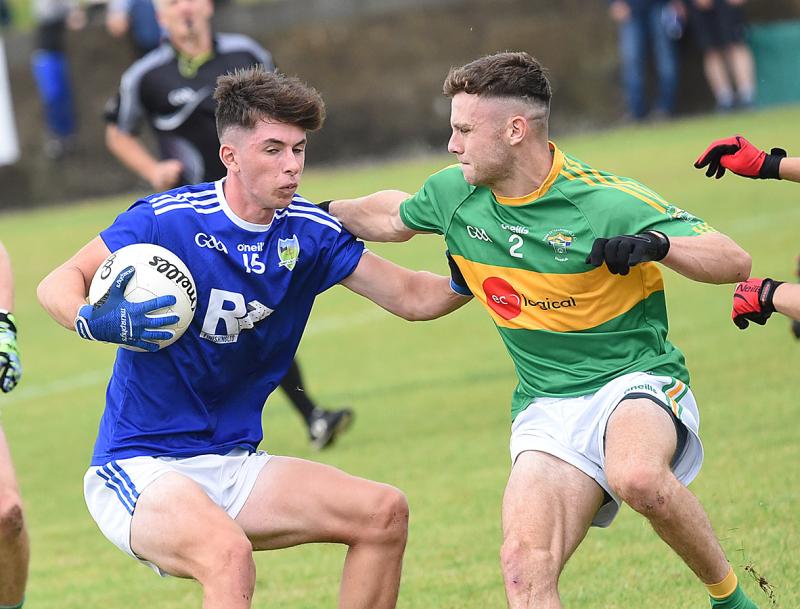 Mark Byrne of Roche has his way to goal blocked by Rob Galligan. (Pic: Arthur Kinahan)

Division 2 got the better of division 1 as Roche Emmets held off the Sean O’Mahonys to emerge as strong favourites to advance as winners of Group 3 of the IFC.

Having kicked nine scores from 11 shots in open play, Roche led by six at the break, however you never have an O’Mahonys team beaten that easily and back they came in the second half with that customary steely defiance.

Roche enjoyed the brighter start, and but for some scrappy last ditch defending from O’Mahony’s Robbie Galligan, they almost were given a goal start. Barry O’Hare was however there to pop the loose ball over the bar for the opening score.

Sean O’Mahonys were undoubtedly missing influential players Stephen Kilcoyne, John O’Brien, Chris O’Neill and Conor Martin due to injury, and Liam Dullaghan’s side lacked direction and guile at times up front. Conor Finnegan did level things up with a close range free.

However, Roche had players all over who could penetrate the opposition’s defence, with the likes of Liam and Sean Dawe, James McDonnell and Glen Stewart all breaking lines from deep, with Caomhin Reilly picked for the sweeper role.

They turned the Sean O’Mahonys over 16 times in that first half, with eight of them coming from breaking down attacks.

From such flowing moves, Barry O’Hare, Shane Byrne and Conor Carthy profited as Jamie O’Hare’s side lead by 0-4 to 0-1 after 15 minutes.

Ben McLaughlin landed the O’Mahonys first score from play after 18 minutes, but Roche continued to treat their supporters to some marvellous kicking from distance, with Gerard Browne firing over a magnificent effort, before Barry O’Hare converted an advance mark to make it 0-6 to 0-2 in Emmets’ favour.

Roche Emmets continued to be fluent in attack, and Barry O’Hare flicked to Mark Byrne who ran across his marker to fire over the bar soccer style.

James McDonnell was certainly a major influence, and the county panel member fired past goalkeeper Kevin Brennan to make it 1-9 to 0-3, and Roche looked out of sight, heading into the break.

The O’Mahonys were keen to remind us all that they were down but not out, and following great work on the endline by Terry Kelly, Thomas Rice, who finished with 18 possessions, fired to the net to give his side hope before the break, cutting Roche’s lead to six points at the interval.

The O’Mahonys approached the second half with those battling qualities that we have grown accustomed to seeing from the Dundalk club over the years.

Liam Dullaghan’s side threw the kitchen sink at Roche Emmets, and it was backs to the wall stuff for the Division 2 side. The Dundalk side introduced Shane Kerrigan from the bench, moving him to the edge of the square, as they decided to kick direct as much as possible.

By the 8th minute of the second half, there was just a kick of the ball between the sides, thanks to three terrific points in a row from Terry Kelly who played a big part in the revival.

Sandwiched in between those Kelly efforts, was a terrific save from Roche custodian Evin Quigley who denied Ben McLaughlin as the Blues scrambled the ball to safety.

Roche continued to create openings on the break. Following a wonderful run, Glen Stewart found himself baring down on goal, however the midfielder chose to pass to Barry O’Hare and O’Mahony’s keeper Kevin Brennen picked up the loose ball.

Barry O’Hare kicked two further scores, in between another Shane Byrne effort, stretching their side’s lead back to six at 1-12 to 1-6 by the 45th minute.

Kyle Carroll was certainly somebody who carried the O’Mahony’s fight and his effort closed the gap back to five. The O’Mahonys continued to kick long and a fisted effort from Shane Kerrigan crept over the bar, and despite another score from Ben McLaughlin, Roche Emmets ultimately held on for a huge victory.

They face the O’Connells this weekend in the hope that they can advance to the quarter finals as group winners. While the O’Mahonys will be hoping that some key players return from injury.