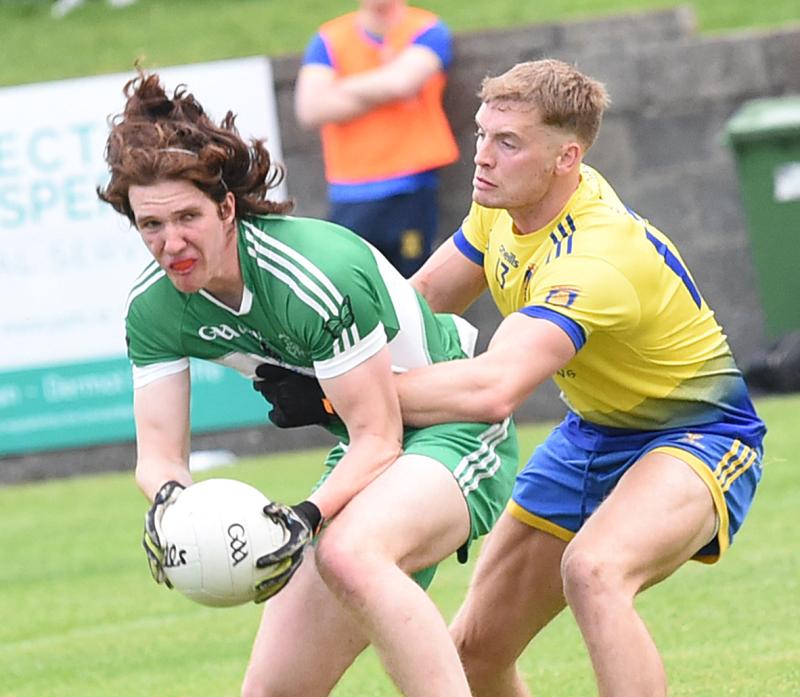 St Mochtas defeated St Patrick for a third year in succession, showing great patience as they bounced back with the last three scores of the match to record a valuable two-point win last night.

Having kept the Lordship men off the scoresheet for nearly 30 minutes, they still found themselves behind going into extra time following a sublime free from the sideline courtesy of Martin McEneaney.

With the tie now in added time, the Mochtas showed nerves of still. Firstly, via a well taken Casey Byrne equaliser. They then held onto the ball for a prolonged period of the five plus minutes of injury time, a brace from Ciaran Byrne and Gerry Garland ultimately proving decisive.

The tie was a slow burner, with conditions at Clan na Gael Park far from ideal for two sides capable of lighting up the pitch with excellent attacking displays. Pat’s registered three wides in the opening eight minutes, the Mochtas one. Both teams looking below their best.

The game caught fire on nine minutes with two great scores. County star Ciaran Byrne was found with a lovely diagonal ball from David Lennon. Under pressure he created some space and pointed. The lead lasted only a couple of seconds as the men in green and white immediately struck the net.

After a quickly taken kick out, Dessie Finnegan ended up catching the Mochtas defence sleeping. He soloed forward at pace before managing to blast the ball under the legs of both Ben Goss Kieran and keeper Jason Callan.

The Tactics were becoming clear at this stage, the Mochtas favoured moving the ball fast, all while having their marquee forwards such as Declan and Casey Byrne come deep in search of the ball and frees.

They drew six in the opposition half alone in the first half, some of which were taken short while the majority were slotted over in what was largely a free taking masterclass from Declan Byrne.

Meanwhile Colin Goss’ troops favoured a move patient approach, going through the phases around the middle, all in the hope of eventually getting it into the hands of Conor Grogan and Daniel O’Connor. County stars Leonard Grey and Jack Murphy the men usually tasked with supplying the long ball.

Both tactics resulted in a point apiece, Decy Byrne from a place ball and O’Connor rising highest near the endline when winning a mark which he duly converted. This was before last year’s Senior Runners up picked it up a gear, firing 1-2 in quick possession to retake the lead.

Byrne grabbed his third of the night from frees, before a turnover from the resulting kick out saw Ciaran McMahon get his name on the scoresheet. Then came a somewhat fortuitous goal on 25 minutes.

A long diagonal ball from Goss Kieran was dropped by it’s target Oisin Callan, only for Garland to pounce on the breakdown and fire home past McEneaney in the Pat’s net to leave the men in blue and yellow 1-5 to 1-1 in front.

Having been kept scoreless for over 10 minutes, The Lordship men finished the stronger, efforts from play via Darren O’Hanlon and Joe Connor coupled with a brace of frees from Grogan leaving it all square at the break, 1-5 apiece.

St Pat’s came fired up, not wanting to fall to the men from Louth Village for a third year in a row. Daniel O’Connor pointed quickly after the restart, while from the resulting kickout they won a simple free that was tapped over by Grogan.

A minute later, another attempt from a placed ball from the Pats’ sharpshooter went wide. This proved to be their last attempt on goals for 26 minutes. Suddenly the long ball gameplan stopped working, the Mochtas mopping up any rare ball that landed near the full forward line.

Their hopes were dented further when Rory Duffy was sent to the line having picked up a black card on 39 minutes. He would be later be red carded having picked up a yellow not long after his return for a poor tackle on an aerial opponent.

Despite the Byrne brothers landing the equalisers, Declan via a monster free from range and Ciaran courtesy of a move that saw him leave his marker for dead, St Mochtas were failing to make their dominance count on the scoreboard.

Four wides in the space of as many minutes encompassed this fact, while the free count of 12 in the second showed that Pat’s were on the ropes. Yet they still entered injury time at the Ecco Road venue in front.

Grogan was fouled on the sideline, but this time it was Martin McEneaney who stepped up to the plate. From a tight angle he ploughed the ball well over the bar. So confident was he in his strike, he turned around to celebrate this bullet the second he had hit it.

All they had to do now was try to hold onto their lead, but St Mochtas has other ideas and finished with a flurry. Throughout the second have Ciaran Byrne was deployed even further up the pitch then in the first half, as they looked to better utilise his pace, strength, running and shooting games.

Pat’s had Kieran Quinn’s side boxed in the corner of the field. Too tight an angle to shoot and too tough to pick out a man in the scoring zone.

A long ball backwards may have seemed a good result for Pats, but Andrew Lennon, the receiver, duly picked out Ciaran Byrne who grabbed the leveller.

Deep into injury time at this stage, the Mochtas got their hands back on the ball again. Showing great patience, they waited and waited for the right opportunity to arise. In the end that honour fell to Casey Byrne, who from a tight angle in the corner pointed to leave his team one ahead.

Regaining possession from the kickout, the insurance score fell to Garland, once more after the Mochtas had ran the clock down while in search of the best chance of scoring.

Over five minutes of injury were played, with last’s year Senior finalists keeping hold of the ball for almost the entirety of this timeframe.

With one hand already in the quarter-finals, the Mochtas’ next challenge is the Newtown Blues in Dunleer this Sunday (throw in 6:30PM) in what is sure to be another classic, one which will show where both clubs are in the Joe Ward Cup pecking order.