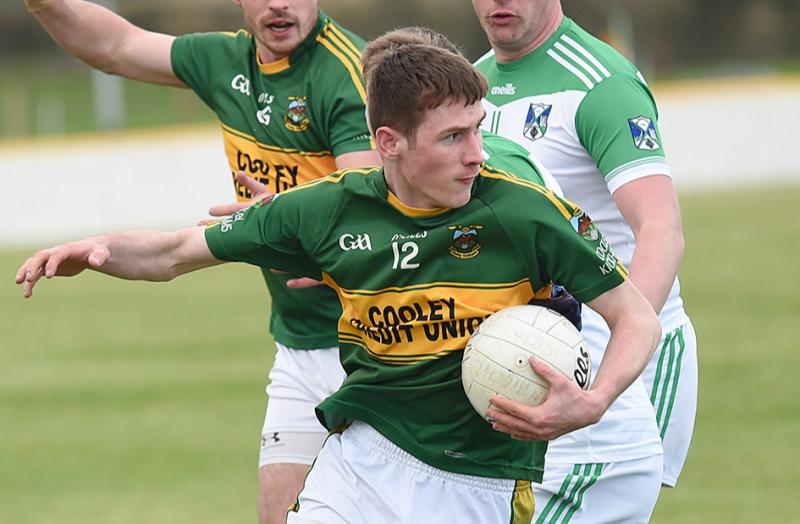 Cooley Kickhams got their quest to go one step better then last year in their search for the Seamus Flood Cup off to the perfect start when they showed just enough class to come out on top against a stubborn Oliver Plunketts unit that never gave in.

On a wet ad windy evening in Darver, it was the men from the Peninsula that got out in front, building up an early six-point cushion that was never wiped out. The Drogheda men dug deep in difficult conditions to make a game of it, but ultimately the gap proved too big.

On a night where it was always going to be tough to produce a good footballing display, the opening six minutes was a largely forgettable affair, both teams struggling to create much of note.

Given this feeling out process, the first score was always going to be crucial, and it went the way of last year’s finalists, courtesy of a free from the boot of Michael Rafferty on seven minutes. From here they began to find their feet, another five scores in a row a following.

They began to dictate around the middle, turning over the ball constantly, either directly from Plunkett’s kickouts or just from a higher intensity and hunger to win the breaking ball.

The lynchpins to their attacks were Cian Connor and Patrick Johnson as they began to move the ball much better. They won free after free, which Connor nicely slotted over. Coupled with efforts from play from Rafferty and Connor, Cooley built up a six point cushion after just 16 minutes.

To their credit the Sean Brassil/Emmet Kelleher managed team didn’t back down, and having barely ventured forward in the opening 20 minutes, they ended up dominating possession for the remainder of the half.

On the edge of the square, Stephen Keeley was a constant threat, his sublime aerial presence seeing him win pretty much any high ball that came his way. This tactic saw the Drogheda men get on the scoreboard via Cian Matthews. After a turnover in the middle, Matthews pointed again.

Another score came via a free from Conor Early and having kept their opponents to just a point in the final quarter, it left them trailing by 0-7 to 0-3 at the break.

The long ball tactics continued to work their magic, Keeley winning a close range free that was tapped over shortly after the restart. However from here they went 17 minutes with raising a white flag.

The Plunkett’s threw everything at Cooley, once more having the lions share of the possession stakes in the final quarter, but they were unable to really do much damage as Cooley matched them score for score.

Points from Cian Brady and Adam Lambe were cancelled out by efforts from Rafferty and Fergal Malone, meaning the Kickhams held on to record a vital six point victory.

They now face off against Junior champions Glen Emmets in Dunleer this Saturday, a tie that looks on paper to be a cracking contest.