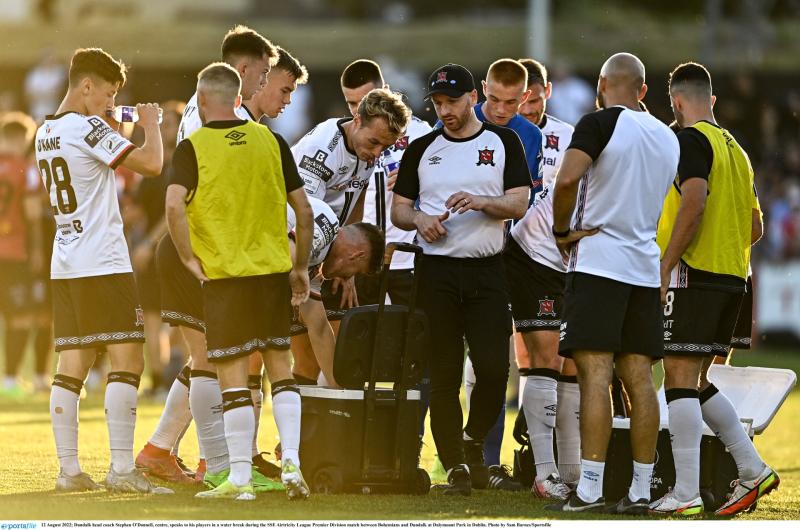 Head coach Stephen O’Donnell has admitted that his dream of leading Dundalk FC to SSE Airtricity League glory in his maiden season in charge could be dead in the water.

Dundalk suffered a 3-0 defeat on Sunday to defending champions and current league leaders Shamrock Rovers, who are now seven points clear, and with a game in hand.

However, O’Donnell has reiterated his belief that his Oriel Park project is ahead of schedule, when factored in there was talk of a possible relegation less than 12 months ago.

“They have a good gap,” he said following Rovers’ win at Tallaght Stadium. “They’d be happy with their night’s work. We just have to focus on ourselves. I think any team seven clear, with a game in hand, with nine or ten games left – you’d have to say that they’re heavy, heavy favourites.

“I keep going back to it, backend of August, you come in second? I don’t think anyone would’ve said that about Dundalk, so we can’t lose sight of it.

“As I said to the players inside, it’d be different if you came out and they’ve just totally out-footballed you. Then you think, well, we’re a good bit off the level, but that wasn’t the case. They played to a game plan. They went very direct and they got their goals off that.”

There’s still a chance of O’Donnell bringing some silverware to Oriel this season, and they continue their Extra.ie FAI Cup quest this coming Friday night with a second-round tie against First Division outfit Wexford at Ferrycarrig Park (kick-off, 7.45pm).

Three days later, they travel to Sligo Rovers for another SSE Airtricity League fixture – a rescheduling that has drawn criticism directed at the governing body from O’Donnell.

“It’s a very busy period,” he said. “I don’t know how you have a match on a Monday off the back of a cup game. Sligo I suppose get a little bit rewarded after being knocked out of the cup. They don’t play for ten days. We have to go to Wexford on the Friday and then play on the Monday.

“You’d like to think the league will look at that next year. I don’t know how we can have a fixture on a Monday after a cup weekend. When everyone’s not playing off the same boat, you don’t know who’s going to be in or out of the cup.

“In my opinion, it has to be after a league fixture, so everyone you know is playing on the Friday and then playing on the Monday. These are little things that need to be addressed, but that doesn’t take away from the fact we’ve a busy period and we’ll need every man.”

To add to O’Donnell’s woes, Dundalk could be without several players for both matches, with new signing and ex-Sligo defender Robbie McCourt the latest to pick up an injury.

“We’ll continue to assess them. Obviously, (Hoban) hurt his calf last week, so we’ll see where we’re at in the coming week with all the lads.”

Brian Gartland, who has sat out the last 15 games, is also on the comeback trail.

“He’s coming along well. He’s been out for so long, so we need to see, but he’s definitely making big strides over the last week or two. He’s kept himself in very good shape, so again, we’ll see how that progresses over the next week or so.

“That’s football. Look, I’m only focused on the future. We have a good group, a small group, but we’ll bring it. In regards their attitude, et cetera, I can’t fault them. We’ll see how the bodies are this week. We’ve a short enough week from Sunday to Friday, and then we’ll go again.”

Friday night’s FAI Cup second-round match between Wexford and Dundalk will be refereed by Adriano Reale (Kildare) and can be watched on LOITV for a price of €5.