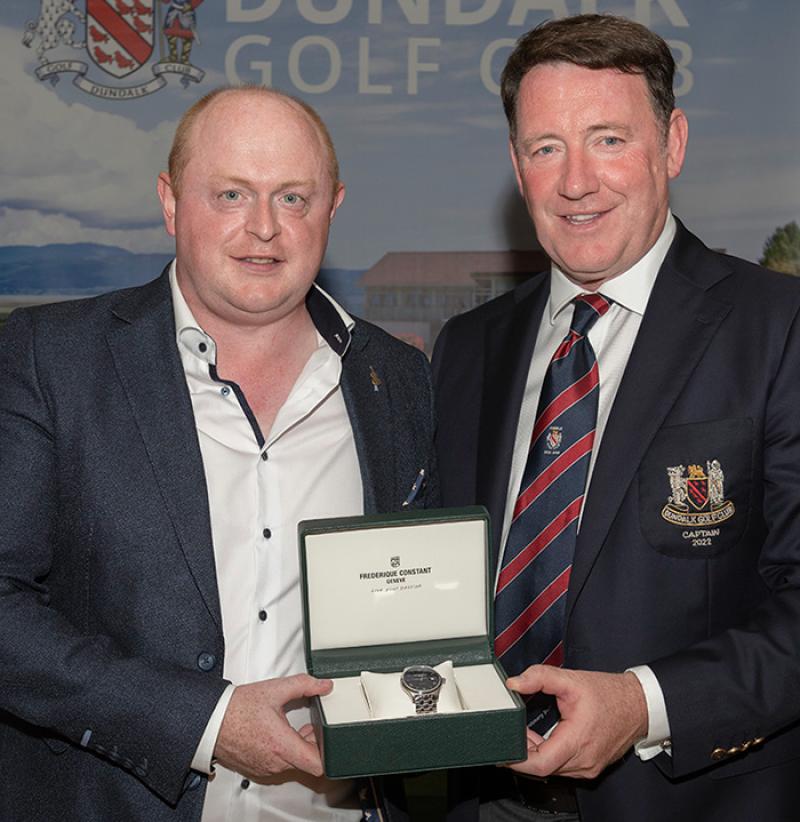 Journalist James Rogers found himself the centre of the story and making all the headlines as he romped to victory in Eoin Doohan’s Captain’s Prize at Dundalk Golf Club over the weekend.

The competition, which attracted 360 entrants, saw qualifying rounds being played on Friday, Saturday and Sunday morning with the top 21 players teeing off on Sunday afternoon in a nine-hole shoot-out for the top prize.

Rogers, with a handicap index of 27.6 and a playing handicap of 30, put down an early marker as he played on Friday and shot a nett 62 which wasn’t bettered when the dust settled at the end of the qualifying rounds on Sunday.

Having only taken up golf a few years ago, Rogers’ hours of practice and perseverance has started to pay off this year and his his qualifying round saw him par the third as he went out in 46 gross for a nett 31. Further pars followed at the 11th, 17th, and 18th as he came home in 46 for another nett 31 and an overall nett score of 62.

Former Captain Gerry Byrne, who played on Saturday, got within three shots of Rogers after shooting a nett 65. Playing off 23 he produced a round that included birdies at the second and sixth and pars at 10th, 13th and 17th as he shot 44 on each nine for a gross 88.

Three players on 72 made the cut and were the first of the 21 players that teed off on Sunday afternoon for the round two shootout down the back nine.

Although he had a massive target on his back, Rogers never gave those chasing him a glimmer of hope as he produced a composed performance over the final nine holes and turned his three shot lead into a seven shot winning margin.

He had two pars at the 12th and 13th and bogeyed five more holes as he covered the nine holes in 46 gross for a nett score of 31, which was the best of the 21 finalists by two shots. That left him with a final total of 93.

Byrne remained his nearest challenger and also covered the back nine in 46 gross for a a nett score of 35 and a two round total of 100 which was good enough for second place overall.

Three other players were involved in the Sunday afternoon showdown as the top three gross players went head to head for their prize.

Irish international Caolan Rafferty emerged victorious from that particular battle as he added a one over par 37 to his three under par 69 from the first round and beat Shane Hession by three shots as Sean Reidy had to settle for third.

Lady Captain Alison Quigley was the winner of the ladies nine-hole competition which took place on Sunday afternoon down the front nine.

The clubhouse was packed on Sunday evening for the presentations by Captain Eoin Doohan, with James Rogers joining a very exclusive club as the winner of the M J Spillane Cup, which is presented to the winners of the Captain’s Prize.

Intermediate Preview: Tough group ahead but O’Raghallaighs look the team to beat