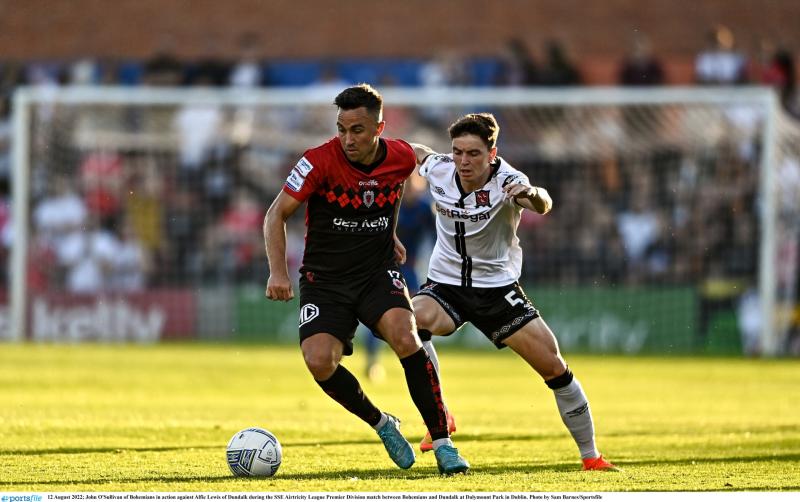 Alfie Lewis says he is transitioning nicely into life at Dundalk FC following his recent transfer from English League One side Plymouth Argyle.

Perhaps ahead of schedule, the 22-year-old English midfielder made his full debut for The Lilywhites in Friday night’s 1-0 win over Bohemians at Dalymount Park.

Lewis spent last season at St Patrick’s Athletic, where he played under current Dundalk boss Stephen O’Donnell, with The Saints finishing second in the SSE Airtricity League before winning the FAI Cup at the Aviva Stadium, beating Bohs in a penalty shoot-out.

“It’s a good group of lads,” said Lewis. “I knew three of them from last year, and then Stevie and Padge (Cregg). It’s been easy to settle in and I’ve enjoyed it so far.”

Lewis, a Londoner who was only two years ago part of West Ham United’s Premier League squad, left St Pats after the cup final to sign for Plymouth, although he confirmed joining O’Donnell with Dundalk at the start of the year had been an option.

“I had discussions with Stevie about coming back at the time, but just thought it was better for me to go back to England.”

Unfortunately for Lewis, his spell at Plymouth didn’t work out as planned, with injuries hampering his time with a club that just missed out on the play-offs last season.

“It was good because the team was flying in the league. They had a good squad there. I went in and had to do a mini pre-season, then I pulled my quad twice, so it wasn’t ideal.

“I was looking forward to going back in pre-season, but then there was interest from over here, and I decided week-in, week-out football was probably the best thing for me.”

Having picked up that FAI Cup medal with St Pats last year, Lewis doesn’t see any reason why Dundalk can’t overleap league leaders Shamrock Rovers in first position come November 4th, and in doing so, add a coveted league medal to his collection.

“Definitely, there’s no reason why not,” he added. “Obviously they’ve qualified for Europe, they’ve got more games. There’s not so much pressure on us, but we’re prepared to push them and take it game by game.

“We go there next week full of confidence after the win today. We know we can take them to the wire. It was similar with Pats last year. You don’t really get talked about until you’re near-enough right up there.

“There’s no pressure on us really. We go there and we want to win. We want to get the result to put pressure on them and go a point behind them. We definitely want to challenge and go for the league.”