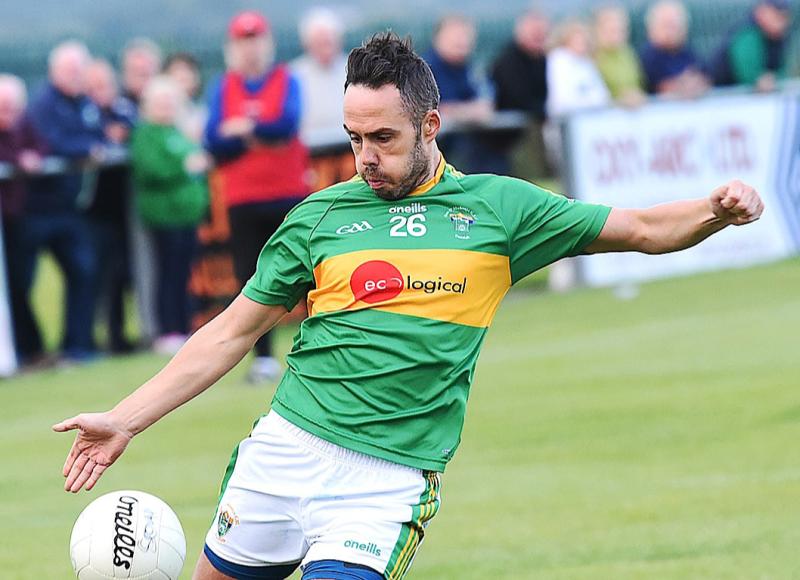 Sean O'Mahony's dug out a hard-fought win over Cooley Kickhams out in Cooley last Tuesday evening to secure Division 1 football again next year.

The O'Mahony's lads got off to a good start, with Vinny Smyth and Kyle Carroll on the mark before Conor Finnegan scored the only goal of the game to help his side lead by 1-5 to 0-4 at the break.

With Brian White, Cian Connor and Enda O’Neill on target, Cooley fought back in the second half and cut the gap to one point.

St Patricks continued to top the pile in the Division 1B as they recorded a draw against a St Fechins side in Lordship who were in desperate need of a victory.

The visitors looked to be heading for defeat when they trailed by three points with three minutes remaining, but they hit back with points from Ryan Walsh (2) and Harry Haughney to claim what proved to be a vital point.

The Fechins were in fine form early on and kicked the opening three points through Niall Devlin (2) and Harry Haughney. Walsh also had the ball in the back of the net, but the Pats hit back with goals from Danny O’Connor and Cathal Grogan to lead by 2-6 to 0-7 at half time.

Jack Murphy added a goal for the hosts on 40 minutes and that looked to be enough to give them the win, only for St Fechins to dig deep in the closing stages and secure a draw.

Goals win games and for St Fechins they also ensure your place in Division 1 next season as their win over the Geraldines at Bealieu was down to the three majors on the night.

Ronan Holcroft found the net at the end of the tight first half to give the relegation threatened side some breathing space as Beanón Corrigan was showing no sympathy to the hosts plight.

Leading 1-7 to 0-4 at the turn Ryan Walsh bagged the two second half goals that made the rest of the game nothing more than a formality. Barra Duffy point off the bench for the visitors.

Cooley Kickhams will be playing Division 2 football in 2023. The hosts came back from behind to defeat neighbours St Patrick’s, but the peninsula men needed St Fechin’s above them to lose to avoid automatic relegation and take the best other option of a play off.

With the other game going against Cooley, Colm Nally’s side were somewhat distracted and trailing anyway until Michael Carron came off the bench to inspire the comeback.

Not wanting to give their rivals anything easy, Jason Woods and Cathal Grogan had Pats in the driving seat until Carron’s intervention and Cian Connor’s effort that saw the relegated side come away with the bragging rights none the less.

Despite the comprehensive victory over Sean O’Mahony’s, Dreadnots relied on neighbours St Fechins not getting a result and losing to avoid a relegation play off.

As it panned out Dreadnots completed their end of the bargain with a heavy victory over a depleted Sean O’Mahony’s outfit. Nathan Sutherland eased the hosts nerves with a first half goal as John O’Brien’s side led 2-8 to 0-1 at the turn.

Barry Faulkner added his sides second goal and Jay Hughes rattled the onion bag in the second half of the obsolete victory. To provide some gloss on the scoreboard, O’Mahony’s finished out the game with three unanswered points.

St Marys ensured their spot in the Cardinal O’Donnell Cup final, as they eased to victory over St Brides at Pairc Mhuire.

An early goal from Ryan Rooney gave the hosts the perfect start and by the time the half time whistle sounded they were very much in control with a 1-8 to 0-4 lead.

The second half saw the Ardee men remain in charge and they eventually came out on top by nine points on a night when Eimhin Keenan, Shane Matthews, Jonathan Commins and Ronan Carroll were among the points.

Newtown Blues picked up their tenth win of the Division 1 campaign at Monasterboice to leave them going into the final game level on points with St Mary’s.

With the championship on the horizon, this proved to be a cagey affair and at the end of a close first half, a Daire Nally goal was all that separated the teams as the visitors led by 1-4 to 0-4.

It was a similar story in the second half, but the Blues maintained the edge on a night when Jamie Kelly, Conor Moore and Lorcan McQuillan were on target. The Mairtins fought back with a Dara McDonnell goal and points from Tom Gray and JP Rooney, but were unable to bridge the gap.

Miss Ireland finalists from Meath, Louth and Dublin got busy on the beach

St Brides and Mattock Rangers played out an entertaining draw on Saturday evening to bring the curtain down on their Division 1 League campaigns.

The visitors were quickest out of the blocks. They raced into a three-point lead before Sean Brennan levelled proceedings on 12 minutes with a goal. The Hosts moved up a gear after this with three unanswered points before the Collon men got a goal themselves through Ben Watters.

The Reds ran out the half with a point from Sean Marry and a Ciaran Deane goal to leave four points between the sides, 2-4 to 1-3 at the interval.

Declan McCoy’s side further extended their advantage with a brace from Marry after the restart. Two points apiece were exchanged by both sides before Brennan slotted over on 41 minutes to give the Knockbridge men a comfortable seven-point lead.

it looked like the hosts had secured the points, however Ben McKenna had other ideas and a brace from their full forward Ben Watters had edged them in front in added time. At the death, Patrick Reilly equalised to give his side a share of the spoils.

St Mochta’s inflicted a big win over Naomh Mairtin at home in Louth Village in the final round of the league. The result might be misleading when looking through both sides team sheets.

Mochta’s however took the game on its merit and Andrew English found the net with an early goal to push on and lead by 1-12 to 0-3 at the turn. Thomas Clarke ploughing a lonely furrow for the visitors.

It was more of the same in the second period with Shane Morgan making it more of a contest.  Declan Byrne and Cormac Smyth added to their tallies and Danny Kindlon found the net off the bench as both sides will now look ahead to championship, although they already might be.

This years Cardinal O’Donnell final pairings played out their meaningless final round with Ardee St Mary’s coming away with an eight point win over Newtown Blues in their own patch.

The margin of victory will be eye catching and a statement ahead of the final and even the championship for Cathal Murray’s in-form side, who now finish on top of the table outright.

Leading 0-9 to 0-3 at half time, Ronan Carroll top scored on the night with six points while Shane Matthews was impressing again. Emmett Murray did well up top for Des Lane’s under strength outfit. 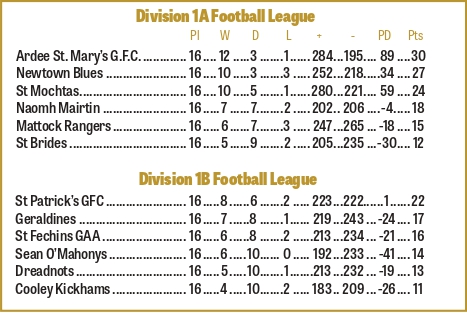