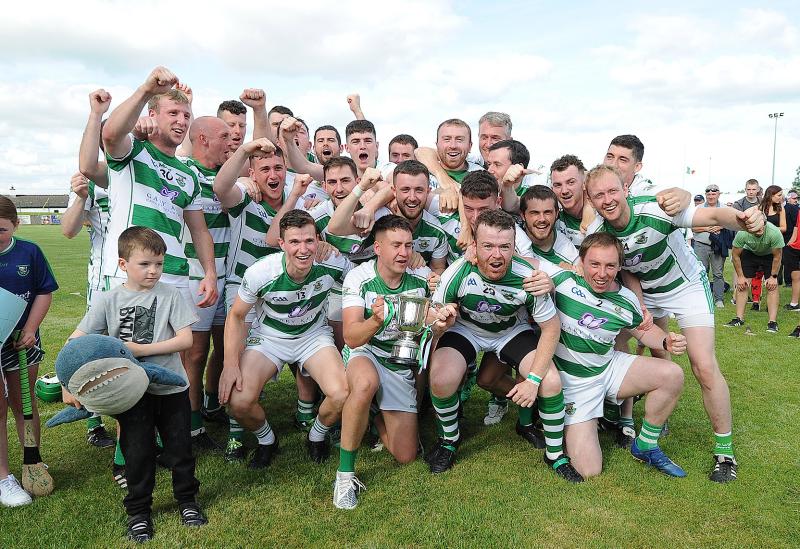 The weather certainly matched the occasion as the sun shone down on Pairc Ui Mhuiri in Dunleer, where holders St Fechins came up against Knockbridge in the Louth Senior Hurling Championship Final on Sunday afternoon.

2020 champions Knockbridge came into this final as favourites having accounted for both Sunday’s opponents and Naomh Moninne in the group stage of the competition. They scored early goals to build up good leads in both games and were hoping for a similar start in this final.

However, things did not pan out as they would have wished, and they found themselves playing catch up to the Fechins for most of the first half, having conceded two early goals and trailed by seven points after just six minutes.

Both sides had their periods of dominance throughout the match and after they went in front courtesy of their first goal, the Fechins never at any stage looked like relinquishing their lead.

The nearest Knockbridge got to their opponents was two points early in the second half but the Fechins somehow managed to hold them scoreless for most of the second half on their way to a well-deserved victory.

Knockbridge were first off the mark inside 30 seconds when Gareth Hall gained possession on the right wing to fire over the opening point.

The holders responded with their opening score two minutes later when a David Stephenson delivery found the ever-dangerous Paul Matthews who soloed through before firing past keeper Conor Kerrigan.

Sean Marry was then pulled up by the referee for over carrying, with Paddy Lynch firing over the resultant free from inside his own half.

Lynch added another one from play in their very next attack and his side added a second goal on six minutes when Paul Matthews passed to Barry Devlin who found the net from 13 metres out, leaving the men from Termonfeckin 2-2 to 0-1 in front.

Knockbridge responded with a long range pointed free from Ricky McKeown and a good point from the right wing by the lively Robert Wallace on 11 minutes.

They almost grabbed a goal moments later when Shane Fennell forced a save out of County keeper Rory Morrissey at the expense of a 65-metre free.

McKeown was off target from the resultant free and from the puck out that followed Paul Matthews made a terrific high catch that led to a good point from 45 metres, his sides first score for over six minutes.

A fine brace of points from the sticks of Hall and Wallace on 13 and 17 minutes managed to reduce the deficit to four points, 2-3 to 0-5.

Centre half forward Seaghan Conneely was influential in getting his side through to this final, accounting for 1-3 in the recent draw against Naomh Moninne, and he grabbed his sides next score firing over from the right wing.

A point from a 65-metre free by Shane Fennell was added to by a long-range effort from David Kettle and now only three points separated the teams.

The Fechins managed to restore their five points lead when Sean Kerrisk set up Paul Mathews for a good point from the right wing and on 25 minutes Paddy Lynch fired over a long range free awarded for a foul on Conneely.

These scores counted for little as Knockbridge struck for the games third goal on 27 minutes when a Ricky McKeown line ball was knocked into the path of Sean Marry by Gareth Hall, with Marry giving the keeper no chance.

The Fechins found their form in the time that remained to the break and midfielder Donal Ryan scored a good point which was added too in injury time by a pointed free from Paddy Lynch. There was also still time for Robert Wallace to respond with his third point of the half.

In the last action of the half Lynch took his tally to five with the assistance of the right-hand post and the teams went into the dressing rooms with the men in the hooped jerseys leading by 2-9 to 1-8.

The South Louth outfit extended their lead with the opening two scores on the resumption. Firstly a good five man move ended with Danny Morgan scoring from 20 metres out after just 25 seconds.

Seaghan Conneely then set up Sean Hodgins to score from a very tight angle, before Knockbridge struck for their second goal on 34 minutes. It saw Sean Marry playing Robert Wallace through as he fired high into the roof of the net, leaving his side trailing by three, 2-11 to 2-8.

A late tackle on Liam Molloy presented Shane Fennell with the opportunity to reduce the arrears to two which he duly did from the resultant 20 metre free. However, despite there still being 22 minutes to play in this encounter, that Fennell score would turn out to be their last in this final.

Paddy Lynch responded with his sides first score for some ten minutes when he fired over a free from the right wing, 2-12 to 2-9. Sean Marry went close to tying up matters on 45 minutes as he saw his effort go across the face of the goals, scraping the left-hand post.

Fennell should have added a badly needed point from an easy 20 metre free, but his weakly struck effort was easily cleared by the Fechins defence.

A foul on captain Peter Fortune saw Paddy Lynch pointing from half-way and the eventual winners went five clear with five minutes remaining after Sean Kerrisk pointed off the end of a good solo run.

Lynch then took his match winning tally to eight points from a 20-metre free on 57 minutes. Moments later Danny Morgan grabbed a good point from play to leave his side seven points to the good, the same lead they held six minutes into this match.

A flurry of late bookings from referee Kevin Brady marred the end of the match with Knockbridge finishing with 14 men as Michael Keane received his marching orders after a second yellow card.

The final whistle was greeted with great celebrations among the Fechins players and supporters as the Paddy Kelly Cup headed south of the county for the second year in a row.