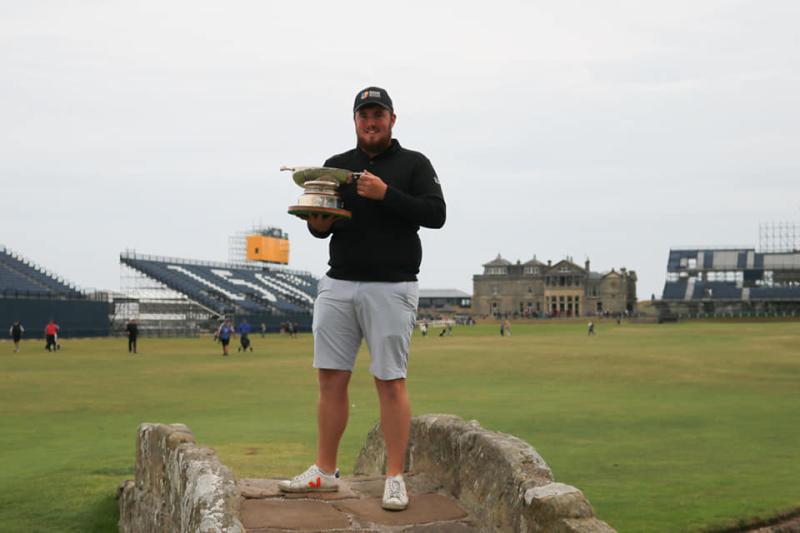 Eoin Murphy poses with his trophy on the famous bridge at St Andrews, where he secured the Boyd Quaich Memorial Trophy

Eoin Murphy’s impressive season has finally yielded a trophy and it came at the home of golf, when he won the Boyd Quaich Memorial Tournament at St Andrews.

Representing Maynooth University where he is a Harrington Scholar, the Dundalk Golf Club player recovered from a disappointing opening round of 74 to post three rounds in the 60s and finished with a memorable birdie on the 18th hole of the Old Course where the Open had concluded barely two weeks previously.

The tournament was played over the Old and New Courses at St Andrews and Murphy opened on the Old Course where a double bogey at the infamous Road Hole saw him sign for a two over par 74 that left him well down the field after the first round.

Four birdies and just one bogey on the New Course in Round 2 saw him shoot a three under par 68 on day two and the following day on the same course he went one better with a four under par 68 that included six birdies in the first eight holes.

It was back to the Old Course for the final round and after bogeying the third, Murphy responded with back to back birdies at the fifth and sixth to go out in one under par.

Another birdie followed at the tenth and although he dropped a shot at the 13th he got it back at the next. After parring the next three holes he finished in style with a memorable birdie on the famous last hole at St Andrews.

His final round of 69 left him level on eight under par for the tournament with Scotland’s Ben Fuller, who was representing the hosts St Andrews University. But Murphy claimed the trophy on countback as his final round was two better than Fuller’s 71.

“Any time you get to play at the Home of Golf at St Andrews is a good week and to birdie the last to win a tournament is a nice feeling,” said Murphy afterwards.

“It was a bit unlucky for Ben playing with me to shoot the same score overall but lose on a countback. It’s not a nice feeling but I knew I had him on the countback and hit two decent shots and holed the putt.”

Murphy hadn’t won an elite tournament since taking the Munster Boys U16 Championship in 2016, but after finishing sixth at the North of Ireland and reaching the third round of the South of Ireland, he had travelled to Scotland full of confidence.

“It probably is the greatest win. The U16 Munster Boys was the last time I won a proper golf tournament so, just because of where it is, it’s hard to top that. Not many people get to say they have won at St Andrews.”