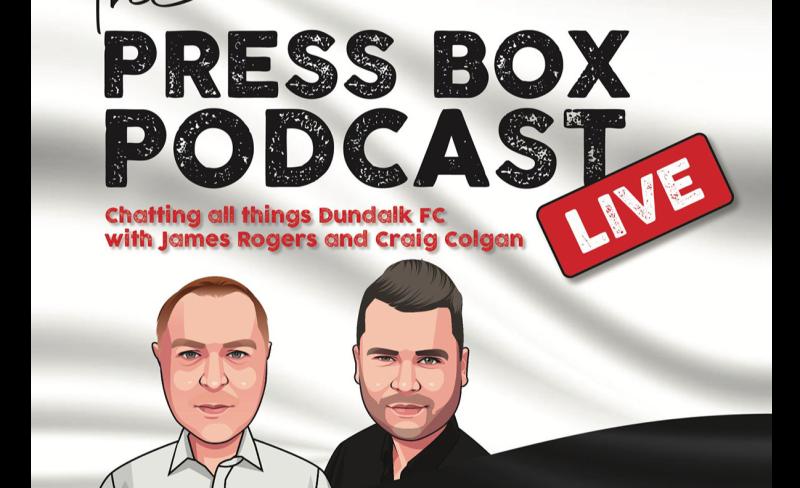 With no home games to look forward to for the rest of this month, Dundalk FC fans can get their football fix when local podcast The Press Box hosts its first ever live event in The Spirit Store on Wednesday August 17.

On what promises to be a revealing night for all Lilywhites fans, guests include former Dundalk FC boss Filippo Giovagnoli and current club Chief Operating Officer, Martin Connolly.

The Press Box is a weekly podcast hosted by sports reporter James Rogers and Craig Colgan, owner of Blackrock-based Sailor Sharkey Barbers and formerly of LeagueofIreland.ie.

Also lined up on the night are former local TD Dermot Ahern, who will be outlining the league’s future direction as part of his role as the FAI’s chairman of the National Leagues Committee and super fan Derek Pepper, who will be displaying some of his huge collection of match worn jerseys from down through the years.

With plenty more surprises planned, it promises to be a great night for all with an interest in the SSE Airtricity League.

The star guest is undoubtedly Giovagnoli though.

The Italian was a shock appointment as Vinny Perth's successor in August 2020 but ensured his place in Lilywhites folklore by guiding the club to the Europa League group stages and an FAI Cup final success over Shamrock Rovers in the months that followed.

This led to his permanent appointment by then club owners PEAK6 but Giovagnoli's time at Oriel Park was not without its complications, with the 51-year-old being sidelined somewhat the following season due to a lack of a Pro Licence as newly appointed Cobh Ramblers boss Shane Keegan took on the title of first-team manager.

Now he is set to speak for the first time since his leaving to give his thoughts on his tenure at Oriel Park, what it was like working with then chairman Bill Hulsizer and CEO Jim Magilton, and much more.

Podcast co-host Colgan said: "We're really excited for the show and we wanted to line-up some big guests for it so we're flying Filippo in for the night.

"He has never really discussed his time at Dundalk so this is his chance to put his side across.

"It's a new venture for both ourselves and The Spirit Store, who are hosting their first ever live podcast, but we hope to put on a brilliant night of entertainment for both Dundalk FC and League of Ireland fans in general."

Tickets for The Press Box Live are on sale now from www.spiritstore.ie, priced €18.