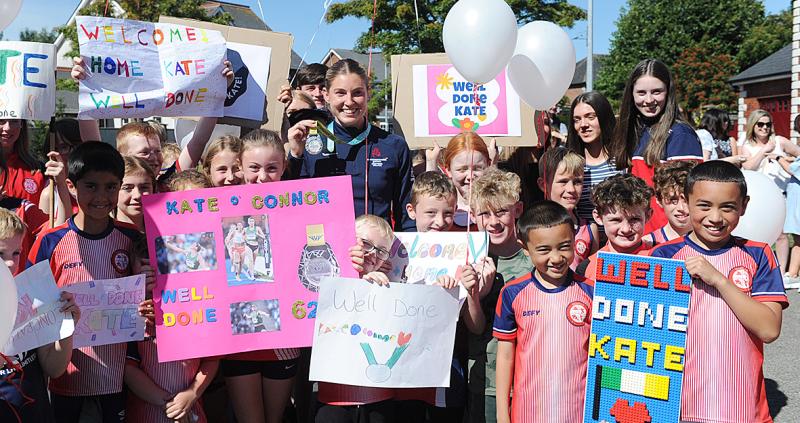 Kate with her medal and members of St Gerard's AC. Photo: Arthur Kinahan

Local athlete Kate O'Connor was given a hero's homecoming yesterday (Monday) when she arrived back in Dundalk after winning a silver medal at the Commonweath Games.

The former student of St Vincent's Secondary School in town, who is a member of the Dundalk St Gerard's Athletics Club, represented the Northern Irish team, as she was born in Newry, and came home with an impressive silver medal following a spectacular final day in the gruelling seven sport contest in Birmingham.

Members of her club, St Gerard's AC, were out in force to welcome the medal winner as she arrived back to her Dundalk home in Belfry Gardens yesterday afternoon.

The young athletes holding placards saying “Well Done Kate” and “Welcome home” along with balloons, greeted the heptathlete as she proudly showed off her silver medal. 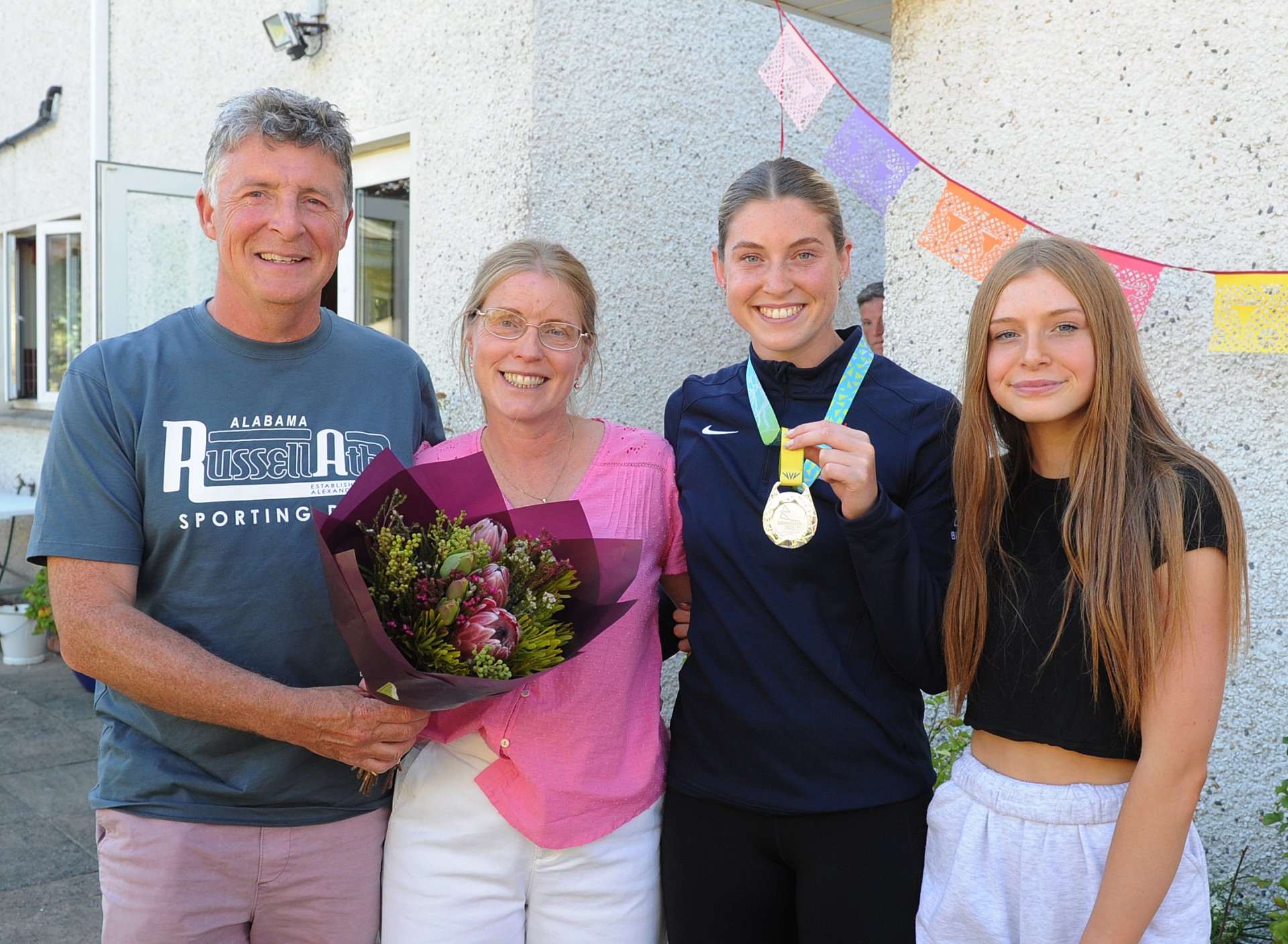 One of the toughest competitions in Kate's sport, the heptathlon comprises running events, the 100M hurdles, 200M and 800M, the shot putt and javelin from the throwing disciplines alongside the long jump and high jump. Only a true athletics all rounder has any hope of success.

Day one began with the 100M hurdles, where she set a new personal best of 13.74 to finish in fourth position. She followed that up with another PB in the 200M race where her time of 24.73 saw her grab third spot.

Some impressive efforts on the field, which included a shot putt of 13.73M that was not matched by any other athlete, alongside a decent high jump attempt of 1.78M, left her in with a real shout of a medal going into the final day, as she sat in second place.

The 21 year old had a slight setback in the opening event of the day, the long jump, a mid place finish seeing her fall back into the pack. However her best was yet to come.

O'Connor thrilled the crowds in Birmingham with another personal best, this time in the javelin as a superb throw of 51.14M saw her back into the battle for a medal. That throw was almost seven meters better then 2019 World Champion and reigning Commonwealth title holder Katarina Johnson-Thompson.

They were the top two going into the 800M race, the final of the seven disciplines, the current champion holding a narrow 136-point advantage over O'Connor. That meant she needed to finish ahead of Johnson-Thompson to grab the Gold Medal.

The Dundalk based runner was unable to dethrone her more experienced opponent, O'Connor finishing in fourth and Johnson-Thompson grabbing second place. However fourth was enough seal a sliver medal with a final tally of 6233, 21 clear of third place Jade O'Dowda.

The Englishwoman ended the race one place in front of Kate, but with points calculated by your final time and not your finishing place, O'Connor stayed narrowly ahead.

They were split by less than half a second (2:14.00 versus 2:14.48), collecting 907 points versus 900, meaning O'Connor had done enough to land a silver, besting her previous performance at the Games in 2018 where she finished eighth.

“I'm buzzing for myself, I couldn't have asked for anymore” she stated when speaking after the event to Athletics NI.

“One of my big worries was going out and finishing that 800M race and making sure I didn't lose that silver medal, which I didn't thankfully. I've come away with Northern Ireland's second ever athletics medal and I'm just so proud of myself.” 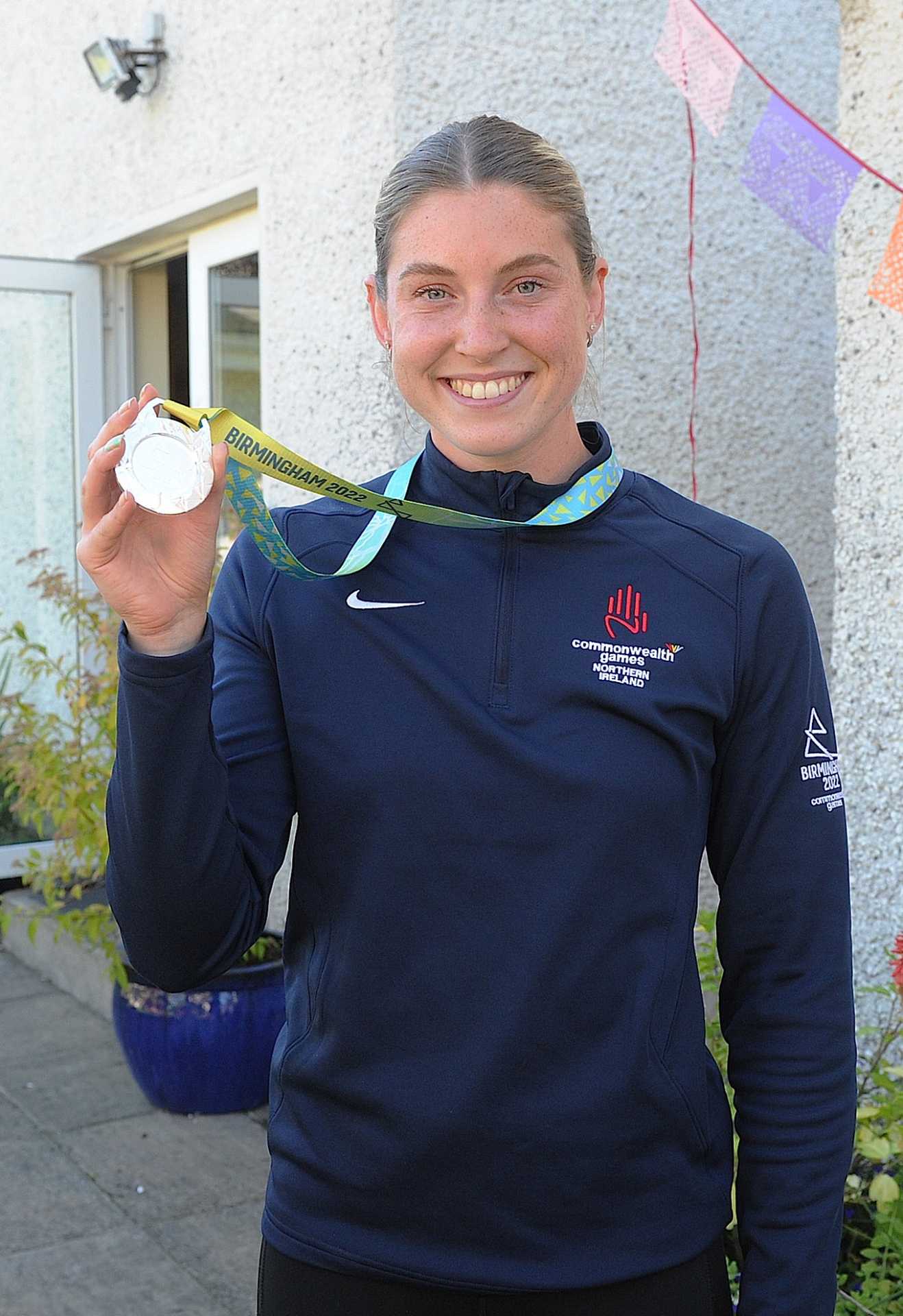 She was due to be in action again today in the javelin event, but has decided to give this a miss to instead prepare for the upcoming European Championships.

O’Connor wasn’t the only local woman partaking in the Games, with World Champion boxer Amy Broadhurst also in action over the weekend.

Boxing in the 63KG category, the St Bronagh’s clubwoman breezed through her semi-final bout against Cynthia Ogunsemilore.

A knockdown in both the second and third rounds saw her coast to a unanimous decision.
She was a clear favourite in Sunday’s final despite needing to overcome English boxer Gemma Richardson on her own patch.

Broadhurst, unlike in earlier bouts, came out of the traps fast in the opener, a series of impressive left hands giving her an early lead.

Her opponent battled back gamely but just hadn’t the class to deal with the reigning World Champion who has now won a second straight major title.