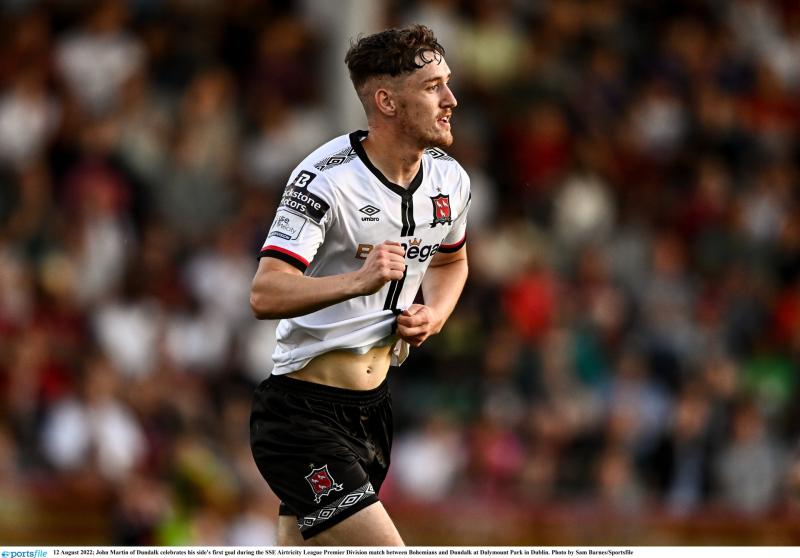 Dundalk handed a start to Ryan O’Kane, who played out on the left flank, while new signing from Plymouth Argyle, Alfie Lewis, made his full debut in the centre of midfield.

Chances were few and far between at either end in the first half, but it was Bohs who had the first opening on four minutes when Ciaran Kelly hooked off target from close range.

Dundalk were dealt a blow on 12 minutes when Patrick Hoban, only back from an injury, had to come off after he was on the receiving end of a challenge from Jordan Doherty.

The Lilywhites had the first shot on target on 31 minutes when after a neat one-two between Joe Adams and Steven Bradley, the former fired a shot straight at Tadgh Ryan.

Hoban was replaced up front by Martin, and he forced Ryan into a better save following what was some good work from O’Kane after he had done well out on the left-hand side.

Out of nothing, Dundalk hit the front in first-half stoppage-time when Darragh Leahy’s long punt completely caught Ryan off guard, allowing Martin to nip in and touch home.

Now attacking in front of a strong travelling support, The Lilywhites had opportunities to make it 2-0 early in the second half; first when Adams curled off target, before the lively O’Kane showed quick feet before forcing Ryan to get down low and produce a good save.

The game turned on its axis once more on 52 minutes when Ethon Varian broke through on goal before being brought down by Andy Boyle, who was red carded for his trouble.

Bohs tried their best to lay siege, but barring Jonathan Afolabi hitting the post in the 87th minute, created little, as The Lilywhites withstood eight minutes of stoppage-time.