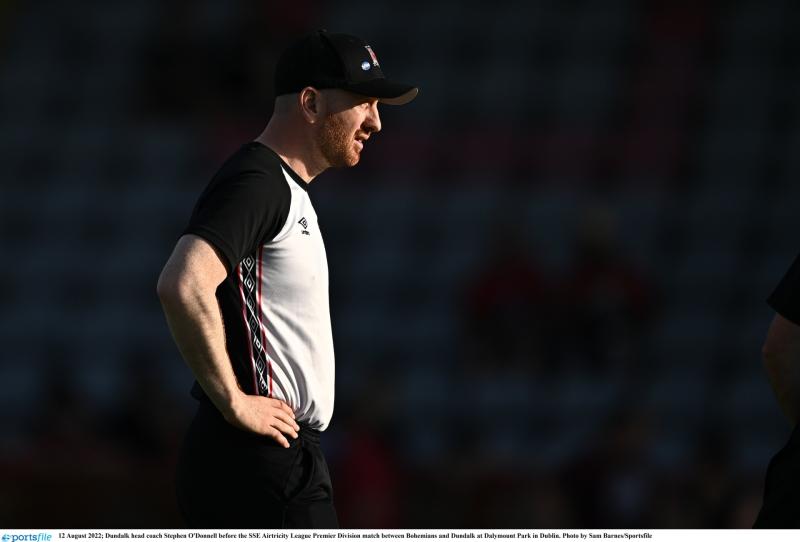 Stephen O’Donnell refused to rule out an SSE Airtricity League title charge after witnessing his Dundalk FC side dig deep to eke out a 1-0 win at Bohemians on Friday.

Playing with ten players for most of the second period, The Lilywhites battled hard to cling onto the three points after Tadgh Ryan’s own goal had given them a half-time lead.

At the same time, Derry City were held to a 0-0 draw at home to Shamrock Rovers – a result which moved Dundalk four points ahead of The Candystripes in second place.

Indeed, should they emerge victorious against Rovers this Sunday evening at Tallaght Stadium (kick-off, 7pm), they would move to within a single point of the league leaders.

Quizzed on whether his team were now title challengers following their hard-fought win over Bohs, head coach O’Donnell responded: “We’ll see. People build you up and then they knock you down.

“We want to be consistent in our mentality. Basically, we just train well and work hard for each other. That’s the bottom line and we’ll see where it takes us.”

By the time Sunday arrives, Rovers will have just come back from Hungary, where they play the first leg of their Europa League play-off tie on Thursday against Ferencvaros. The Hoops fought hard but were beaten comfortably 4-0.

Even failure for Rovers would still see them drop into the Europa Conference League group phase, guaranteeing six more midweek games between September and November.

However, O’Donnell doesn’t necessarily believe an arduous fixture schedule such as this will have much baring on the title race and cited the Rovers squad depth as a key factor.

“I think you see with their changes tonight and the team they played tonight, that they have a lot of riches in reserve. We’re a little bit smaller, our squad.

“We’ll see how we are this weekend, but whatever team Rovers play on Sunday after they play Thursday is going to be a strong team. We’ll get our lads ready, recover well and see where we are.

“We have nine days to prepare as best we can. It’s a brilliant venue in Tallaght, a great pitch and against really good opposition.”

O’Donnell confirmed that Robbie Benson and Paul Doyle are both closer to making a return to fitness, but Patrick Hoban (calf) is unlikely to feature against Rovers, while Andy Boyle will face a one-match suspension for his straight red card against Bohs.

Mayowa Animasahun is also unavailable, as the defender has been loaned out to Irish League side Dungannon Swifts, who are managed by ex-Dundalk player Dean Shiels.

The win over Bohs marked what was only Dundalk’s third win on the road this season, and O’Donnell faced criticism in the aftermath of his last visit to Tallaght in April when he made wholesale changes to his starting line-up before succumbing to a 1-0 defeat.

“When you look at it, the few games we’ve lost show. We lost to Rovers away and we lost to Drogheda away twice. Not that we didn’t approach them properly, but we know if we drop down to a certain level, anybody can beat us, so there’s no point in talking.

“We just need to keep putting in the work rate, keep training well and be ready to rock. As we keep saying to the lads, there’s going to be more players involved.”

Sunday’s top-of-the-table clash between Rovers and Dundalk will be refereed by Robert Harvey (Dublin) and can be streamed live via the LOITV platform for a price of €7.