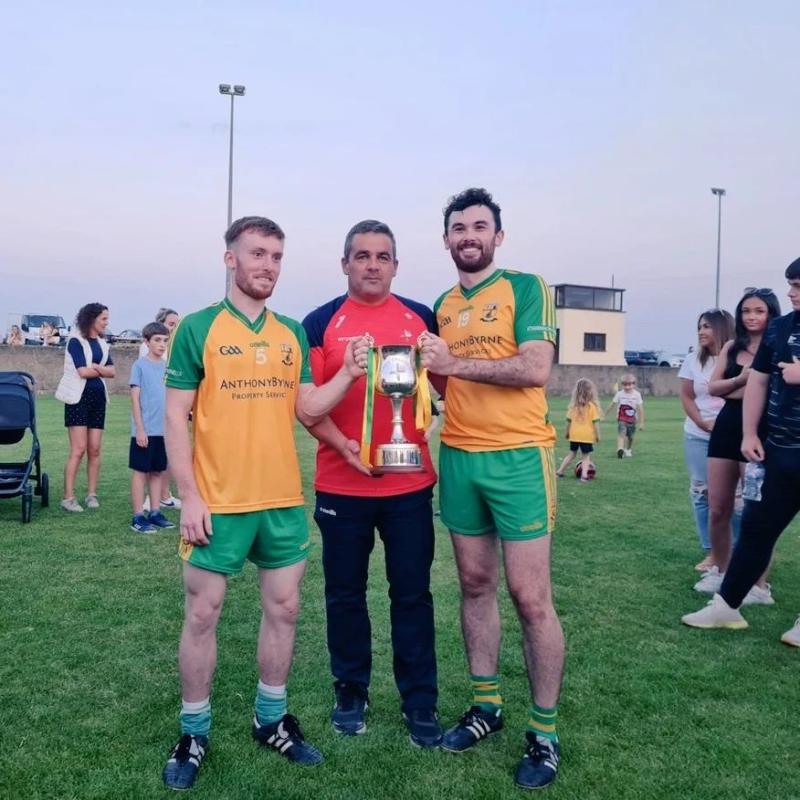 Stabannon Parnells did what they had to do at home to win the 3A league title with a comprehensive victory over St Nicholas. With the Tones in contention also, Parnells made sure with a hefty margin win right from the get-go.

Such was their intent the result was never in doubt, Derek Crilly showed all his experience to land 1-4 in the opening half to tee up the league champions for success.

Philip Kirwan was having a good game for the visitors but they trailed 1-12 to 0-3 at half time and there would be no shock on the cards.

Robbie Callaghan got in on the act with a great second half goal and all that was left to do on the night was the raising of the trophy by long serving joint Captains David Cluskey and Thomas Campbell.

Wolfe Tones got the win but not by the required margin to overtake Stabannon at the summit of Division 3A. Such was Parnells victory, the Drogheda side would have needed a winning margin of 40 points to claim automatic promotion.

Five points was the difference in the end but Martin Rice and Jay Finnegan’s side trailed early on when one of the stars of the division James O’Connor found the net once again for the hosts.

Vitally however, Tones worked their way back into the game and promising youngster Liam Gaffney found the net just before half time to make it 1-7 to 1-5 in the blue and yellows’ favour.

The Tones took control of the second half and despite Rory Phelan’s quick brace the promotion chasers grinded it out near the end. A play off for a place in 3A against Naomh Malachi is the prize for last year’s league winners.

Sean McDermott’s ended their season with a flourish with an eight point win over Dowdallshill in Churchtown on Saturday night. Two goals in as many minutes from Colin Curran set the home side up for a winning end.

With Tommy Kirk back at the helm the hosts were worthy winners as Dowdallshill’s challenge sweltered in the record hot August sun. Half time it was 2-7 to 0-7 but the ‘Hill did hit five points in a row to reduce the game to one point at one stage.

BJ Matthews sealed the victory however with his side's third goal and the win saw McDermotts off the bottom of the 3B table with their second win of the season, overtaking Cuchulainn Gaels in the process.

John Mitchels first game in four weeks resulted in a good workmanlike win over Cuchulainn Gaels and a nice boost to their cause heading into the championship this weekend.

First half, the visitors started slow against a very organised home team. Despite that barricade, the Mitchels found themselves a point up at half time thanks to the returning Trevor Matthews.

After a stern talking to from Noel Tuite and Tommy Freeman at half time Mitchels and John Gallagher put in a brilliant second half display to run out comfortable winners despite Cian McDonald's best efforts for the Gaels.