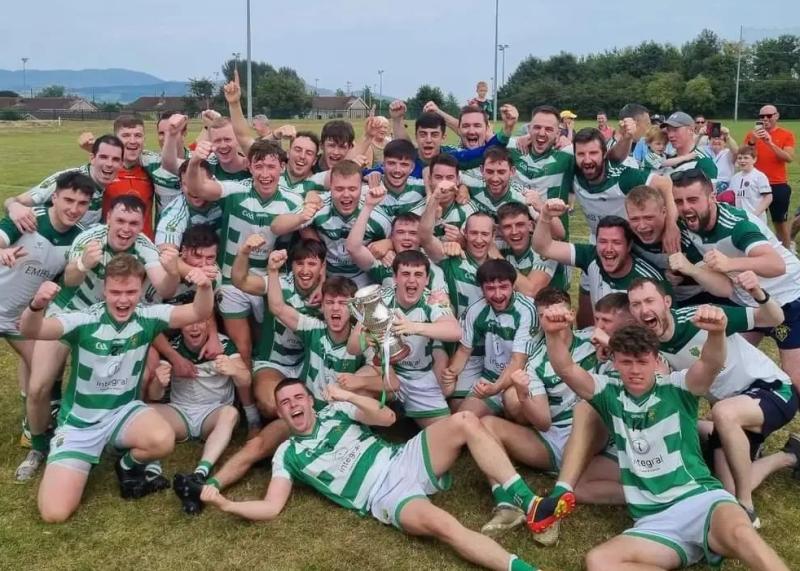 An astonishing second half comeback saw O'Raghallaigh's crowned Division 2 champions on Sunday afternoon. A 12-point turnaround victory over Dundalk Young Irelands did the trick as the champions trailed by nine at half time.

Peter McStravick, Dean Maguire and Cathal Ferriter all found the net to make it 3-7 to 0-7 at half time. The second half was an entirely different game, as the Drogheda side came out like men possessed.

Ben Rogan provided the best possible start with an early goal quickly followed up by the returning Danny Reilly who came off the bench at half time to tap home their second goal.

With the tide turned, Ruairi Moore and Kyle McElroy controlled the outcome and made sure there would be no further twists. Delighted Hoops captain James Moonan raised the cup in front of his relieved teammates and supporters.

At various moments on the day the Gaels were going up automatically, but with O'Raghallaigh's finally getting the win it, meant the Dundalk side would have to settle for the play-off spot.

The two Byrnes, Shane and Mark once again made things competitive for a Roche side short of numerous starters, but Dylan McKeown had the visitors ahead by 0-7 to 0-5 at the short whistle.

Second half goals by Gary Shevlin and James Stewart ensured the victory for Cathal O'Hanlon's outfit and a tussle with the Dreadnots further down the line in that play-off when both sides exit the championship.

Hunterstown Rovers beat their neighbours St Kevin's by double scores at home in a do or die promotion clash but, in a search for promotion, Rovers needed other results to go their way to have a chance and by the end of the day the win was in vain.

Despite missing out on league success, Rovers will take a lot away from the victory ahead of the championship. Ryan Burns' penalty opened up an insurmountable gap in the first half for Kevin's to chase.

At the turn it was 1-4 to 0-3 and the Philipstown men could not avoid their second defeat in a couple of days to bring what was a promising league campaign to a disappointing end.

A Billy Smith hat-trick was enough of a spark for Clan Na Gael to finish the league with aplomb over O'Connell's. With both teams safe it was a chance for fringe players to claim places in the upcoming championships and it was the visitors who ran out easy winners.

Conor Noonan got the Clans first point of the game and teammate Billy Smith had the ball in the net a couple minutes later. Jason Cullen got the Dundalk side’s second point, and they landed another five before Robert Quigley got the home team’s first point after 20 minutes.

Smith got his and his team's second goal of the game to make it 0-3 to 2-7. The second half continued the same way as the first with the visitors getting two of the first three points before Smith got his hattrick.

Cian Doyle raised the green flag for the hosts, but it only served to make the scoreboard look a bit better. The Ecco road side scored another 3-4 before the final whistle with the goals coming from Paul Martin, Shay Coleman and Jordan Byrne to finish their league season with a win.