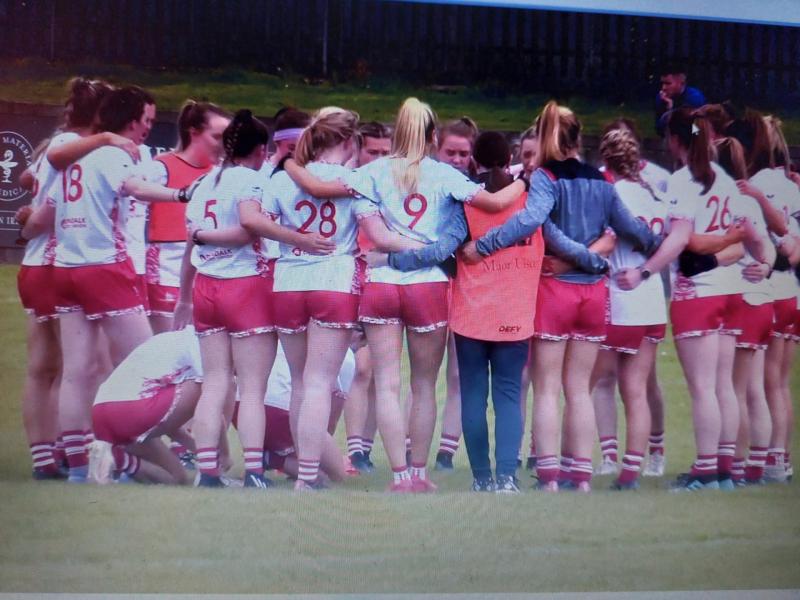 The Louth team prior to their clash with Down

Louth swept away the cobwebs in some style, producing a sublime defensive display against Down at Clan na Gael Park in Dundalk to get their Intermediate Championship off to a perfect start.

The Wee County struggled to get away from their neighbours and never had a huge cushion to fall back on. Down looked menacing at times, but when it really mattered it was Louth that stepped up to the plate getting the scores to eke out a well earned six point win.

Despite it being their first game of the campaign and having had a prolonged break since their exit from the Leinster Championship, it was Wayne Freeman’s troops that came out of the blocks the sharper team.

Louth began with a high intensity game, moving the ball swiftly and constantly cutting their neighbours from the North open with a mix of pacey solo runs and accurate kick passing.

They took the lead on four minutes, Eimear Byrne soloing through the heart of the Down defence before duly teeing up Laura Collins in the corner. Louth won the resulting kick out and pounced on goal, but despite the prospect of an empty net Kate Flood chose to drive it high and over the bar.

The work rate early on saw them forcing many turnovers, particularly around midfield and with the pace in their team it never took them long to get into scoring positions. Another such turnover followed and a lovely solo run by wing back Aoife Russell saw Louth go three clear.

The Wee County were well on top at this stage and only for two other poor misses could have had built a proper cushion to defend for the remainder of the contest. Instead their pacey game was resulting in errors which allowed Down a platform back into this contest.

The home side went 13 minutes without a score, the lion’s share of possession now coming from the Girls from Ulster. Their attack was concentrated around Jessica Foy and Natasha Ferris and when this duo linked up Down looked like scoring.

It was a nice solo run from Foy that lead to the visitors’ opening point on 10 minutes, as she glided through a couple of tackles and teed up Aimee Greene. This was quickly followed by scores from Aoife Keown and Foy from play to level proceedings.

Louth tended to take their kick outs short and this suited the Ernesiders, who pressed up on them in the hope of causing mistakes. Winning back the ball in this fashion, Down even took the lead momentarily courtesy of the first free of the day from who else but Jessica Foy on 17 minutes.

The home side needed to react and did so well, a high ball near the square was won by Ciara Woods as the Wee County finally broke forward again and she was duly fouled. The resulting free was nicely slotted over by Laura Collins.

The Newtown Blues attacker was the Girls in White’s most potent threat, either as a target in the corner or when coming deep to win the ball before soloing forward. Whatever she got up to, Down struggled to ever even place a hand on her.

It was Collins that helped set up their next score, her work rate helping to tee up Rebecca Carr, before also getting her side’s final point of the half with a monster score from range. Yet Down was resilient and continued to grab points which meant at half time they were deadlocked at six apiece.

The second half began with a cagey opening ten minutes. With so many of the matchups being hard fought neither team wanted to make a mistake. It lead to some patient play from both sides, who continued to feel each other out.

While attempts on the posts were slim, it was Louth that made sure every effort forward counted, their running game again proving difficult to defend while some quick kick outs from Rebecca Lambe Fagan were also allowing them to cut through the Down rear guard.

Carr finished off a nice team started by Lambe on 35 minutes, while a lovely solo run from Aoife Halligan resulted in a free that was easily slotted over by an in form Collins. Foy ended a a 16 minute barren spell for her side with a free, but their attack was just not getting the service by this stage.

It wasn’t from a lack of possession, but Louth were defending gamely. They set up deep and allowed Down to come at them, but they were posing no threat as Freeman’s troops kept them well away from the scoring zone.

On the ball Louth were a lot more comfortable and happily played a patient, attacking game. Further points from Aoife Halligan and Collins extending their lead to four as the tie entered into additional time.

Down needed a goal to have any hopes but just could not break down a machine-like, well drilled home side who never let up in their work rate. They made tackle after tackle, block after block, with Eilis Hand in particular deserving of praise having on numerous occasions stopped Down in their tracks.

The visitors did manage to bag one more free before the tie was rubber stamped in Louth's favour with a superb late goal on 63 minutes. A long kick out eventually found it’s way to substitute Seona Halligan, who darted forward before chipping the ball over the head of Aisling Burns.

A well-deserved win for the Wee County, who will now look to build on this success when they finish off the group stages against Clare, a side which dispatched Down with much more ease then the Wee County. A win would see them top the group.