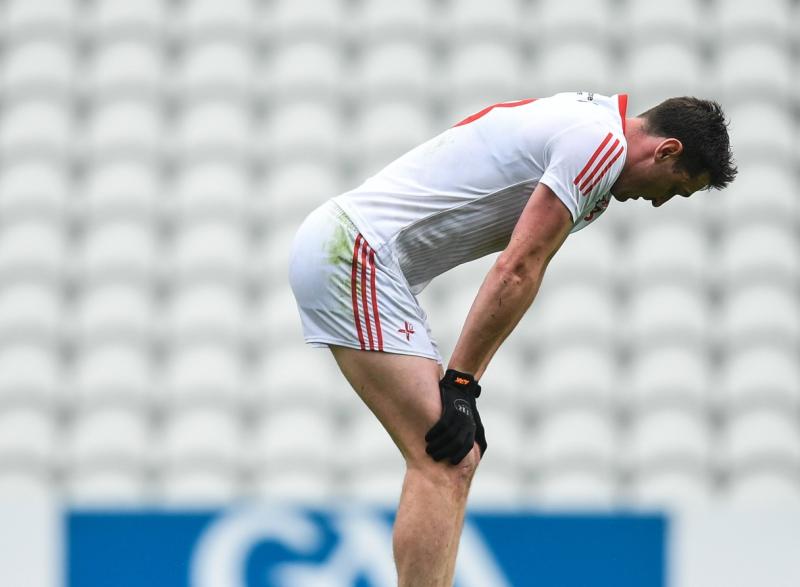 Tommy Durnin of Louth reacts after the All-Ireland Senior Championship Round 1 match between Cork and Louth at Páirc Ui Chaoimh. (Photo by Eóin Noonan/Sportsfile)

All Ireland Senior Football Championship Round One

Louth have been knocked out of the All-Ireland Championship as two late goals helped Cork on their way to victory in what was a gruelling tussle in Pairc Ui Chaoimh.

Despite having the lions share of the possession, the Rebels struggled to shake off a Louth side that made them work for every score. However, two vital goals in the final 10 minutes from Brian Hurley and Colm O’Callaghan proved decisive in bagging their place in Round Two of the Qualifiers.

From the off it the hosts that started the stronger, the tactics we would see from both sides quickly becoming clear. Cork with the breeze in their favour managed to retain the ball for the majority of the opening two minutes, happily going from one sideline to the other, again and again.

Louth were defending in numbers, at least two lines of defenders always awaiting any man in a home shirt, as the vast majority of the team stayed behind the ball. They would always look at their most dangerous when forcing turnovers and playing on the break.

Defensively this worked a treat early on as they kept the Rebels off the scoresheet. That was until the seventh minute, a good run from Ian Maguire drawing a foul, the free calmly slotted over by Stephen Sherlock. Two more points from Sherlock and Brian Hurley saw them go three clear.

Drawing fouls has been key to the Wee County’s success in 2022, with Sam Mulroy seen as one of the country’s best sharpshooters. However early on he would struggle with the wind, dropping one free short and missing the other.

Yet their setup was keeping the home side relatively contained, keeping them to just those three scores in the opening 22 minutes of action. They were even level after 18 minutes when bagging the tie’s opening goal.

Louth pressure saw them intercept the ball off Daniel Dineen in their own half, before then breaking at pace. Mulroy would tee up Liam Jackson to finish off what was a great counter attacking move.

The sides traded scores courtesy of Mulroy and Sherlock, but as the game creeped closer to half time, the counter attacks became slimmer and slimmer. Cork still had the lion’s share of possession and continued to work extremely hard to break down a well drilled Louth rear guard.

Eoghan Sweeney and John O’Rourke both drew fouls and with Sherlock on form these were guaranteed scores as the Wee County began getting trapped in their own half. These were followed by a monster score from the boot of Brian Hurley.

When getting free Louth looked like scoring, particularly when getting the chance to run at Cork, a Niall Sharkey solo run forcing a free which was tapped over by Mulroy. While a superb attack from defence by Dan Corcoran saw him add another score that left Louth one behind at half time, 0-7 to 1-3.

With the wind now in their favour, the visitors came out of the traps fast. The Louth captain tapping over another free shortly after restart. But tactically things didn’t change, Mickey Harte’s troops continuing to go with their ultra-defensive mindset.

Throughout the tie pretty much every Cork kickout was taken extremely fast, as they looked to catch Louth out of shape. On many occasions it worked a treat, as Sherlock was fouled following a quick break. His free from close range negated Mulroy’s earlier effort.

The home side were turning the screw on Louth, forcing turnovers constantly as the men from the East tried desperately to create attacks. The problem was they were just not getting forward quickly enough when in possession and with everyone behind the ball there was nobody to offload to.

Mulroy bagged another free, however from here they went close to 20 minutes without a score. In fact they created very little at all outside a Niall Sharkey attempt that dropped short and another effort that went well wide of the target.

To their credit they didn’t concede much ground during this prolonged period without a score as Cork still needed to break down a dogged Louth defence. They bagged two just points.

A goal would put the tie in their favour and at every opportunity they looked to get past James Califf. The main tactic was pumping the ball into the corner before unleashing a quick diagonal ball towards the goals. The closest it came to working was on 50 minutes when Brian Hayes whipped a ball towards Hurley only for a Louth defender to get a vital touch.

Sherlock nicely slotted over the resulting 45 before a monster point from range courtesy Hurley left the Rebels three in front with five minutes of normal time remaining.

Louth needed to remain calm and keep the ball out of their net and with fresh legs from the bench they were now getting forward a bit more frequently. The problem was Cork knew of their threat on the break and tended to foul anyone on the ball to stop any counter-attacks hurting them.

Just when they needed a score most, Harte’s troops were hit with a huge sucker punch when the home side finally found the net on 66 minutes. A turnover in the Cork half saw them break at speed, a fine team move finished off by the lethal Hurley. The gap now stood at six points.

This seemed to galvanise the Louth attack and they quickly bounced back with three scores in a row via Liam Jackson, Ciaran Downey and substitute Tom Jackson. Suddenly they had found their attacking groove and with two minutes of additional time left on the clock a draw looked possible.

Sadly, this newfound enthusiasm among the visiting supporters didn’t last long, another goal essentially clinching the victory for the Rebels. This time it was Sherlock who was the provider for Colm O’Callaghan who restored their six-point cushion with just seconds left of the allotted four minutes.

Remarkably from the resulting kick out another substitute Conor Grimes managed to grab a goal as Louth once again showed what they can do when moving the ball fast. But at this stage time was their biggest enemy, while a final free from Sherlock saw Cork prevail by four points.