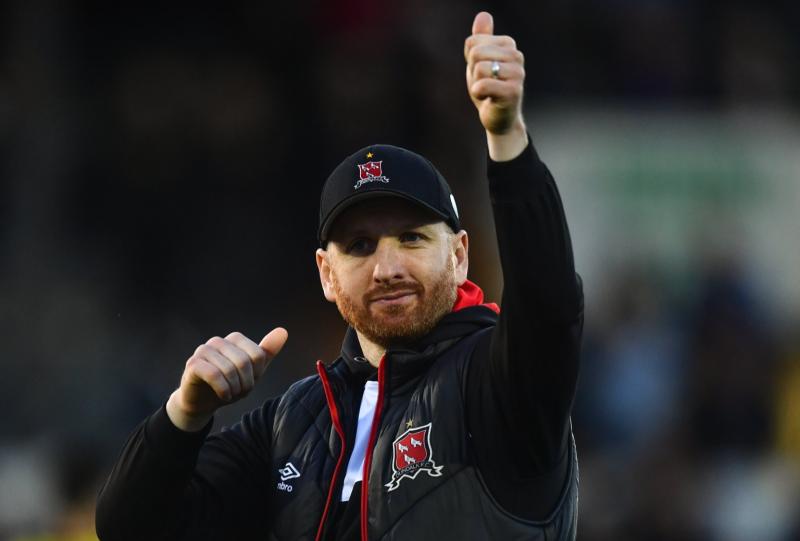 Talk of a potential SSE Airtricity League title race has been played down by Stephen O’Donnell, who insists his Dundalk FC players are keeping their feet on the ground.

The Lilywhites made it seven unbeaten and four wins on the bounce on Friday night after they recorded a 1-0 win over O’Donnell’s former employers, St Patrick’s Athletic.

Daniel Kelly’s decisive first-half goal secured a sixth consecutive win at Oriel Park for Dundalk, who moved up to second in the table at what is the halfway point of the season.

After putting six points between themselves and St Pats in fourth, Dundalk are now looking up, and victory in their next fixture against Shamrock Rovers at home on June 17th would edge them to within five points of the table-toppers with a game in hand.

However, the Dundalk head coach doesn’t believe his team belong in such discussions.

“No, we’re not really,” he said when asked if Dundalk were title challengers. “People jump ahead so quick. We lost 5-1 at home here to Bohs (in pre-season) and then we lost away to Waterford.

“That’s the facts. That’s where we were. I’m delighted, but we’re taking it each game as it comes. If we had lost our last three, what would you be asking me?

“It’s all a process. We’re delighted with the first half of the season. We’ve lost two games in 18 and we’re now changing the draws into wins.

Dundalk recorded just one win from their opening seven matches under O’Donnell, but six wins from their last seven has propelled them up the table and into second place.

Not only has no team conceded fewer goals from open play this season, Dundalk, with a healthy tally of 34 points, are ten better off than they were at the same stage last year.

In fact, in his first 18 games in charge, O’Donnell has amassed a point more than Stephen Kenny did in 2013 when The Lilywhites eventually just missed out on the title.

“We need to keep it going now because as quick as that first 18 can go, we’re only halfway through. It all depends now on the second 18.

“It’s very similar in the sense of Stephen (Kenny) having to build right from scratch. It just shows you what a performance he done in regards the first half of his season and everyone knows that story. We just focus on ourselves and I’m delighted with the application of the players.

“We’re delighted with our start, but it’s only halfway. You can see the fine margins. There was a few scrambles in the box there for Pats to get an equaliser. We’re delighted and I think the break is coming at not a bad time, just to sort of re-evaluate and re-energise ourselves.”

With their respective loan deals from Stoke City and Dundee United expiring at the end of June, the top-of-the-table clash with Shamrock Rovers on the 17th of that month could be the last time Lewis Macari and Mark Connolly don the Lilywhite jersey at Oriel.

Macari has been offered a contract extension at Stoke and is unlikely to stay at Dundalk beyond the terms of his initial agreement, but O’Donnell hopes to retain Connolly, who isn’t keen on returning to Scotland, but has garnered interest within the Irish League.

With the risk of losing both players, O’Donnell has remained tight-lipped on possible additions that could be made to his squad once the summer transfer window opens.

“It’s still a bit far out. We’ll see what happens in the next couple of weeks, or if there’s good players available, but they have to be good players because you’re going to have to be a good player to get into that team.

“We’ll see where we’re at. I haven’t really had a chance. Our last week has been hectic in regards preparing for games, so we’ll talk through that and we’ll go through that in the next few days.

“We’ve started peripheral conversations, but we’ve not gone in depth, so we’ll see where we’re at over the next week now because it gives us an opportunity.

Dundalk’s scheduled trip to Sligo Rovers on June 11th has been postponed following the news that Nathan Shepperd and Joe Adams were both named in the Wales squad for their upcoming UEFA U21 Championship qualifiers versus Netherlands and Gibraltar.