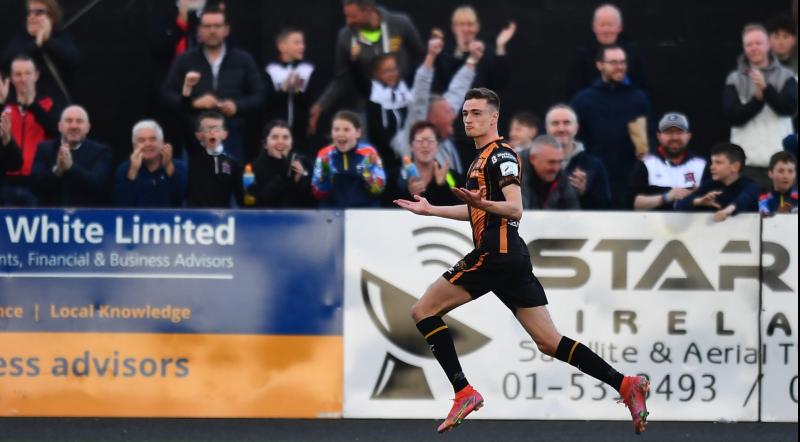 Dundalk FC are up to second in the SSE Airtricity League table after beating St Patrick’s Athletic 1-0 in what was another hard-fought win for Stephen O’Donnell’s team.

Daniel Kelly’s 24th-minute winner was enough for The Lilywhites to claim a fourth win on the bounce and extend their unbeaten run to seven as they moved above Derry City.

St Pats were unchanged from their 3-0 win over Bohemians on the same night, and they created the first opening at Oriel when Nathan Shepperd had to save from Eoin Doyle’s header on two minutes after he had gotten on the end of a Sam Curtis right-field cross.

Dundalk’s first attempt on goal came on 11 minutes when Adams wrestled away from St Pats skipper Ian Bermingham, but his low shot was easily gathered by Joseph Anang.

Kelly scored the winner in Dundalk’s recent win over Harps, and after connecting with a good Lewis Macari delivery, his acrobatic effort wasn’t too far off hitting the target.

The Lilywhites, wearing their change strip because of a kit clash, were beginning to turn the screw at Oriel, with Adams firing a long-range shot which flew just wide of the mark.

They took the lead seconds after that when the menacing Kelly capitalised on a mix-up between Curtis and Bermingham before rounding Anang to score his fifth of the season.

That goal came as a result of a Patrick Hoban ball over the top, and the Dundalk frontman almost got himself on the scoresheet, heading just wide from a Macari cross.

At the beginning of the second half, St Pats created some sustained pressure which resulted in a Chris Forrester volley from outside the box trickling wide of the post.

Keith Ward was linked with a move to St Pats before the season started and his cross from the left on the hour mark was almost turned into his own net by Joe Redmond.

At the other end, Shepperd had to keep out Billy King’s effort from a tight angle, while Eoin Doyle fired an attempt from distance over as the game entered its closing stages.

Shepperd was the hero for Dundalk as he somehow clawed away Mark Doyle’s header at the back post, shortly before he brilliantly pushed a Darragh Burns effort over the bar.

From the resulting corner, the Welsh U21 goalkeeper denied Anto Breslin before Dundalk withstood five minutes of stoppage-time to claim yet another crucial victory.