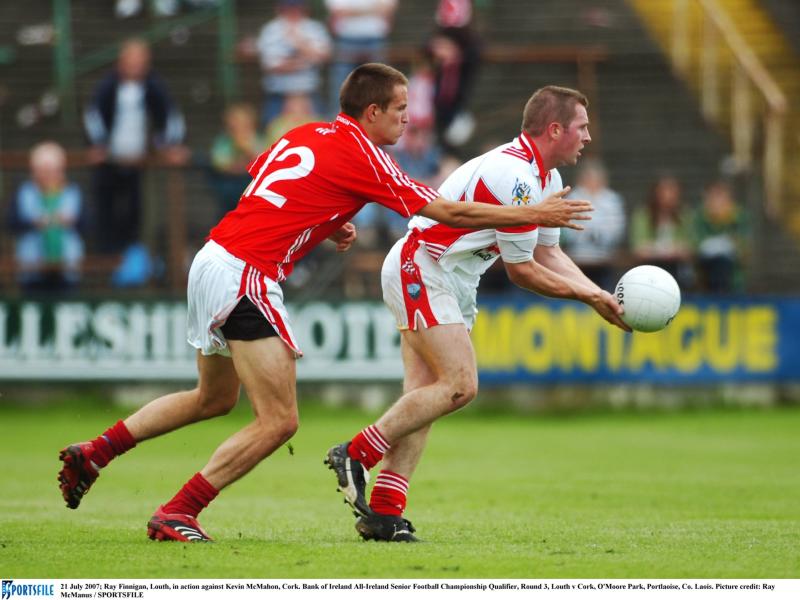 Ray Finnigan, Louth, in action against Kevin McMahon, Cork in action during their meeting in the 2007 All Ireland Qualifiers

Cork footballers could have packed it in altogether had they not come up with a half-decent performance in their Munster championship tie with Kerry a number of weeks back.

They had been lambasted throughout a terrible league campaign, and to have reacted differently than they did, would have left them in a worse position than ever before.

Their fiercest critics, having their say on a very public forum, were standing on soapboxes made in enemy country.

Pat Spillane was chief among them. Not only would that have made it harder to take, it should have galvanised the Rebels into trying to rescue something from the latter stages of the points competition.

It didn’t, and when the final tot was done, they were near the bottom, very close to being relegated.

They didn’t go close to beating Kerry at Pairc Ui Rinn, but their showing was better than anything they had come up with in the points competition. A final scoreline of 0-23 to 0-11 was just a little unkind to them.

And where does that leave Louth going into a clash with the other wearers of red-and-white in Saturday’s All-Ireland championship clash?

If Mickey Harte’s team had done better against Kildare in the Leinster, you’d have to say not too bad. But it wasn’t a good performance at Tullamore, and like the opposition, the visitors to Pairc Ui Chaoimh are trying to make up ground.

The record book reads in Cork’s favour. Yes, Louth won when the counties met in the All-Ireland final 65 years ago, but a victory hasn’t come this way since in any match of consequence.

In the only championship meeting – a qualifier at Portlaoise in 2007 – Cork finished the stronger to win by two points, before going on to be beaten by Kerry in the only all-Munster  All-Ireland final.

There have been a number of league meetings, Cork winning nearly all of them. Louth’s costliest defeat was in the game played at Saturday’s venue – before it got a makeover – in the 1994/’95 competition.

Needing a win in their final Division Two tie to gain promotion, after wins over Galway, Mayo, Tyrone, Armagh and Limerick, and just one defeat to Clare, Louth were taking on a team to whom the points were of no value.

That still didn’t stop Cork from giving it a good go – good enough as it turned out to get them over the line, by 2-6 to 0-8. Then at the top of his game, goalkeeper Niall O’Donnell reduced Louth’s chances of victory by his absence through injury.

Louth got a second chance a few weeks later to move up to the top tier, but didn’t take this one either. A play-off with Tyrone in Clones went the Red Hands’ way, 1-10 to, 0-9.

A couple of years later, Louth skated through their Division Two campaign to qualify for a meeting with Cork in the quarter-finals, but this was another one that got away. And to make matters worse, there was no reward for finishing top of the table other than a trophy and medals.

Croke Park decided to revamp the leagues for the following season, giving each county equal status, their finishing position deciding where they would be placed for the campaign after that.

That’s all in the past – of greater importance is what’s coming up on Saturday. Harte has kept the pressure on his panel since the Kildare match.

None of the 40 has been allowed to play club football, a decision which hasn’t been met with widespread approval. There’s been a weekend away, and Darver has been continually in use. That’s vital, because fitness will be essential on Ui Caoimh’s wide expanses.

Cork will have planned on how to counter the threat of Sam Mulroy. The Naomh Mairtin clubman is Louth’s ace-in-the-hole, sure to have figured in Leeside team talks. He shook off the shackles placed on him in the league in fine style, emerging as leading scorer over the four divisions. He can’t, however, be left to do it on his own.

Conor Grimes, Ciaran Byrne and the others up front can play a part, and at their best, midfielders Tommy Durnin and Conor Early – if that’s who Harte and Gavin Devlin settle for – can provide the supply. Cork moved well enough in attack for times in the Kerry match to suggest they’ll trouble the Louth backs.

It would be a great match for Louth to win, but even if it brings defeat, it will give the team another opportunity to learn what to expect when they get involved in next season’s Division Two league campaign. Derry and Dublin will be there along with Cork and Kildare, and that can only be testing.