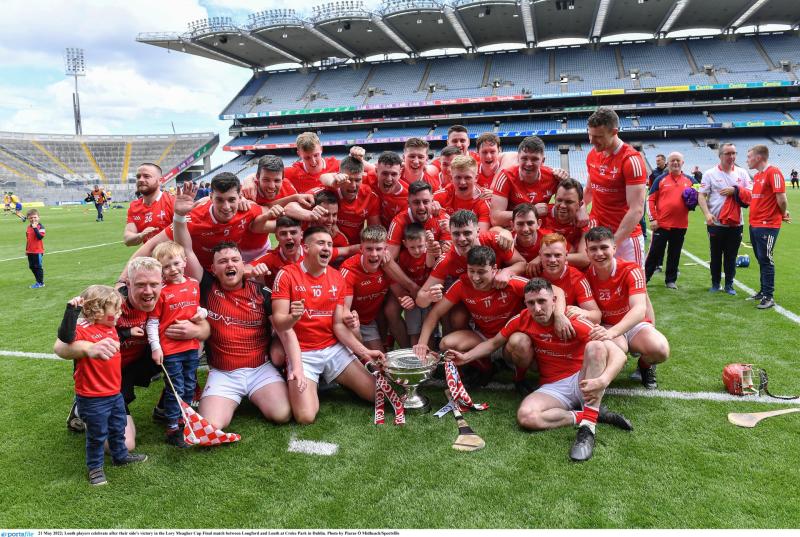 It was another day to remember for the Louth Hurlers, as they became the most successful team in Lory Meagher history by landing a third title in Croke this afternoon.

Although faltering in their earlier round robin meeting, Paul McCormack’s troops were rarely troubled in this tie. Turning on the style when required and booking their place in next year’s Niky Rackard Cup final via a decisive 14 victory.

Despite the large margin of their win, it was the men from the Midlands that started the brighter. Paddy Lynam pucked in a diagonal ball for Joe O’Brien in the corner and he managed to claw free from the grasps of Matthew Fee. His close-range effort ending up in the back of the net.

It was soon followed by fine scores from Cathal Mullane and Rueben Murray, as Longford went five clear after just seven minutes of action in HQ.

Louth could have been rattled by this setback, however from the off it was clear they were the more physical team. And in reality, as the half drew on they showed that they have the more skilful hurlers.

They showed a complete dominance around the centre of the park, turning over Longford time and time again from their own pucks out, thus leaving the men in Blue and Gold soaking up huge pressure. Of the nine opening restarts from both teams, Louth won the ball seven times.

Throughout the tactics when regaining the sliotar was to pick out Paul Matthews, who was usually found close to the square. In the 70 minutes of action, the St Fechin’s clubman skinned his marker Enda Naughton, a Galwegian, who by all accounts had been one of their better players this year.

Feidlleim Joyce was another who was a big danger, as he drifted up and down the field in search of possession. He got his first six scores from play to get the Wee County off the board on seven minutes.

It didn’t take long for them to draw level, with Matthews to the fore. He got his hands on a long range free before noticing Seaghan Conneely in space. From close range he rattled the net, while a lovely point from range by Darren Geoghegan left the teams all square.

Now firmly on top, Louth were able to starve Longford of possession, putting them under relentless pressure with their pacey play and keeping the Midlanders scoreless for over 20 minutes. In that time the Men in Red hit them for 1-3 to build up a six-point lead.

Geoghegan, Matthews and Joyce all pointed nicely before a crucial green flag was raised courtesy of Matthews. Liam Molloy launched the ball towards the square for Matthews, who turned Naughton and calmly slotted the ball under the legs of Conor Gallagher and into the net on 26 minutes.

That could have been curtains for Adrian Moran’s side, but to their credit they managed to claw together a mini comeback, grabbing four in a row as they finally found some solace in the battle around puck outs.

Their renaissance was backed by Paddy Lynam, by far their most prolific forward in this final. He put a 65 over the bar to end their barren spell with a score and quickly added to it when getting on the ball in the corner following a rare turnover.

Cian Kavanagh then got in on the act before another nice point from Lynam left the Midlanders trailing by two. However, McCormack’s troops showed an ability to turn the screw whenever required and finished the half with a flurry.

Geoghegan, Joyce, Conneely and Liam Molloy all fired over, leaving the Wee County in front, 2-9 to 1-7, at the break.

There was no relenting from Louth, who came out from the dressing rooms fired up and had added to their lead within seconds of the restart. A foul from the throw in gave Geoghegan an opportunity from pretty much the centre of Croke Park and he did not disappoint.

The sides traded scores, Geoghegan added two more to his tally in between a point apiece for Joe O’Brien and Lynam. Two more white flags were raised by Geoghegan and Joyce, while a series of poor misses from Longford in between saw their confidence begin to falter.

Louth never backed down from their opponents, as they continued to enforce their superior strength around the puck outs. Conneely in particular was a huge thorn in Longford’s side, winning pretty much every aerial battle and either forcing a free or quickly getting it off to a teammate.

The Midlanders continued to fight, Lynam and Emmet Corrigan pointing, however in reality they were struggling to make any dents on the lead. Another goal from the in-form Matthews on 48 minutes leaving this game essentially beyond doubt.

It started down the other end the field with a chance for Longford for Rueben Murray. A long ball from Lynam was stopped from going over the bar by Louth Keeper Ruairi Morrissey before falling towards the Longford Slashers clubman.

Danny Morgan was on hand to first get a hook in and then duly blocking the rebound, allowing Louth to clear their lines. From midfield Molloy launched the ball towards Matthews, who managed to get away from the keeper and duly tap it into an empty net.

10 points in front now, this contest essentially became a training exercise, more and more scores coming for the Wee County, with substitutes Mark Gahan, Padraig Fallon and Niall Keenan all contributing on a day where 10 different players got on the scoresheet.

Longford continued to press on, given we had nearly 20 minutes left to play, but scores were of a premium as they went in search of goals.

Murray came close on two more occasions before finally hitting the back of the net on 58 minutes. A Lynam free dropped short and was only cleared as far as Murray, who with his grounded strike managed to get the ball past Morrisey.

Another score came and might have hinted at a comeback, however as was the case throughout this match Louth just brushed it off and soldiered on with another flurry of scores, six in succession to dent those slim hopes again.

After struggling in his battle with Matthews, Enda Naughton made a rare jaunt forward late on and powered home an impressive goal. Louth were home and hosed at this stage, the Lory Meagher Cup firmly back in their grasps for a second time in three seasons.