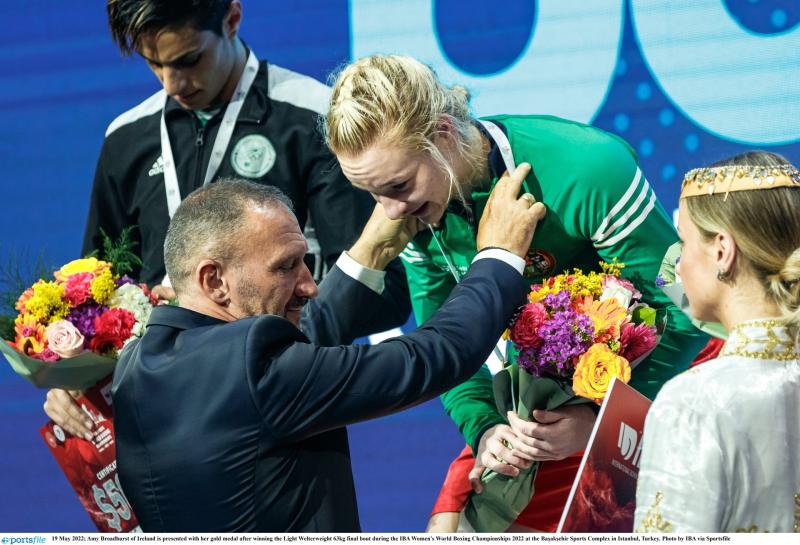 Dundalk’s Amy Broadhurst has become the latest Irish World Champion having convincingly beaten her Algerian opponent, Imane Khelif, in the 60-63 KG Light Welterweight Division at the Women’s World Championships in Turkey this evening.

The St Bronagh’s clubwoman outboxed her opponent in every round, her boxing brain proving decisive as she coasted to an unanimous decision that sees her replicate the success of boxing royalty Katie Taylor and Kellie Harrington.

After coming out of her semi-final with relative ease, a much tougher test was expected against Khelif. The opening exchanges didn’t see a lot being thrown, both fighters keeping their distance which seemed to suit the Algerian. She used her height and reach to land some early jabs.

However the success didn’t last long, Broadhurst managing to sprint under her jabs and get in close, where she could pick Khelif off with ease. In the end the judges could not split the duo, three giving the round to the Dundalk Boxer and two awarding a 10-9 score to the Algerian.

The second round was when we began to see the biggest difference between the pair, ring awareness and a good boxing brain. Despite having most of her success when making Broadhurst chase her down from distance, for much of the second round the fighting was done belly to belly.

From this position, the Irish brawler was in complete control, showing an ability to control the tempo all while landing killer combinations that were sure to impress the watching judges around the ring.

Such was her command in this round, not only did she sway all five judges but convinced two of them to give her a 10-8 score, as Khelif was so far out of the contest. All she needed to do to emulate her sporting idol in Taylor was to stay on her feet for another three minutes of action.

Her Algerian opponent essentially needed a knockdown at this stage to have any hope of winning, needing to overturn one of those judges that had Broadhurst miles ahead and make sure to sway one of the two judges that had the fight all square.

Yet it was Broadhurst who came out the more aggressive fighter, continuing to pick off her opponent. Throughout the nine minutes of action the Algerian was rarely able to trouble the head of the Dundalk fighter, who was able to keep her to just body shots that were having little impact.

As the round drew on, Khelif looked a beaten docket, sitting back and just hoping for a mistake that would let her in for a killer blow. This never came which meant Ireland had its newest boxing sensation as Broadhurst became the third female Boxing World champion Ireland has ever produced.

This is just the latest in a long list of success for the 25-year-old, having already in the past secured the European Youth, Junior and Under 22 titles. But now she can finally call her herself World Champion. Could a stint at the Olympics in 2024 be next for this talented boxer?