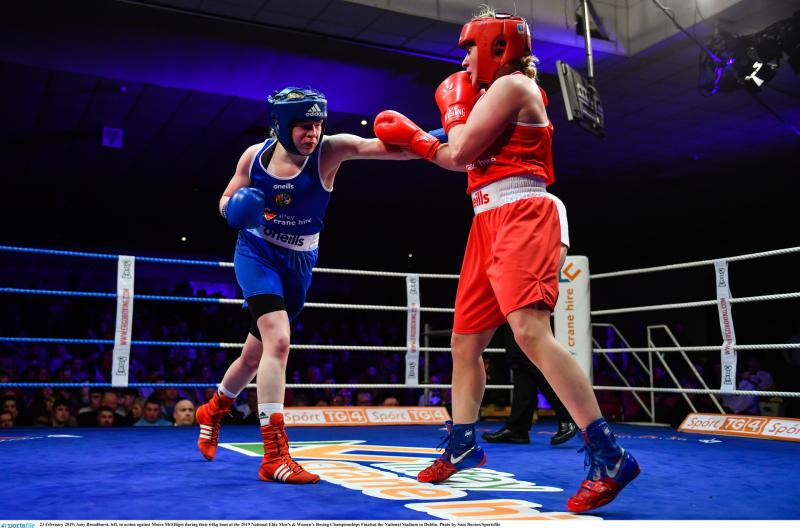 If one good turn deserves another, Amy Broadhurst had no alternative but to return a compliment to Katie Taylor. But what a compliment she had to pay. It wouldn’t have disconcerted her in the slightest.

Let’s first of all turn the clock back to 2012. Taylor, now established as the greatest female boxer there’s been, had just won Olympic gold at the London Games.

A month later, Broadhurst, taking inspiration from her childhood idol, stood atop another podium, a winner at the European schoolgirl championships.

The Dundalk-born fighter was 15 at the time and a student at Dundalk’s Colaiste Ris. As you expect, there were congratulations all round when she came back to school. But that was it, she thought: back to the grindstone now, head down for the exams.

When, a few days later she was told to go the principal, Mr Padraig Hamill’s office, she feared the worst. As she told this paper when featured in the questions-and-answers series a couple of years ago, “My first reaction was, this must be a disciplinary matter – what have I done wrong?

“But as I found out later, this was only a diversionary tactic. While I was in the office, all the other students were being gathered in the assembly hall.”

It wasn’t only students and teaching staff who were there. Also present were her parents, Tony and Sheila, along with teacher, Paula Lavin, who was largely responsible for organising the surprise event.

She got another great reception from the packed hall, and again thought that was it. However, there was an even bigger surprise to come. “Just as things began to settle down, the door swung open and in walked Katie Taylor with her father, Pete, who was her coach at the time.

“I was gobsmacked, just as my father and mother were. They thought it was only going to be a presentation from the school (when they were invited along).”

It didn’t end at that. The Olympic champion made a presentation of a book and a cake to Amy, and the pair had a long chat afterwards. It was a dream come true for the teenager, who, all the time, was aspiring to emulate the girl that had made her the presentation.

A lot has happened since in the ring. Taylor has turned professional, won multiple World titles, and the weekend before last got the verdict in what promoter, Eddie Hearn, said was “one of the greatest fights I believe in the history of Madison Square Gardens”.

Puerto Rican Amanda Serrano, herself several times a World champion, was in the other corner, and the famous New York venue housed a capacity crowd of almost 20,000.

Amy Broadhurst had hopes of making the re-scheduled Tokyo Olympics when she spoke to this paper, but knew she had formidable opposition in Kellie Harrington, who also fights at 60kilos.  It didn’t happen for her then, but Paris in 2024 could be on the horizon and maybe four years after that.

She‘s 25, Harrington is 33, and, for the record, Taylor is 35. Her immediate aim is the World Championships, which got underway in Istanbul last week. She’s been in a training camp in Italy in preparation.

And that compliment she returned to Taylor? Well, you could hardly call it a compliment, more a privilege. Around a month before Bray-born Taylor faced up to Serrano, her camp put out a call to the Dundalk boxer to come over to the USA.

She takes up the story. “I woke up one morning and there was an email from her management, looking for my number to have a chat about Katie’s upcoming fight. Her manager asked would I go over and be a sparring partner for her?” Shortly afterwards Amy was on a plane to Connecticut.

“I was over the moon when I got the email. I mean, what an opportunity, and what a compliment as well to be asked by, in my opinion, the best female boxer that’s ever lived. For her ask to ask for my help, it was just class.”

It wasn’t the first time the girls met. Aside from their Colaiste Ris gathering, they were actually on the same Irish team for the European championships, when juniors, youths and elites were in action together in Hungary.

Both won golds. There have been other encounters, and, no doubt, as she goes in pursuit of other kinds of victories Taylor achieved before leaving the amateur ranks, Broadhurst won’t have far to look for advice or assistance.