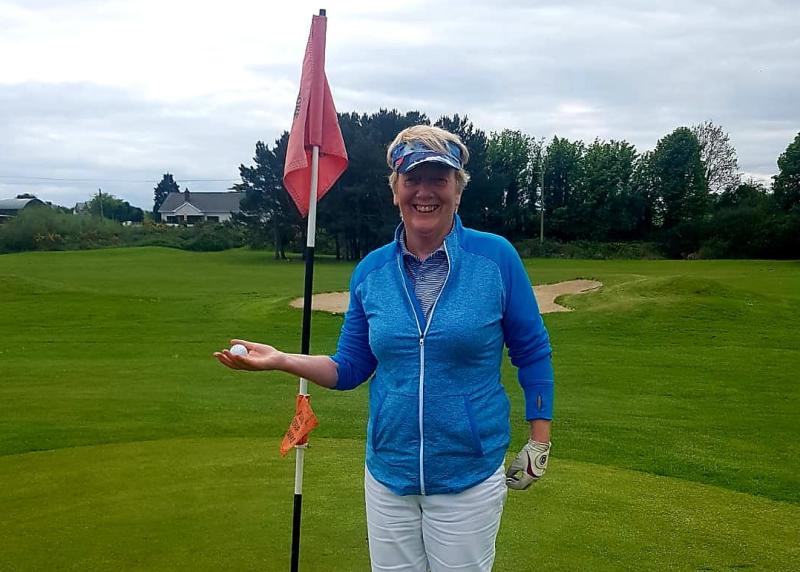 This included the rare and exceptional feat of a hole in one at the 6th where Patricia played a superb 9 iron to a very difficult pin position on the right-hand side just over the pond. Great excitement ensued in the club house where she was given a standing ovation by Lady Captain Rita & members.  Runner up position went to Elizabeth Donnelly (41) with 41pts.

After torrential rain on Friday, the course was playing considerably longer for the Saturday May 7th competition. Elizabeth Donnelly featured again with a sound 38pts with Anne McDonnell (30) on 37pts & in form Marian Jordan (26) taking third position with 35pts on countback.

Today (Saturday May 14th), the holds its Captain’s prize for ladies. This is their first strokeplay competition and counts towards GOY No 3 & Medal. Captain Brendan Tumility will present his prizes on Saturday evening shortly after all cards are returned.

Greenore's first Inter club team play on the 19th of May. The Challenge Cup team, captained by Anne McDonnell, play Forest Little Golf Club with two matches at Home and three away. This is followed on May 22nd when Revive Active 4 Ball also play Forest Little. This team is captained by Margaret Hanley alongside Patricia Brennan.

The minor Cup team captained by Ann Davey will play on May 29th against Roganstown Golf Club.

St Vincent’s Past Pupil Annual Competition takes place at Greenore on June 13th, with timesheet open since Monday.  Please contact 087 9705722 to book your place for the 3rd year of this hugely popular event which was initiated by Anne McDonnell, former Principal of St Vincents’ Secondary School and a Past Captain of Greenore.