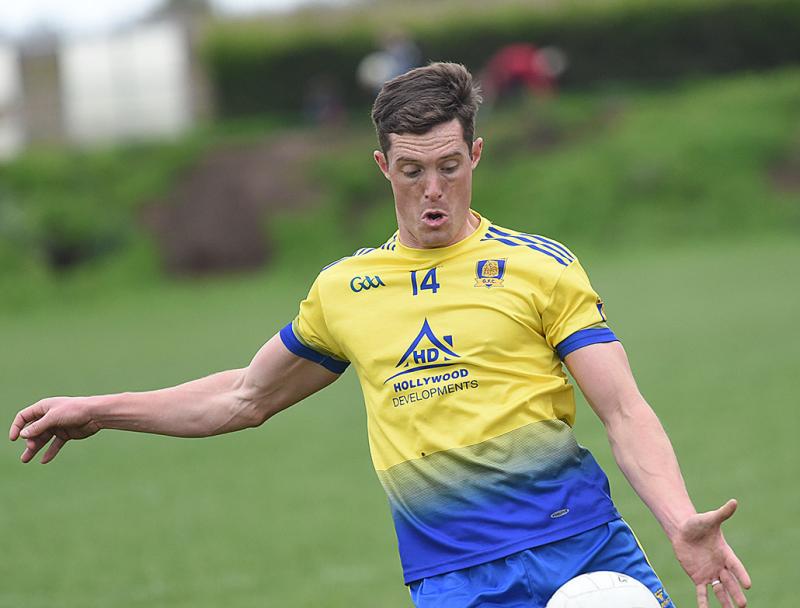 Hollywood Developments Division One Round Four

St Mochtas made it two wins on the bounce as they recorded a six-point win over St Patricks last Saturday evening. The Louth Village men made a slow start to the league campaign having lost their opening two games, but look to be back in the groove with another impressive display.

Not for the first time the stand-out performer, in a fine overall team display, was full-forward Declan Byrne who landed 14 points over the hour. The former county player was off the mark in the early stages as his side kicked the first three points of the game.

Although the Pats responded with scores from Ross Murphy and Adam Finnegan, the Mochtas regained control and further scores from Byrne helped ease them seven points clear. Late points from Tadhg O’Connor and Danny O’Connor saw their side cut the deficit to 0-11 to 0-6 at the break.

The visitors continued to hold the upper hand in the third quarter as they pushed the lead out to nine points. The Lordship men rallied in the closing stages and when Aidan McCann found the net on 54 minutes there were just four points between the teams.

However, the hosts were unable to complete the comeback as the Mochtas scored the last two points to secure a deserved victory.

Geraldines continued their impressive start to the season when they had seven points to spare over Naomh Mairtin on Saturday evening.

The victory sees the McGeough Park side join leaders Mattock Rangers, St Brides and Newtown Blues at the top of the table, while the depleted county champions continue to struggle to find their best form.

Goals from Matt Corcoran and Shane Rogers proved the difference as the hosts came out on top in this game at Haggardstown on Saturday night, against a Mairtins side that saw Conor Whelan and Tom Gray top score with two points apiece.

The first half saw little to choose between the sides and it was the Gers who went in with the most slender of leads as they edged 0-5 to 0-4 ahead.

Once again, the second half saw points hard to come by, with the teams managing just two apiece. However, when it came to raising the green flag, it was the Gers who were on top. Matt Corcoran was first to find the net to put his side in command and victory was completed thanks to a second from Shane Rogers.

St Brides joined Mattock Rangers, Geraldines and Newtown Blues on top of Division 1 following their three point win against Dreadnots at Clogherhead on Sunday afternoon. The hosts took the lead early on with two minors from their half backs, only for the Knockbridge men to level things up by the fourth minute.

The Clogherhead men moved up a gear after this with five unanswered points through Paraic Smith, Daragh Shevlin and Craig Shevlin (3) to put their side well in control with 20 minutes played.

Sean Brennan and Kieran McArdle reduced the deficit to three points before Peter Kirwan slotted over for the men in black and red on 28 minutes. Two converted free kicks from McArdle for the visitors late on left the scoreboard reading 0-8 to 0-6 at the break.

The Reds started the second half the better of the two sides when they outscored the hosts by 1-4 to 0-1 with the goal coming from Ciaran Deane. However, Dreadnots raised the green flag themselves on 43 minutes through Paraic Smith, to leave one point between the teams.

St Brides didn't panic and Emmet Kirk extended his side's lead with a converted free kick soon after. Kirwan reduced the deficit on 49 minutes to the minimum again. But this was his side's last score of the afternoon, as McArdle and Brennan concluded the scoring late on to give St Brides a well-deserved three-point victory.

There was late drama in Ardee as both heavy hitters, St. Mary’s and the Newtown Blues, thought they had landed the knockout blow only for a late Carl Gillespie free that settled this pulsating contest as a draw.

Ardee were two points ahead down the stretch and looked to have done enough for all two points on offer, only for Blues substitute Rob Carr to dramatically swing the advantage in the visitor’s favour. Neither had enough for a winner in the finish.

The half time score was 2-4 to 0-10 as Declan McNamara landed both Blues goals while Darren Clarke was a constant presence for Cathal Murray’s side in the stalemate.

Mattock Rangers went joint top of the Division 1 table after a gutsy away victory in Fr McEvoy Park against Cooley Kickhams. The winless hosts rued a number of missed chances down the stretch as the Collon men hung on.

The opening half was a tight affair with Cian Connor on song with frees for Kickhams, while Adrian Reid rolled back the years with three first half points as Wayne McKeever’s side trailed 0-7 to 0-6 to the hosts at half time.

After the break, another 2010 veteran, Brian White, had a huge say with a number of dead balls and nearly swung the game for Gary Thornton’s men. However, Liam Flynn’s flick to the net would decide this close affair with the visitors coming out on top.

Due to a lengthy delay in the ambulance service getting to the Point Road to treat a serious injury, the clash between Sean O’Mahonys and St Fechins was called off.

With four minutes of normal time to play, St Fechin’s youngster Cathal O’Reilly picked up a knock and taking the utmost precaution to the player concerned the match was eventually forced to be abandoned.