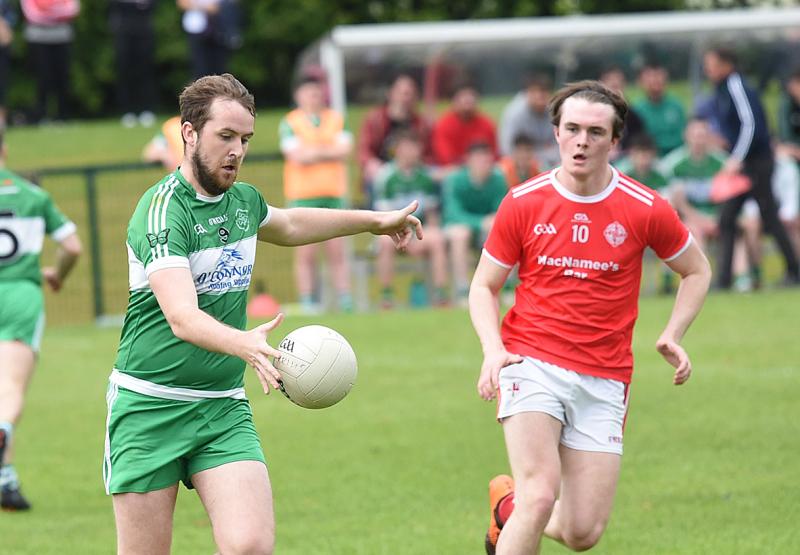 Hollywood Developments Division One Round Five

St Brides moved to the top of the Division 1 table thanks to comfortable win at home to St Patricks on Sunday afternoon.

The result was rarely in doubt after an excellent first half showing from the hosts which saw them build up a ten-point lead. Although the second period was more competitive, the Pats were never in a position to threaten the lead.

The Knockbridge side got off to a flying start as Kieran McArdle’s opening point was followed by a Ciaran Dean goal on four minutes.

The visitors did get off the mark through Adam Finnegan but with Emmet Kirk and Sean Brennan both on target, they stretched their advantage. The Pats did reply with points from Jason Woods and Cathal Grogan but it was the Brides who finished the half with a flourish as McArdle added a second goal to make it 2-7 to 0-3 at the break.

The Lordship side rallied at the start of the second half with points from Cathal Grogan, Finnegan and Tadgh O’Connor. However, any hopes they had disappeared when Grogan was dismissed for a second yellow card.

The hosts were never threatened from that stage, and they cruised home with further points from Neil Thornton and Kirk before Paddy Reilly sealed the win with a late goal from a penalty.

St Mochtas made it two wins on the bounce as they remain in contention at the top of the table thanks to a seven-point win over St Marys. The Louth Village side are just two points off the pace after a strong second half display saw them overturn a one-point deficit at the break.

Once again the home side were grateful for the accuracy of Declan Byrne who finished with a personal tally of 1-11, equalling his 14-point haul against St Patrick’s the previous week.

The opening period proved to be a close affair with the teams trading scores throughout. At the end of the first half hour, it was the Ardee side who had established a 0-8 to 0-7 lead.

The second half was a much more one-sided affair as the home side took control helped by a goal from Byrne. The former Louth player’s points were once again vital in putting distance between the teams.

Meanwhile Jamie Farrell, Andrew English and Conor Garland were also on target on the night.

St Marys were unable to keep pace with the hosts in the second half despite a goal from Ronan Carroll.

Newtown Blues came out on top in this battle of the league leaders, edging home by the narrowest of margins in a competitive outing at Newfoundwell on Saturday evening.

It was the visitors who looked to be on course for another victory when they built up a five-point lead in the first half. However, the Blues gradually reeled them in before scores from Ross Nally helped them clinch victory.

Beanon Corrigan led the charge for the Gers in the first quarter as he landed three points to see his team lead by 0-6 to 0-1. The Blues responded well to that challenge and with Nally finding his range, the teams went into the break level at eight points apiece.

The Blues continued that momentum at the start of the second half as points from sub Robert Carr and Nally saw them open up a gap. The Gers responded through Michael Rogers and Corrigan to cut the gap to one. However, they were unable to complete the comeback as the Blues held on for victory.

Mattock Rangers remain top of the pile in Division 1 after overcoming the challenge of St Fechins in Collon on Saturday evening.

First half goals from Ben Watters and Shane Hickey proved the difference between the teams as the hosts remain level with Newtown Blues and St Brides at the top of the table.

The Collon men got off to the perfect start when Ben Watters opened the scoring with a goal.However, the visitors responded well and points from Ryan Walsh and David Collier saw them get back on terms.

Ben Watters was continuing to have an influence on the game and he was pulled down for a penalty, which allowed Hickey to find the net for a second time, and help his side lead by 2-6 to 0-5 at the break.

The second half saw the Fechins battle to get back into contention and they gave themselves hope with scores from Walsh and John O’Connell. However, they were unable to conjure up the goal they needed to put real pressure on Mattock and the hosts held out for victory.

Cooley Kickhams moved off the bottom of the Division 1 table thanks to this impressive four-point victory over Naomh Mairtin on Saturday evening.

The peninsula side made the trip to Monasterboice on the back of four successive defeats but they came good on the night to get off the mark for the season.

Goals from Darren Marks, Patrick Johnston and Paddy Hanlon ensured the Kickhams came out on top despite a late rally from the hosts.

In a tight first half it was Marks who found the net to ensure his side went in with a 1-5 to 0-5 lead. They were given a further boost in the third quarter when Johnston added the second goal.

Cooley were in a strong position at that stage but the Mairtins hit back with a goal from Tom Gray before a Conor Whelan free cut the gap to a minimum. However, Cooley were not to be denied and a quick break ended with Hanlon firing home the decisive goal.

Dreadnots claimed their second win of the league campaign as they held off the challenge of Sean O’Mahony’s at the Point Road on Saturday.

The Clogherhead men had to come from behind at the break but two second half goals ensured that they claimed a second win of the season to move into a mid-table position.

The Dundalk men had the better of the first half and they scored the opening goal of the game to lead by 1-5 to 0-4 at half time. Terry Kelly was among the points while Stephen Kilcoyne found the net for the hosts.

Ben McLaughlin kicked three points in the third quarter, but the visitors raised their game in the second half and were given a boost when Pepe Smith found the net.

Encouraged by that score, they continued to push forward and a second goal from Craig Shevlin five minutes later helped them clinch the victory.