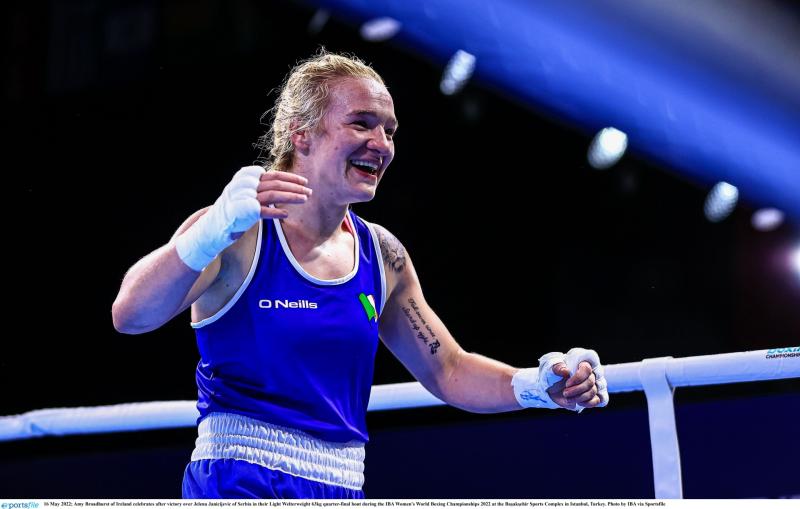 Dundalk’s Amy Broadhurst is just one fight away from securing a Gold Medal after a decisive victory over India’s Pavreen in 60-63 KG division at the Women’s World Boxing Championships in Istanbul earlier this afternoon.

The Dundalk Boxer became just the third women from Ireland to reach a world decider and could not be in better company, alongside Katie Taylor and Kellie Harrington. She would be followed soon afterwards by Lisa O’Rourke.

A mix of controlled aggression and some top-class defence when needed saw her secure the bout by spilt decision, 4-1, with two judges awarding her the contest by a comprehensive 30-27 margin meaning she had won all three rounds.

After a short feeling out period from both boxers, Broadhurst went on the aggressive early in the first round. She favoured landing the blows via a flurry of left and right hooks that her 22-year-old opponent struggled to defend.

She fought back as best she could, but the better shots continued to come from the Irish boxer, whose selective approach in the final minute saw all five judges award a 10-9 score in her favour.

The selective shots continued from both fighters, neither wanting to get sucked into a brawl. Broadhurst began throwing more jabs now as she continued to do her best to control the match. However, Pavreen was getting better and more confident as the bout progressed.

Behind on all the scorecards, the Indian finished the round strongly and left the scoring for the second round mixed. Two judges again went for the Dundalk boxer, three going for Pavreen.

That meant Broadhurst was almost guaranteed to be ahead on two of the judges final scores and would need to win over just one of the other three to secure the bout. Those three having the fight all square.

The current score was clear in both competitors' approach to the final round. Pavreen going gung-ho while the St Bronagh’s clubwoman showed off her defensive side, which again clearly also impressed the judging panel.

Pavreen was throwing a relentless wave of pressure Broadhurst’s way early in the third round, but she remained calm and was superbly weaving, ducking, and dodging her way out of danger. When needed she clutched onto her opponent too, as she masterfully winded down the clock.

Even when tagged, she was able to bounce back with a couple of good shots of her own and come the final bell looked extremely confident it would be her hand that was raised by the referee.

Her announcement as the winner brought her huge excitement, as she joyfully strutted around the ring, knowing her bronze medal had at the very least now become a silver.

Broadhurst will fight for the World title against Algeria's Imane Khelif in Thursday's evening session, after she came out on top in a gruelling slog against the Netherland’s Chelsey Heijnen.

Although winning by unanimous decision, the fight was a proper scrap that was contested at a high tempo. This could prove helpful for Broadhurst given the short turnaround from the semi-final to the final. But regardless she is sure to be a tough challenge, given what is on the line.