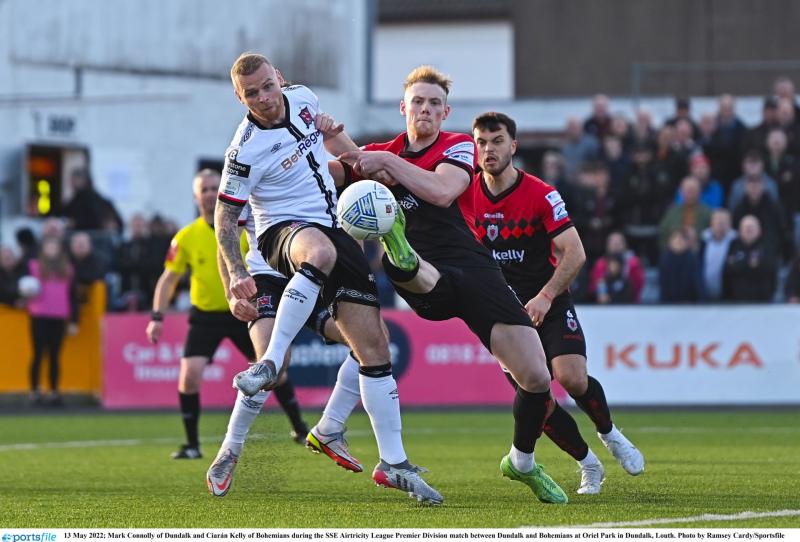 Dundalk FC defender Mark Connolly admits he is unsure what the future holds, with his loan agreement at the Oriel Park club set to expire in just over a month’s time.

Connolly joined The Lilywhites in January on a six-month deal from Scottish Premiership side Dundee United, where his contract doesn’t run out for another year.

The 30-year-old Clones native has been a colossus at the heart of the Dundalk defence throughout his 13 appearances so far but has been linked with teams in the Irish League.

Speaking with The Democrat on Friday night, Connolly said: “I still have another year at Dundee United, so obviously there will be talks happening probably soon enough.

“We need to speak to Dundee United and we need to see what happens. Being close to my mother, especially when my father died, I always wanted to come home.

“I need to wait and see what happens in the next few weeks, so hopefully we’ll have more of an idea. I’ll obviously speak to them hopefully in the next week or two, and then hopefully speak to probably Dundalk here, and we’ll see what comes up.

“I don’t know who I’m linked with, but my focus is fully with Dundalk at the moment. Until my loan finishes, and until I hear otherwise, I’ll be fully committed to Dundalk.

“I’m happy since I came back, but I’m still a Dundee United player. I still have another year left in my contract, so I need to have discussions with them and I’ll go from there.”

Connolly returned to the Dundalk side for Friday’s 3-1 win over Bohemians in the SSE Airtricity League after serving a one-match suspension for picking up five yellow cards.

The ex-Crawley Town defender put in yet another stellar display as Dundalk maintained their unbeaten home record – despite admitting that he was carrying a hamstring injury.

In fact, Connolly, who partnered Sam Bone at the back, likely wouldn’t have featured at all against Bohs had Brian Gartland not been injured and Andy Boyle not suspended.

“It’s good to get back,” said Connolly. “Obviously very disappointed with the five yellow cards and stuff and being suspended. You’re getting into a routine of games and you miss a week and stuff. I picked up a slight knock on my hamstring as well.

“It’s been there the past week or two weeks. I just wanted to make sure I got through tonight, and thankfully I did, especially with Boyler being suspended and Garts being injured. I’m just delighted to get back in and delighted to get the win. We were obviously disappointed last week when we didn’t get the win away to UCD.”

Connolly played 90 minutes as The Lilywhites came from behind in the second half to beat Bohs, courtesy of goals from Patrick Hoban, Robbie Benson and Paul Doyle.

“They have some very good players. Whenever they’re defending, they have a few of their attacking players cheat in the forward areas. I think we done well. I thought Sam Bone came in tonight and done really well in centre-half. I think that’s another big win for us.”