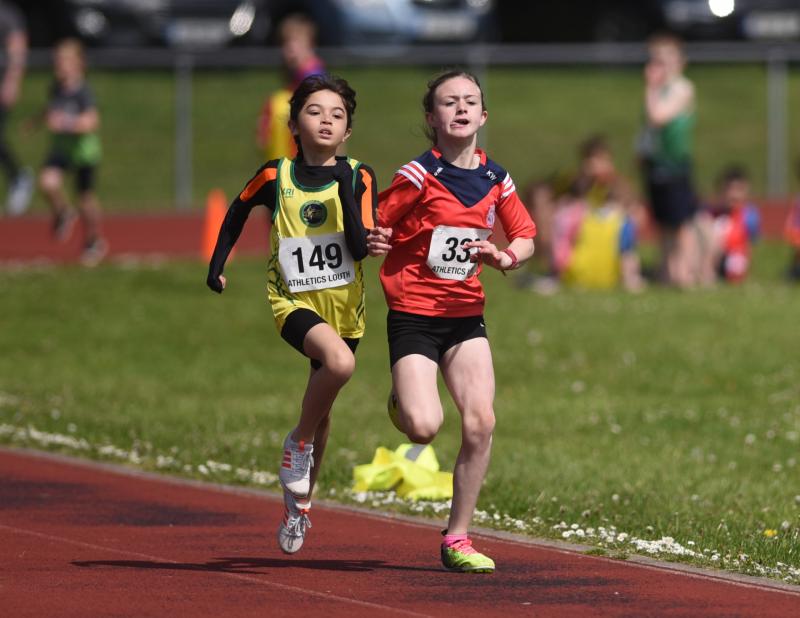 The weather gods were very kind in Bush last weekend for the Louth Juvenile Outdoor Track & Field Championships, for what was a wonderful event in the glorious sunshine.

St Gerards AC had its largest ever contingent of athletes competing at the Championships, with no fewer than 68 young hopefuls making the short trip.

The haul of medals for the club’s athletes was breath-taking and a testament to the hard graft put in over recent months. The final tally for the Saints was 55 county medals - 23 Golds, 21 Silvers and 11 Bronze in addition to several ‘Personal Best’s performances (PBs).

The icing on the cake to top off the club’s most successful County Championships in its 40-year history was four New Championship records after two days of fabulous athletics.

The atmosphere around the Bush track was electric over the two days, with many expressing their joy in seeing the normal order of business return without restrictions. The sense of ‘team’ amongst the club’s athletes was palpable, as the children loudly and proudly supported their teammates.

It was an extraordinary effort, with parents and coaches sharing in the highs and lows and the ups and downs. This Championships had it all - sprint finishes in distance races, late surges, close shaves, photo finishes, numerous personal bests, championship records, proud as punch kids, even prouder parents and coaches.

The club fielded a host of young athletes competing in their first ever county championships, with many just missing out on a podium position and showing great promise for the future.

Debutant Anna Gladysz claimed Gold in the U9 300m with a determined sprint finish. Also competing in the championships for the first time, Katelynn Woods had a great day at the office, picking up Gold for the 60m, the Turbo Javelin and the 500m in the U10 events.

Calvin McCourt won the 60m, the Long Jump and Turbo events in the Boys U11 category, while Aaron Mulligan took home two Golds for the U14 80m and 200m.

Grainne Moran retained her title in the Girls U16 100m while Tara O’Connor set a new record in the High Jump and took the top spot in the Hurdles.

Record number two and three went to Maebh O’Connor in the Long Jump and the Javelin to make it three Golds following her 200m sprint win.  The fourth new county record went to Andrew Rosbotham for the Shot Putt.

The U17 Girls and Boys sprints were dominated by St Gerards, with Ciara Cunningham taking Gold and Rachel Culligan claiming Silver respectively in the 100m, the 200m and the 400m races.

Meanwhile, Javier Lopez Navarro completed the double in the 100m and 200m events in the Boys’ events. Erin McGee picked up Gold for the U17 Girls Javelin, while the U16 Boys Shot Put was won by Anthony Urbanski in his first major competition.

With 32 more visits to the podium for silver and bronze medals for the St Gerard’s athletes, it will be a weekend which will be remembered for a long time to come, and deservedly so.

Huge credit and massive thanks to Louth Athletics, the County Board and all officials for a wonderful weekend of competition, which ran smoothly throughout in an incredibly positive atmosphere.