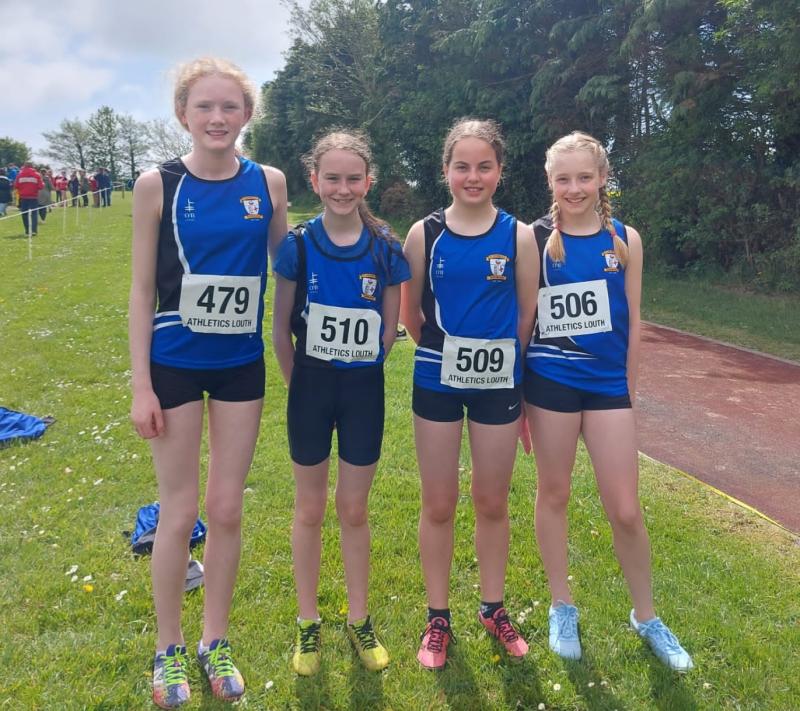 The Louth Juvenile Track & Field Championships took place over the weekend of the 7th & 8th of May. The weather was fantastic and the large number in attendance were treated to a fantastic couple of days of Athletics.

The St Peter’s Club had a fantastic Championship, and all the Athletes did themselves and the club proud.  Colm Duff made his Championship debut in fine style narrowly missing out on a medal in the U9 60M sprint with a fourth-place finish in the final.

Thomas Staunton made his Championship debut for The St Peter’s Club with a fantastic effort in the boys U13 60M sprint winning a fantastic bronze medal. The girls U13 race saw Niamh Allen claim both jumping titles with a fantastic last jump of 4.08M to take the Gold medal. She also secured a high jump gold.

Tatiana Zenderowska was desperately unlucky not to medal in the same Long jump competition, missing out by the narrowest of margins to finish in fourth place in both the Long Jump and High Jump. Grace Carey also made it through to the long jump final, jumping very well as did Shauna Mooney.

Emily and Hannah O’Reilly had strong performances in both of the U14 girls track events, as did Laura Duff in the long jump. Deirbhile Morgan had a strong run in the girls U14 800M race and was unlucky not to take a medal.

The star athlete of the Championship for St Peter’s had to be U14 Athlete Donnacha Reidy, winning four medals, three of which were Gold. He was top of the pile in both the 800M and 1500M races, as well as in the Long Jump, while also securing a bronze in the 80M sprint final.

Mia Finnegan followed up her bronze medal in the javelin by winning Gold in the Girls U15 shot putt with a new PB of 7M. Dearbhla Allen bagged herself two silver medals in the girls U16 800M and 1500M, which when added to her recent victory in the 1500M North Leinster schools was a good few weeks work.

Harry O’Reilly made an impressive return to the track winning bronze in the U16 boys 1500M and going one better by winning silver in the 800M. Sean Reilly was a very impressive winner in the both the boys U17 800M & 1500M, races taking the Gold medal in both.

Rory Mc Loughlin was a very impressive winner in the boys U19 1500M, moving up from his usual 800M distance in which he also won bronze, coming just behind his training partner Cian Gorham who took the silver.

Mark Litchfield also had a strong run in the same race and thankfully after a good block of training is starting to show the potential he has.  Sean Allen made a welcome return to Championship track action, cruising to victory in the boys U19 400M race.

Niamh Brady was again victorious in the girls 800M U19 race, having won silver in the 1500M race. Judith Bell was also on top of the podium, taking Gold in the girls U19 Long Jump.