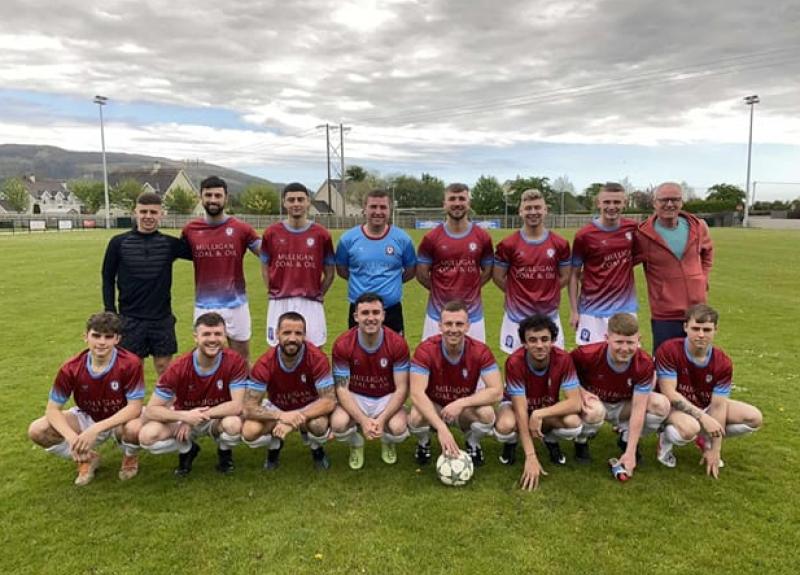 St Dominics became the first team to go through on goal difference in the 116 year history of the Dundalk and District League, winning Group B of the Clancy Cup with plus 2 goals against Bay United's plus one, after finishing with 4 points apiece following a 2-2 draw.

In a very competitive encounter, St Dominics got off to a perfect start, scoring in the first few minutes of the match, Dean Shield scoring in a crowded goalmouth from a corner kick. Midway through the first half a superb free kick from the touchline by Gustus Pupelis beat Dom's goalkeeper Jason McConville to level the match.

In the 42nd minute referee Brian Murphy awarded a penalty to the Saints, which Gavin Gaffney dispatched to give the Friary side a 2-1 half time lead. Five minutes into the second period Bay were awarded a penalty and Adam Larrigan made no mistake from the spot to level the match once more, beating stand-in keeper Dean Shield.

Both sides had their respective keepers performing at the top of their game to deny any more scores, indeed Oisin Norman made a series of spectacular saves for Bay, even after the Saints were reduced to 10 men following a sending off with 29 minutes of the game left.

The victory sends St Dominic's into the semifinals along with Rock Celtic, winner's of Group A. Rampart Celtic made sure of a semifinal spot with a 6-2 win over Glenmuir United, as they strive to win the cup for the third time in a row.

The first time the Clancy Cup was played in group format was in the 1996 season, Pegusus defeating Quay Celtic 1-0 in the final to win their first trophy thanks to Andrew Mullhollands second goal.