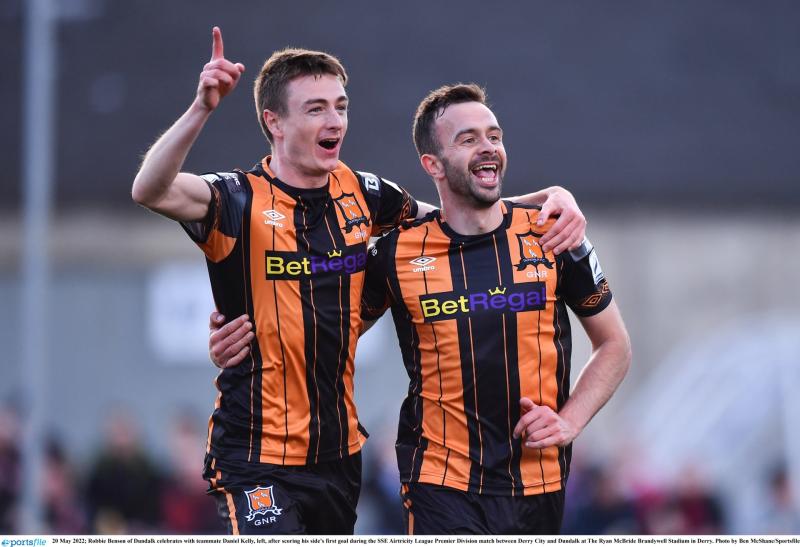 Dundalk FC have won on the road in the SSE Airtricity League for the first time this season after defeating Derry City 2-1 at the Ryan McBride Brandywell Stadium.

A wonder goal from Robbie Benson had put The Lilywhites in front early on, but Derry levelled matters 15 minutes from time through substitute James Akintunde.

There was more drama as Dundalk grabbed all three points, thanks to Patrick Hoban’s eighth goal of the season, but head coach Stephen O’Donnell was sent off afterwards.

O’Donnell made one change from the 3-1 win over Bohemians the previous week, with Paul Doyle restored to the midfield in place of Joe Adams who dropped to the bench.

It was Benson who opened the scoring, getting away from Shane McEleney before unleashing a left-foot shot from outside the box which flew into the bottom corner.

At the other end, Derry went in search of an equaliser, and Joe Thomson had a volley kept out by Nathan Shepperd before Eoin Toal headed over from the resulting corner.

Derry had another good chance when a Ronan Boyce cross was met by the acrobatics of Jamie McGonigle, but Shepperd was on hand once again, this time gathering safely.

The Candystripes did finally level matters on 75 minutes when a Will Patching set-piece delivery from the right was finished by the brilliant diving head of substitute Akintunde.

However, their jubilation was short-lived as Dundalk regained their lead on 82 minutes when substitute John Martin slipped in Hoban, and he finished superbly to make it 2-1.

Patching had a free-kick rattle the crossbar in the fifth minute of stoppage-time, as Dundalk claimed a win which moved them to within four points of Derry in second place.