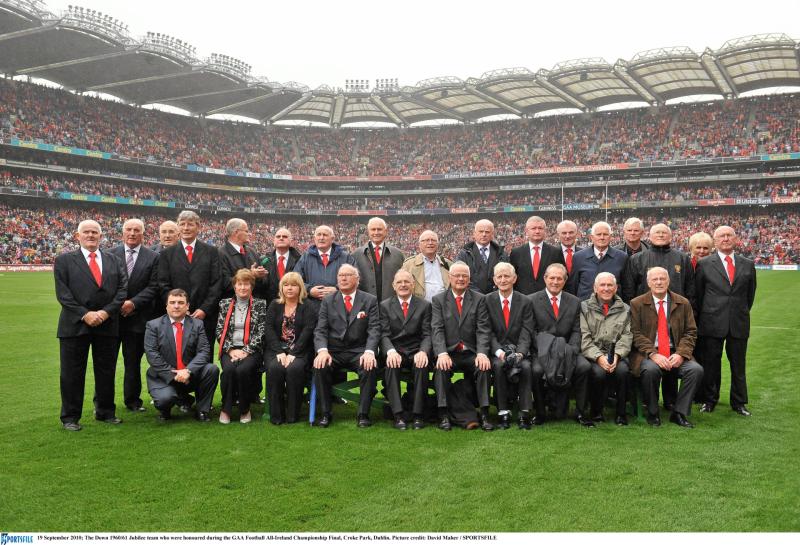 There are enough years on the clock for me to have vivid memories of the great Down teams of the late 1950s and early ‘60s. Here was a team whose black-and-white was a colour new to Croke Park.

So, too, was their style of football. It was practised by fast-moving forwards who knew where the posts were; defence was rock-solid, and at midfield the elegance of Joe Lennon was combined by the power and high fielding of Jarlath Carey. Eamon McKay kept a good goal.

There was evidence of what was to come in ‘59. Down’s win in that year’s Ulster final was their first ever. Only twice prior to that had they played in a final, taking a hiding from the then-kingpins, Cavan, on each early 1940s occasion.

Galway ended ’59 All-Ireland hopes at the semi-final stage, but by the time that August 23rd meeting came around, Down had a first National League title in the bag, the Kevin Mussen-captained side scoring an historic win over Cavan who had Roche Emmets’ Mickey Brady at wing-full.

Down would have been favourites to retain the Ulster title, but not add the All-Ireland. This was supposedly ear-marked for the holders, Kerry, whose semi-final passage was uninterrupted by Galway.

Down had two semi-final matches to play to get the better of an emerging Offaly side, whose Leinster final win – their first – had been at the expense of Louth.

The 1960 game is part remembered for James McCartan’s fortuitous goal, the rugged 40-yard man’s long-distance shot deceiving Kerry ‘keeper, Johnny Culloty. This score played a huge part in Down’s 2-10 to 0-8 win. The occasion, however, was about much more.

There was the triumphant return to the Mournes, Mussen carrying the Sam Maguire across the border for the first time, and then after that, the reception given to the team by a Unionist Lord Mayor at Belfast’s City Hall.

And there was the stop-off at Dundalk the day after the game, when townspeople turned out at the town square in numbers almost as big as those assembled in the same area 13 years earlier.

If style was central to Down’s win over Kerry, strength and much more was needed when they went to defend their title twelve months later. Offaly weren’t known for standing on ceremony, and Down needed to be up for the challenge.

When Down regained the Sam Maguire in 1968, the best of football’s forwards, Sean O’Neill, was still in the No 14 jersey, weaving all his magic and claiming crucial scores; Joe Lennon was now at half-back and had the captain’s arm-band, and Paddy Doherty was another to win a third All-Ireland. Paddy was good to put frees over and also score from play.

Let’s go back to the 1960 final. Mick O’Dwyer is marking Doherty and coming towards the end of the game he asks the Down man how long there is to go. “At least twelve months for you, Mick,” came the answer.

Pete McGrath pieced together a fine Down team to win the All-Ireland in 1991, beating Meath in the final, and then came back three years later to regain the title, this time getting the better of Dublin. It was an achievement that should have made the Rostrevor man a shoo-in when next he showed an interest in the job. But it didn’t.

Before that, James McCartan, son of the aforementioned player of the same name and a member of McGrath’s two winning teams, went close to joining the ranks of an exclusive club, those who played on, and managed, an All-Ireland-winning side. Down’s defeat by Cork in the 2010 final was by just one point.

How different all of the forgoing and the situation Down find themselves right now. McCartan is back in the hot seat, having answered the call when, seemingly, no-one else would.

He oversaw a traumatic league campaign, Down losing their Division Two status and after that his team went out of the championship at the first time of asking.

When he should have expected it, McCartan didn’t get 100% support from the Kilcoo team, who late last year added the All-Ireland to the title they had won at provincial level. Among those who didn’t get involved was the club championship’s best player, Conor Branagan.

And only very recently, Ryan McEvoy, one of the seven Kilcoo players who made it onto the championship’s best team, handed back his black-and-red jersey.

Those of us on the outside, who delighted in the colour and style Down brought to the county scene, wonder what has gone wrong in the county. The one-time artists are now, at best, artisans, non-earning ones at that.