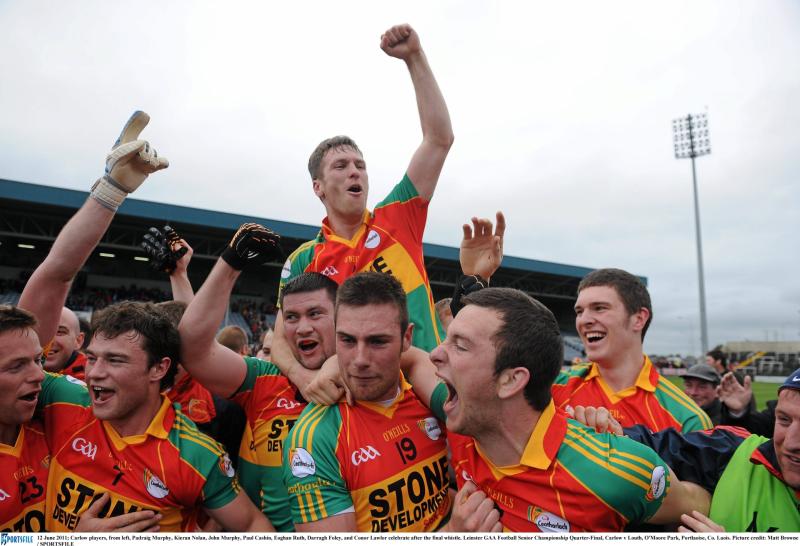 Louth were expected to easily account for Carlow back in 2011, yet it was the Barrowsiders who were celebrating come the final whistle. (Pic: Sportsfile)

Louth seniors should tread warily at Navan on Sunday week. They are overwhelming favourites to beat Carlow in the opening round of the Leinster Championship and on all known form should advance for a quarter-final meeting with Kildare. Carlow finished second-last in the league’s Division Four.

However, it might do no harm to keep expectations in check, be a little cautious, bearing in mind what happened when the sides last met at this stage of the competition.

The June 12 clash at Portlaoise in 2011 was expected to be a cakewalk for Louth. This was just a year after the Reds had been cruelly denied in the provincial decider.

After that there was an appearance in the O’Byrne Cup final with Kildare at Newbridge. Again, there was no luck on offer; a late goal gave the locals a 3-9 to 2-9 win.

But it was better in the league campaign which followed. On travelling to Dan Fraher’s Field in Dungarvan to take on Waterford in a last-round Division Three match, Louth found themselves not knowing where their future lay.

Lose – as they had done in each of their three most recent matches after making a fine start to the campaign – and it would be Division Four football the following season.

Win? Well, there could be promotion, but for that to happen there would have to be the right results – some of them highly improbable – in other matches.

Waterford struck the post when showing front at a crucial stage – having survived this, Louth went on to win by 1-11 to 0-11. Sighs of relief turned to cheers when word came through from the other venues.

Remarkably, the final table was reading in Louth’s favour – there’d be a meeting with Westmeath at Croke Park in the final. This, too, resulted in a win.

So, as they geared up for Carlow, Louth were boasting of having contested three finals in less than a year, winning one, getting pipped in another, and, to put it at its mildest, having their pockets picked in the other.

If the bookies were offering cramped odds about a red win, there couldn’t be any complaints from punters in these quarters. Aside from their team having hit the dizzy heights, they could read the tale carried in the record books. Never before had a Carlow side beaten Louth in a fixture of this kind.

There’s always a first time for everything, and sadly for Louth this was it. Shane Lennon contributed 0-6 to his side’s tally, but thirteen points were one short of the Carlow score.

If there were no recriminations afterwards it was because it was soon after the final whistle that the draw for the All-Ireland qualifiers was made. Louth would play Meath – immediately thoughts turned to the sides’ previous meeting less than twelve months earlier.

Meath won this one fair and square. The Breffni Park game ended 5-8 to 2-8, Darren Clarke, then playing with St Sylvester’s in Dublin, scoring 1-8 for Louth and Paddy Keenan getting the other goal. Seamus McEneaney, then in his first year as Meath manager, said the result “answered all questions”. No-one asked him to explain.

Another fact from far off. On the way to winning the 1957 All-Ireland, Louth opened their Leinster campaign with 3-4 to 0-4 first-round win over Carlow. The game was played at Pairc Tailteann, and Dermot O’Brien top-scored with 2-1. Only eight of the team that day figured in the All-Ireland final.