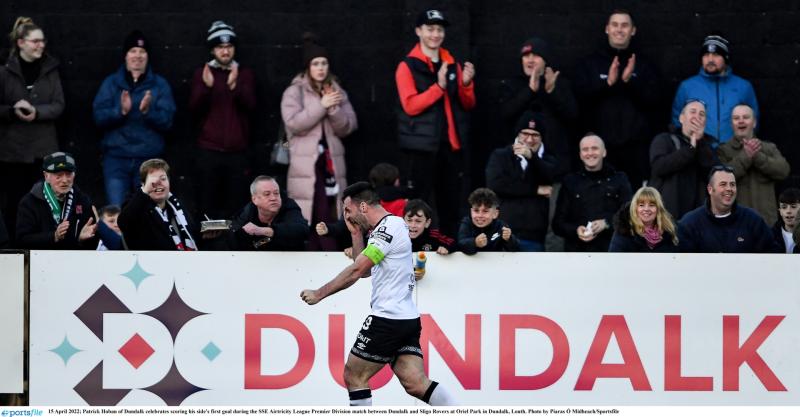 Dundalk moved up to third in the SSE Airtricity League after beating Sligo Rovers 2-1. First half goals from Patrick Hoban and Daniel Kelly were enough for The Lilywhites – although Max Mata’s late header for Sligo made it a rather nervy finish for the hosts.

The game’s first chance fell to the hosts when skipper Hoban neatly slipped Steven Bradley in, but Sligo goalkeeper Ed McGinty made himself big to deny the Dundalk man.

Sligo forward Aidan Keena’s turn and shot was easily gathered by Nathan Shepperd, before at the other end, a good Greg Sloggett cross was flashed wide by the head of Kelly.

The visitor’s best chance of the first half came when the ball broke to Mata inside the area, but Dundalk’s player of the month, Shepperd, denied the New Zealander.

The Lilywhites took control again after that Sligo chance, however, with McGinty parrying Kelly’s shot on 18 minutes before quickly getting up to gather from the rebound.

Stephen O’Donnell’s side went ahead on 34 minutes when Bradley’s cross was palmed away by McGinty, but only as far as Hoban, who expertly finished at the back post.

Dundalk were hungry for more goals before the half-time break, with Sloggett’s low drive – via a wicked deflection off Nando Pijnaker – having to be well gathered by McGinty.

However, they did find a second goal two minutes before the interval when Bradley brilliantly evaded the challenge of two Sligo players before playing Kelly through, with Dundalk’s number-seven coolly slotting through the legs of the helpless McGinty.

As a consequence of that goal, the game petered out as a contest in the second half, but Sligo substitute David Cawley tested Shepperd with a snapshot effort on 63 minutes.

Dundalk pushed for a third after that, with Darragh Leahy’s header saved by McGinty – not long before a Joe Adams attempt from distance stung the hands of the Sligo keeper. McGinty had a busy night at Oriel Park, and he saved well from Bradley on 76 minutes.

Sligo got themselves back into the game with three minutes remaining when a long throw-in from Paddy Kirk somehow found its way into the net via the head of Mata.

A couple of nervy moments for the home crowd followed, but they hung on to collect their third win of the year, making ground on league leaders Derry City in the process.